It is three years since a Liverpool player won the PFA Player of the Year award, but will that change next season? 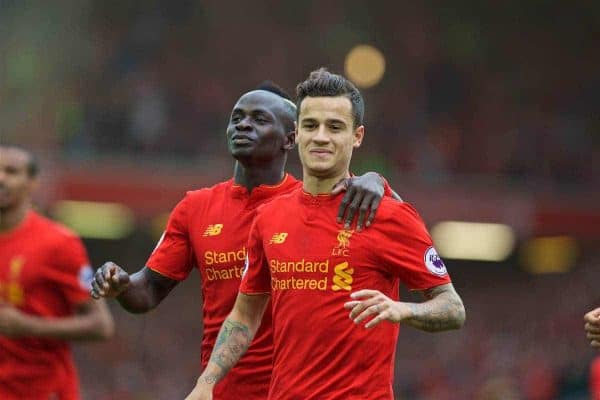 Luis Suarez was handed the prestigious trophy in 2013/14, following one of the greatest individual seasons in Reds history.

Since then, Eden Hazard, Riyad Mahrez and N’Golo Kante have taken home the award, in what is one of the most well-respected accolades in the English game.

Such is the quality within the Premier League, predicting next season’s winner is bordering on impossible, but there are some standout candidates.

A sprinkling of Liverpool players are definitely in the mix, alongside some equally high-profile stars from rival clubs.

Here’s how Footy Accumulators see things currently, with odds sure to change once more high-profile signings are made this summer.

Liverpool trio in the mix

Philippe Coutinho is a player who is loved by Liverpool supporters and admired greatly by rival fans, and it is no surprise to see him as the Reds’ leading candidate for the award.

The 25-year-old is 20/1 to scoop the prize, and given some of his sensational performances last season, you could easily see him being in with a real shout, if he stays fit.

His injury against Sunderland last season halted Coutinho when he was flying, and it impacted on Liverpool’s season in the process.

Sadio Mane (25/1) is not far behind, with the Senegalese superstar enjoying a wonderful first season at Anfield. He has the ability the blow opponents away next season, and find himself right in the mix for PFA Player of the Year.

Adam Lallana is also 50/1, but with Coutinho expected to feature more centrally in 2017/18, what will that mean for the England international’s playing time? Only Jurgen Klopp knows.

If you’re feeling really bold about an injury-free Daniel Sturridge enjoying the best season of his career, he is 66/1 for the win.

Eden Hazard is the runaway favourite to win the award for a second time, with the Belgian currently 7/1. There are still some reports linking him with a move away from Chelsea, however.

Harry Kane (12/1) is next, as he continues to mature into one of Europe’s most deadly finishers, while Paul Pogba (12/1) may well enjoy a far better season this time around at Man United, unfortunately.

Alexis Sanchez (14/1) and Dele Alli (14/1) complete the top-five – Coutinho is sixth-favourite – but the Arsenal man is a risk because he may leave the Emirates and head to a different league this summer.

Sergio Aguero has never won the award, which may come as a surprise, and the world-class striker is an appealing 20/1 to end that drought. He is not certain to play regularly, however, with Gabriel Jesus (40/1) around.

Kante is 25/1 to win the award for a second consecutive season – something only Thierry Henry and Cristiano Ronaldo have achieved since the award began in 1973/74.