There will be some superb strikers battling out for the Premier League Golden Boot award in 2017/18, but are any Liverpool players in with a shout? 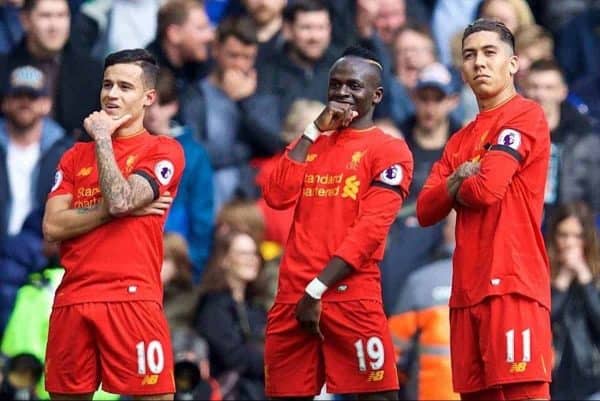 The Reds were often potent in front of goal last season, scoring 78 times in 38 league matches, and often looking the most entertaining attacking team in the country.

The goals were fairly evenly shared, however, with Philippe Coutinho (13), Sadio Mane (13) and Roberto Firmino (11) all in double figures, but not getting too close to the 20-goal mark.

Although the bookies are wrapped up in Wimbledon, several bookmakers have already provided us with Golden Boot odds well ahead of next season. So the question remains: where do the Liverpool forwards rank alongside their fellow top flight attackers?

Mane leads the way for Liverpool, with the flying winger 33/1 to top the pile and enjoy a blistering second season at Anfield.

Despite potentially struggling for playing time next year, and his Anfield future being unclear, Daniel Sturridge is Liverpool’s second-most likely player to win the Golden Boot. That says all you need to know about his pedigree.

The 27-year-old is 40/1 to take home the award, and if he can mitigate his predisposition to injury and find a way back into the side on a regular basis, that is extremely good value. It’s a big ‘if’, however.

Firmino is next up at 50/1, which once again looks enticing, even though the Brazilian is not the most natural goalscorer in the business. Jurgen Klopp is a huge fan of the Brazilian, and he is the type of player you could imagine suddenly enjoying a stunning campaign. The key is fitness and Klopp’s use of him.

Coutinho finished 2016/17 as Liverpool’s top scorer, and like his compatriot Firmino, he is also 50/1 to finish the league’s top scorer.

That doesn’t look a good bet, however, especially as there is talk of him being used in more of a central midfield role next season. For him to net more than all of the top strikers in the division would take some doing.

New signing Mohamed Salah is yet to have odds given to him. Unfortunately, there are a chunk of top class marksmen who are tipped to score more than Liverpool’s key attackers next season, with a huge array of talent in the mix.

Harry Kane (11/4) is the favourite for the trophy, having won it last season, as the Tottenham and England striker continues to prove he is far from a one-season wonder.

Romelu Lukaku (11/2) is Kane’s closest challenger, and if he leaves Everton for a bigger club, as is fairly likely this summer, he could be a really good bet. The Belgian is a hugely effective flat-track bully.

Man City duo Sergio Aguero (6/1) and Gabriel Jesus (7/1) are both worth a punt, but will Pep Guardiola start them both week in, week out? On last season’s evidence, he won’t.

Diego Costa (8/1) and Alexis Sanchez (10/1) look poor value right now because their futures are up in the air, so a few quid on them would be a risk.