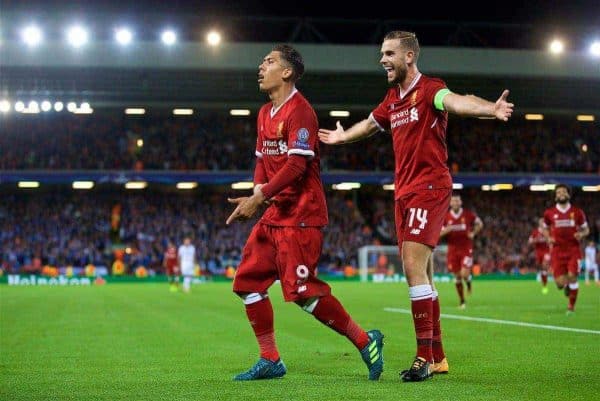 “Champions League nights are back at Anfield!” – Fans react to Liverpool 4-2 Hoffenheim

Liverpool sealed their place in the Champions League with a 6-3 aggregate win over Hoffenheim, leaving supporters relishing the season ahead.

Having taken two priceless away goals from the Rhein-Neckar-Arena the previous week, Jurgen Klopp‘s Reds hit cruise control at home as they blazed to an emphatic win.

A brace from Emre Can and strikes from Mohamed Salah and the imperious Roberto Firmino sealed a 6-3 aggregate win, despite Hoffenheim hitting back through Mark Uth and Sandro Wagner.

Liverpool can now look forward to the Champions League group stage draw, as they return to Europe’s elite for the first time since 2014.

Here’s how supporters saw Wednesday night’s 4-2 win on social media and our forums.

Can got the Reds off to the perfect start…

“Someone get that man a contract FFS.”

– Semmy on the forums.

Looking good !! @LFC 1 Vs HOF 0
Emre Can after a beauty backheel of Mane !! @ChampionsLeague back at Anfield!!

And Salah made it 2-0 shortly after…

Wow. What a start. Firmino putting in a perfect performance so far.

Firmino has been unplayable so far.

It's a #CL football lesson this ??

Absolutely sensational football. What a team we are in Europe.

That ball by Gini ?

This feels like Liverpool's performance against Arsenal in 2014. Absolutely rampant.

“That’s football,” screamed Klopp to the Main Stand after that third.

Hoffenheim substitute Uth grabbed one back…

Lovren is a massive idiot.

But Firmino restored the four-goal cushion after the break…

Exceptional by Henderson there.

“Warm up the fax machine…it’s gonna be a busy few days!”

Don't know wether to laugh or cry!!!always going to be goals!!

“Another Lovren f**k up. Nowhere near challenging for that.

I love it when we stand and watch a striker score.

And Reds were jubilant as the final whistle sealed their Champions League place!

3 – Liverpool have returned to the Champions League group stages for the first time since the 2014-15 campaign. Mighty. pic.twitter.com/BR4VJhj0Xt

“Champions league nights are back at Anfield and our Reds put in an inspired performance to welcome it back.”

– Professional Grass on the forums.

That's it. 4-2 and #LFC are back in the Champions League proper. Job done.

Job done, the first 25 mins we were fantastic. Firmino incredible, Mane too & Moreno more than justified his selection. #LFC

“Proper European Football is back to the greatest place in world football!”

Brilliant performance from Liverpool, back in the big one again and looking ready to compete in it. #LFC

Yup. Feelings. Get in @LFC pic.twitter.com/X6u8QZ97EA

Up the Champions League Reds ?? pic.twitter.com/SbMU4QYbuk

“Tell Virgil we’re coming to get him!”

If you are at the draw tomorrow @PeterMooreLFC can you let Barca know @Phil_Coutinho will be playing CL football for #LFC so get lost!

Get the fuck in you mighty Red bastards

Congrats to @LFC back to the @ChampionsLeague .Tomorrow big day for the Red Family#YNWA

Let us know your thoughts on the season ahead in the comments section!