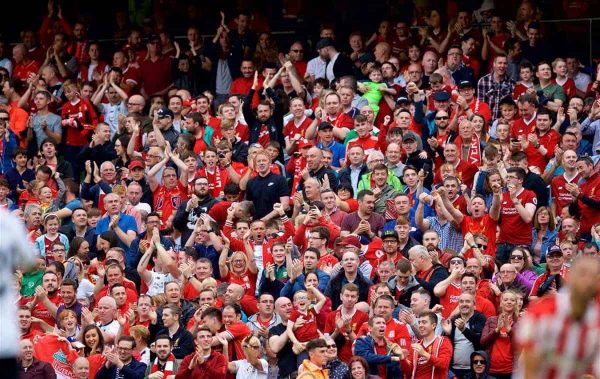 Before Liverpool’s 3-1 victory over Athletic Bilbao on Saturday, the Aviva Stadium served up a stirring rendition of You’ll Never Walk Alone.

The Reds capped their pre-season with a comfortable win over their Spanish opposition, with Roberto Firmino, Ben Woodburn and Dominic Solanke all finding the back of the net.

Trips to Hong Kong, Berlin and Munich this summer highlighted the passion of Liverpool’s supporters around the globe.

But closer to home, their backing is just as impressive, as an excellent You’ll Never Walk Alone before kickoff at Dublin’s Aviva Stadium on Saturday evening proved.

It clearly made a mark on Jurgen Klopp, who told reporters after the victory that he “was really touched by the atmosphere.”

“When we came to the stadium, when we drove through the city, when we arrived at the hotel already, that was really, really special today,” he said.

“I heard about it, that Dublin is quite an LFC city but now I know it and it’s completely different to feel it.

“I thought it makes absolute sense that we try to give a little bit back [after the game].

“When we left the hotel today for the game there were 500 people minimum, but if you give one autograph then it disappoints the 499 because we don’t have time, so that’s difficult.

“Today we tried to spread it a little bit. Hopefully we can make a lot of these fans happy, because they made us happy.

“So really, thank you Dublin, that was a really special experience.”