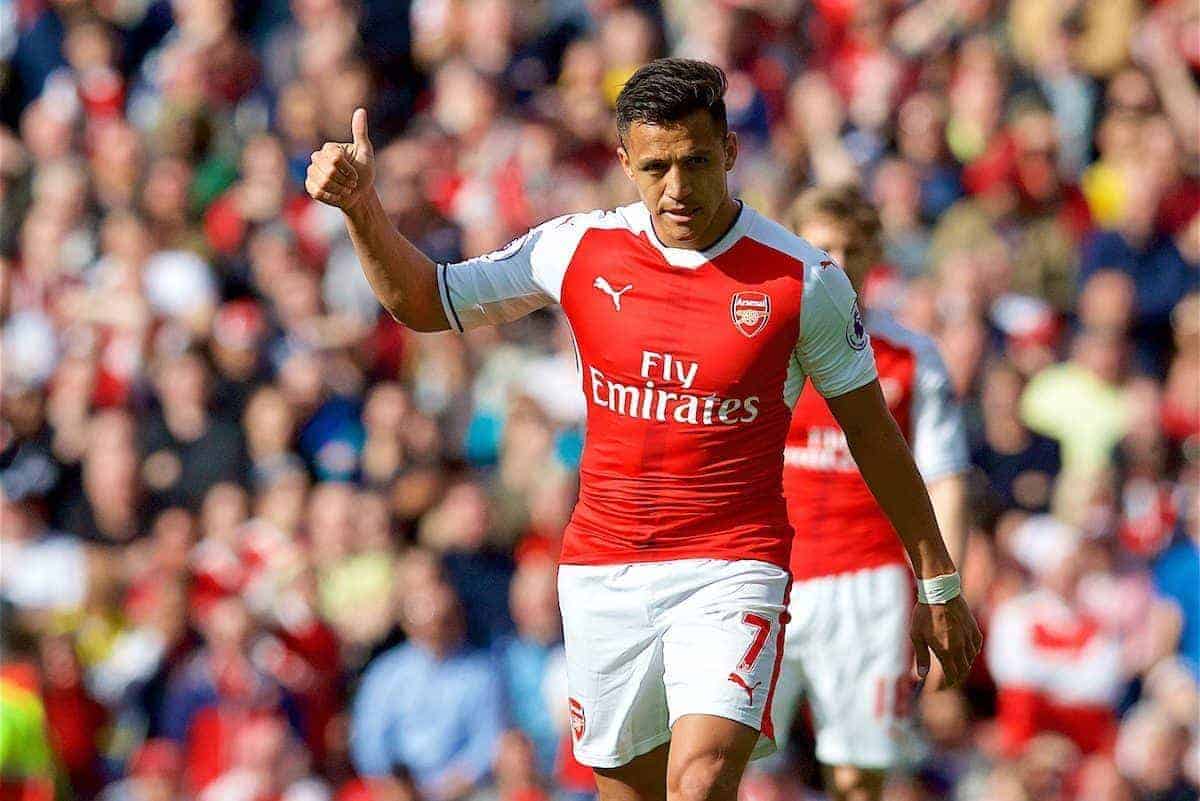 Liverpool will not pay special attention to “world-class” talent Alexis Sanchez if he makes his Arsenal return at Anfield, Jurgen Klopp has said.

Gunners manager Arsene Wenger has confirmed forward Sanchez is available to him for the first time this season having recovered from illness and an abdominal injury.

Klopp believes devising a specific plan to nullify the Chilean, who scored 24 Premier League goals last term, is futile given the way he roams around the pitch.

And he is also mindful of focussing on Sanchez at the expense of other offensive talent at Wenger’s disposal.

“The difficulty with Alexis Sanchez is that he’s pretty much involved in each situation, he’s not fixed on one position,” Klopp said.

“Wherever he is, he’s very dominant—if he comes deep, in space, wing, centre – that’s a world-class player. Obviously he’s able to do this.

“That makes it difficult [but] we don’t have to think too much about it. We defend in space and not follow him all over the pitch.

“We need to avoid the passes, that’s how it always was when we played against him. All the [previous] good results [against Arsenal] were with Alexis Sanchez.

“If you concentrate too much on him then Mesut Ozil will show up, [Olivier] Giroud, [Alexandre] Lacazette, [Theo] Walcott, [Danny] Welbeck.

“We don’t have to think too much about the quality of them. We have the tactical tools to make it more difficult, that’s the first job.”

Sanchez’s future remains uncertain with links to Manchester City not going away, but at least the Arsenal boss’ status is settled after he penned a new two-year deal in May.

That came at the end of a campaign where they failed to secure Champions League qualification for the first time in 20 years as Klopp’s Liverpool pipped them to fourth.

At that point it was not known whether Wenger would stay on but Klopp is delighted that he did so and can pit his wits against him at Anfield once more this weekend.

“Obviously Arsene loves what he is doing,” the German noted.

“Obviously he has all the energy he thinks he needs to do it, that’s the only person who can judge this. The board at Arsenal think the same so they extended the contract.

“It was a hard season after, I think, this long, unbelievable successful time being always involved in the Champions League, being always close to winning things.

“You can get the feeling that a few people don’t want you there any more. I don’t understand it but I’m not in this situation.

“I really respect him a lot and all the things he did in the past for Arsenal but also for football in general.

“He’s a big, big, big manager in the history of the Premier League and he has the power still. That’s all you need. I’m happy that he’s still there and that we meet again on Sunday.”