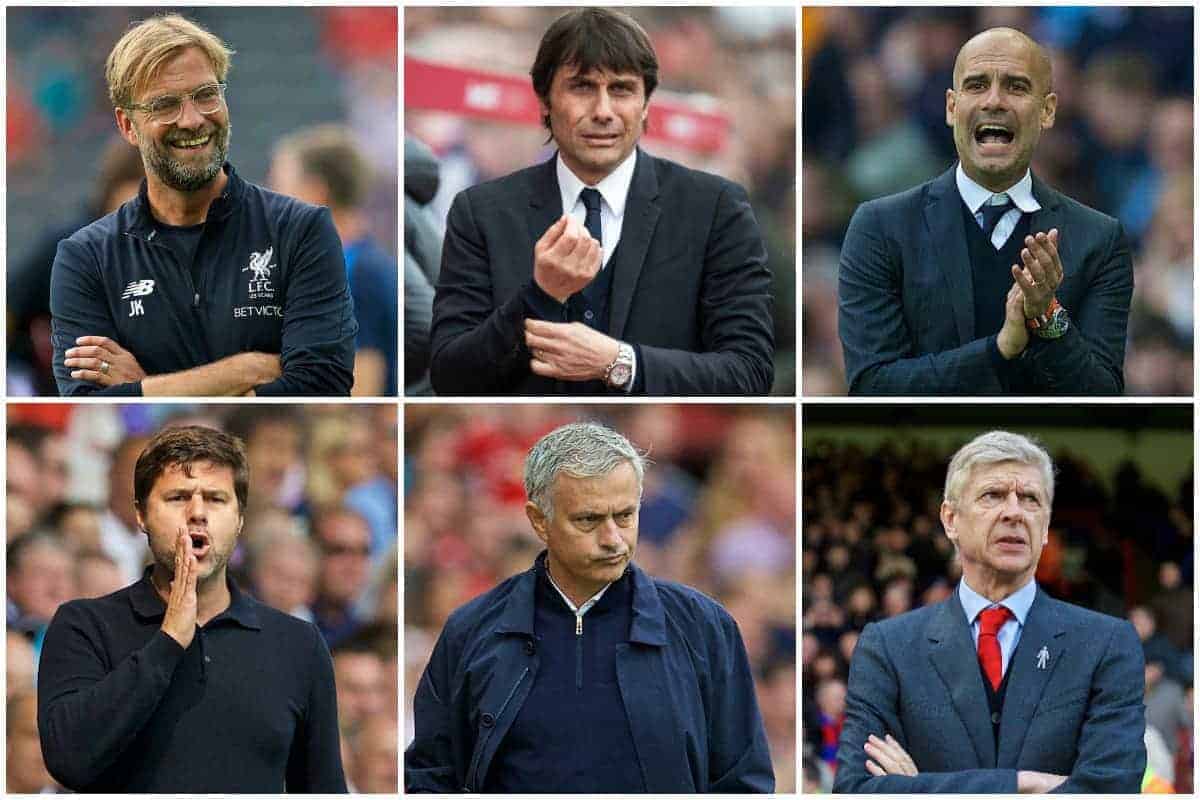 Another fascinating round of Premier League action awaits us this weekend, with Sunday offering up a couple of crackers that could aid Liverpool.

The Reds need to bounce back this weekend when they host Burnley, having also drawn with Sevilla in midweek, with Sean Dyche’s side sure to be a tough opponent.

Arsenal and Chelsea saw off Bournemouth and Leicester City, respectively, and there were also wins for newly promoted pair Brighton & Hove Albion and Newcastle United.

There are 10 more matches to look forward to over the next three days—here’s the best of the action.

Another Test For Arsenal at Stamford Bridge

Arsenal‘s shocking performance at Anfield is still fresh in the memory, and another big test of their character is on the horizon as they visit Chelsea on Sunday.

The Gunners may have won comfortably at home to Bournemouth last weekend, but these are the games Arsene Wenger continues to fall short in.

Huge improvements are needed if they are to get anything from their trip to Stamford Bridge—another resounding defeat will make for almost unrivalled negativity.

Chelsea have recovered impressively after defeat to Burnley on the opening weekend, winning three league games on the bounce and looking like reigning champions again.

On paper, you would expect the hosts to have too much for their unpredictable opponents, but you feel Arsenal have to pick up a win away to a rival sooner or later.

Could this be the one?

The ‘Win-Win Derby’ For Liverpool Fans Twice a season, Liverpool supporters can sit back and watch Man United face Everton and be content whatever the outcome.

It is guaranteed that at least one will drop points, and should it be a draw, the Reds stand a chance of making ground on both.

Comprehensive defeats to Chelsea and Tottenham were preceded by a draw at Man City with a man extra for much of the game, and doubts are creeping in about Ronald Koeman.

United, meanwhile slipped up for the first time this season at Stoke, with their first tricky game of note seeing them fall short.

Jose Mourinho’s side should have too much for Everton on Sunday, but if the visitors could snatch a point, that would be just perfect.

Man City may have had it easy against 10-man Liverpool, but they still showed exactly why they are the bookies’ favourites to win the title this season.

The attacking talent they have is frightening, from the world-class creativity of Kevin de Bruyne and David Silva to the ruthlessness of Sergio Aguero and Gabriel Jesus.

This weekend sees Pep Guardiola and his players visit a reinvigorated, unbeaten Watford side under Marco Silva, so they won’t have it all their own way.

That said, their superiority should shine through at Vicarage Road, assuming they don’t defend like the Reds did there last month.

City’s rivals will be willing Watford on—if they could get in front and frustrate the visitors, you never know.

How Will Hodgson Fare in Return to Management? Roy Hodgson has been a figure of ridicule for years now, following abysmal reigns as manager of Liverpool and England.

Somehow, though, he still manages to find himself work, with Crystal Palace his latest job, following the unjust sacking of De Boer.

It is one of the least inspiring appointments imaginable, but if you can say one thing about Hodgson, it is that he knows how to avoid relegation.

Chances are he will beat the drop—not exactly an earth-shattering achievement, given some of the quality in Palace’s ranks—but the Eagles could have targeted someone so much better.

First up for him is the visit of Southampton on Saturday lunchtime in front of the Sky cameras—don’t expect a classic.