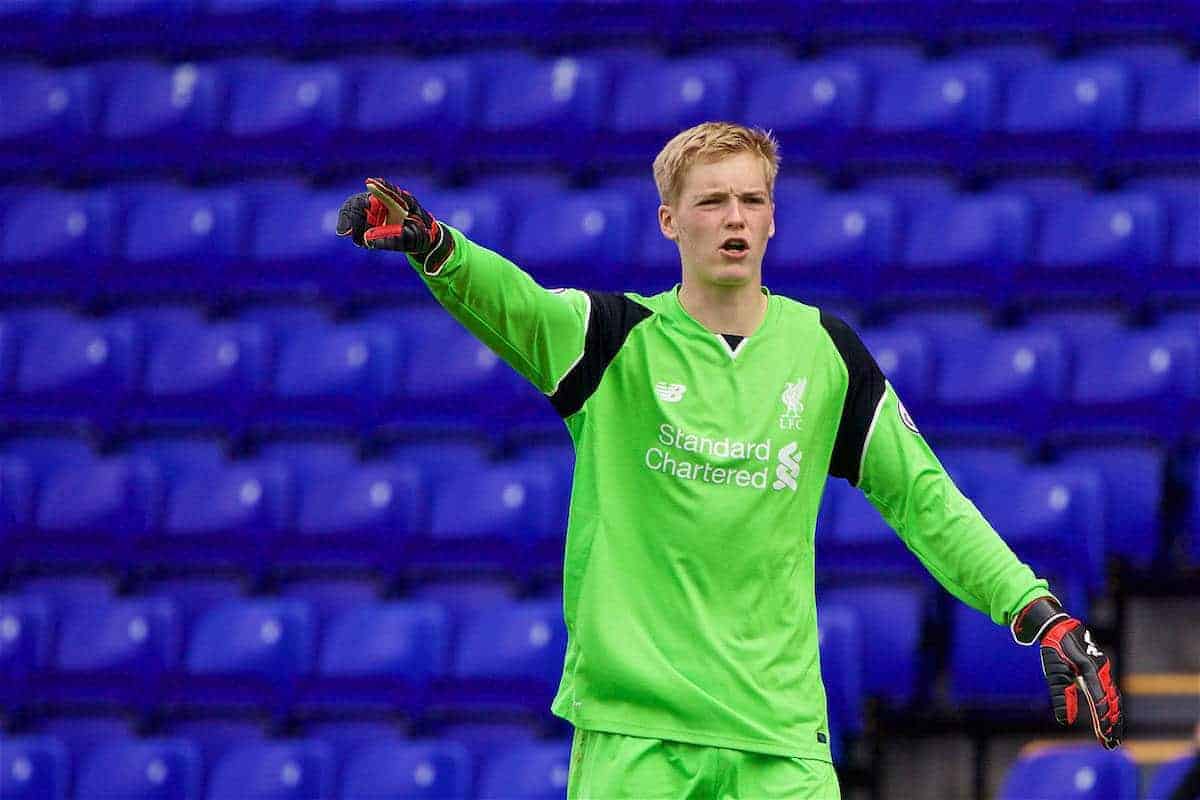 We continue our Liverpool FC academy profiles with Caoimhin Kelleher, the Irish goalkeeper already accustomed to life under Jurgen Klopp at Melwood.

While Klopp’s first-team options between the sticks have flattered to deceive in recent seasons, with both Simon Mignolet and Loris Karius struggling, the Reds have made great strides at youth level.

Neil Critchley and Steven Gerrard are able to call upon a hugely promising crop of stoppers for both the U23s and U18s, while Shamal George is currently developing on loan at Carlisle United.

This comes as the result of a recruitment drive that began with Kelleher’s arrival from Ringmahon Rangers in 2015.

After catching the eye of senior goalkeeper coach John Achterberg and his U23s and U18s equivalents Mark Morris and Neil Edwards, Kelleher signed a four-year deal at the end of 2014/15.

Joining up with the Reds that summer, Kelleher was still celebrating Cork Youth Leagues U17 Premier League success with Ringmahon, his local side.

His brother Fiacre had already left Cork to join Celtic, but Kelleher followed another young Irishman—Conor Masterson—to Merseyside, after the centre-back had joined Liverpool in 2014. A tall but agile shot-stopper, Kelleher is a goalkeeper with a strong understanding of space and a dominant command of his goal-line.

One of the key features of his game is his intelligent positioning, while he has shown bravery in claiming high balls and superb reflexes.

Kelleher is an authoritative presence in the penalty area, booming instructions towards his team-mates, with a leadership belying his young years.

He was given his first opportunity to shine in a friendly in his home city, replacing Owen Wheeler as a second-half substitute in the Liverpool U18s’ 2-0 win at Cork City.

His first start came in the following 1-0 loss to Galway United, but Kelleher was frustratingly sidelined on the competitive stage for the first three months of the campaign.

But after being granted international clearance, he made his debut in the U18s’ 1-1 draw with Middlesbrough, six months after making the move to Merseyside.

He spent the rest of the 2015/16 campaign deputising for George as Critchley’s starting goalkeeper, but came to the fore with five consecutive starts at the end of the season. Kelleher made the step up to the U23s last season, and his progress through the ranks has been reflected in his growth in stature.

While the Irishman arrived as a relatively slender goalkeeper, Kelleher has grown with age, and is starting to fill out his 6’3″ frame, priming him for the role of first choice at U23 level.

Last term served as a breakthrough campaign for Kelleher, who trained regularly under Klopp at Melwood, as well as providing the German with a third goalkeeper on matchdays.

He was even part of the Reds’ squad for the 4-0 pre-season defeat away to Mainz, providing cover for Alex Manninger.

But an infected bug bite, leaving him on crutches, curtailed the youngster’s progress, with Polish ‘keeper Kamil Grabara, who joined at the start of 2016, taking over for Critchley’s side.

The pair have been alternating since, but Grabara’s exceptional displays have seen him overtake Kelleher for both Critchley in Premier League 2 and, now, for Gerrard’s U19s in the UEFA Youth League. This serves as a reality check for Kelleher, who moved to Liverpool from a small club in Cork and has faced little competition when representing Ireland’s U17s and U19s.

Gerrard has typically opted for another goalkeeper, local lad Dan Atherton, for the U18 Premier League, and Grabara’s consistency has limited opportunities elsewhere.

Life as a top-level goalkeeper will now be dawning on Kelleher, who has gone from a big fish in a small pond to one vying for attention at a big club in Liverpool.

But Kelleher is certainly not doomed to fail, with the teenager name-checked by Klopp when rejecting claims he was pursuing a deal to sign Joe Hart back in April.

“We have the young ones, they make big steps, really big steps, Caoimhin [Kelleher] and Kamil [Grabara], that’s really good,” he told reporters.

Kelleher is clearly in Klopp’s plans, and Gerrard is far from ignoring the stopper, but Grabara’s performances—a near fully-formed goalkeeper at just 18—provide a warning.

He will need to take his chances when afforded them, and continue impressing Klopp at Melwood.

If neither Mignolet or Karius are long-term options on the first-team stage, there could well be an opening in the future—and Kelleher will be desperate to fill it.