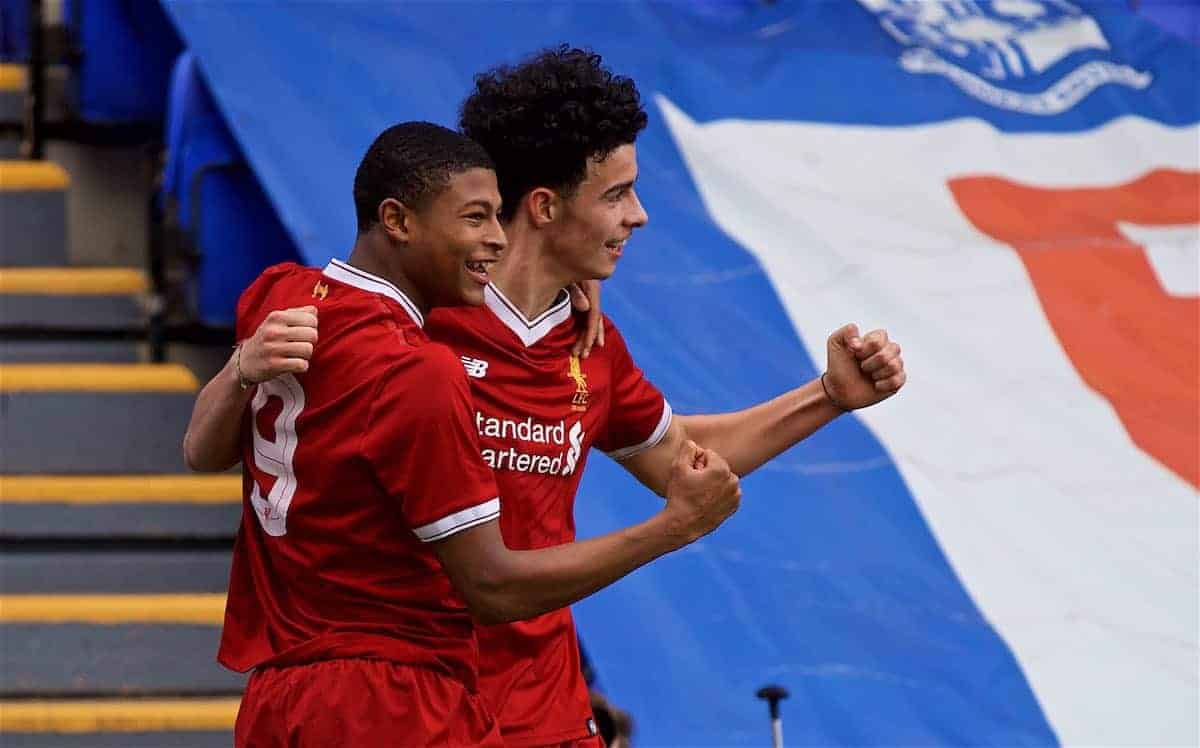 Steven Gerrard’s Liverpool Under-19s had already qualified for the next round of the UEFA Youth League, but rounded off the group stage with a win against Spartak Moscow on Wednesday.

Liverpool’s only defeat in this competition came in Moscow at the hands of Spartak at the start of the campaign, but they were able to exact revenge in Birkenhead.

Goals from Curtis Jones and George Johnston gave the side a first half lead to defend as the visitors came back in the second period.

Liverpool set their stall out early on as captain Ben Woodburn tested Aleksandr Maksimenko with a long range effort which the goalkeeper tipped over the bar.

Rafael Camacho was next to trouble the Spartak goalie but his shot was easily saved, but when Jones danced through on the left, playing a one-two with Conor Masterson, he gave the ‘keeper no chance with his unstoppable near post finish.

U19s manager Steven Gerrard had his side set up in a 3-4-3 formation, and the use of three centre backs made them a threat at set pieces. Johnston headed straight at Maksimenko shortly after the opening goal, but made no mistake with a second effort, volleying in left-footed later in the half from a Jones corner.

Rhian Brewster looked lively up front, and brought a long, lofted pass under his control brilliantly in the first half, but his subsequent shot was saved.

Spartak Moscow fans provided a taster of what they might bring to Anfield for the main event. The smattering of Russian supporters were vocal throughout having made the trip across the Mersey to cheer their young players on.

Maksim Kalachevskii and Kirill Orekhov looked tidy in midfield, but on the whole the visitors struggled to get anything going with Orekhov’s tame shot easily saved by Kamil Grabara. Camacho continued to cause Spartak problems down their left side, crossing dangerously and also getting the occasional shot away.

Bobby Adekanye regularly joined in, and this continued into the second half as the winger surged down the right, into the box, but saw his shot blocked. The Nigerian regularly had the beating of his marker, and got in behind once again, but his pull back to Brewster was skewed wide by the striker from six yards out.

Spartak managed to get something going when Aleksandr Rudenko linked up with Soltmurad Bakaev, but the former was thwarted by an excellent save from Grabara. The Pole had to save well again later in the half as Rudenko found himself free down the left, but the Liverpool stopper made himself big and saved well with feet.

The Muscovites were coming into the game, so Gerrard tried to reassert control of the midfield by introducing Edvard Tagseth. Elijah Dixon-Bonner then came on for Adekanye, with Camacho moving into right midfield as the shape changed to 5-4-1 when defending.

Kalachevski saw a shot blocked as Spartak continued to push forward, but the young Liverpool seemed happy to test their mettle and try to absorb the pressure.

They were able to do so with a combination of last ditch defending and solid goalkeeping from Grabara, and almost added a third in injury time, but Woodburn’s shot was saved and Camacho blazed the rebound over.

Five wins from six games in the group stages, Gerrard’s young side will take some stopping in this competition.