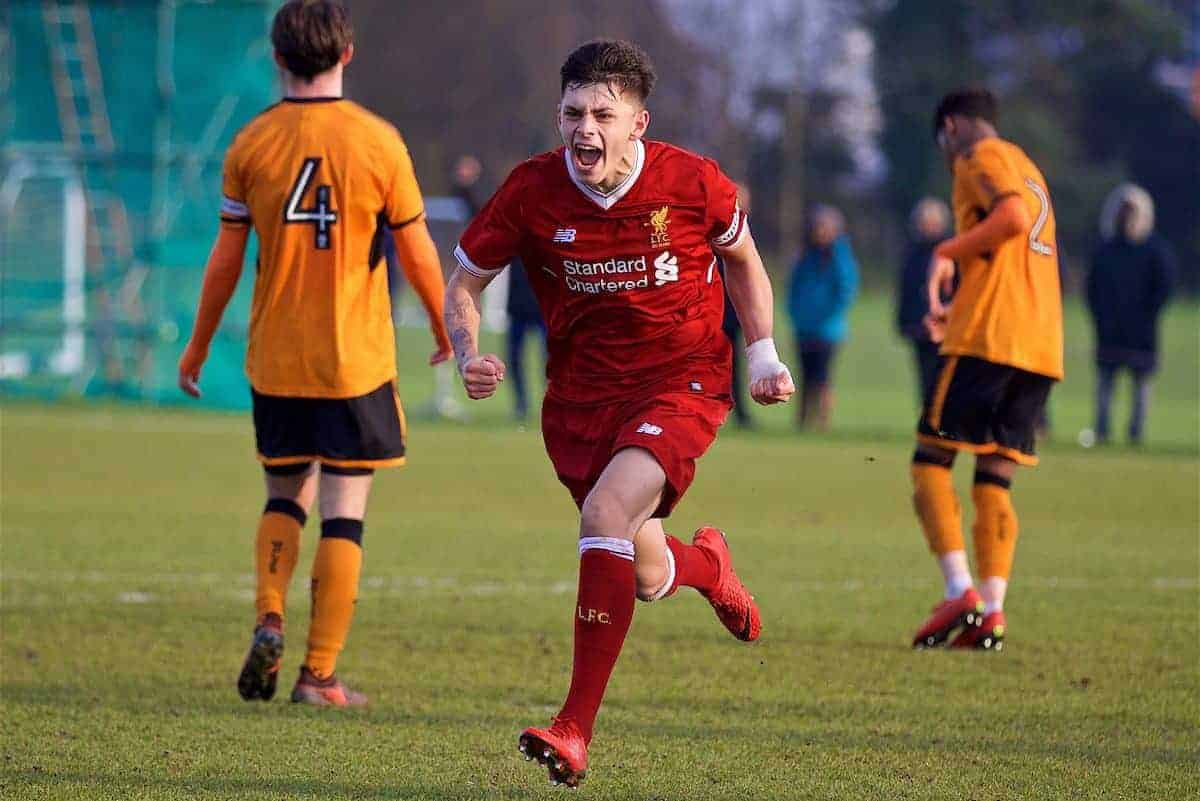 A last-gasp strike from Liverpool U18s captain Adam Lewis sealed a 2-1 victory away to Wolves as Steven Gerrard’s side rounded off 2017 in style.

The young Reds headed to Wolverhampton knowing three points would see them leapfrog Man City to top spot in the North Group in the U18 Premier League.

Gerrard named a talent starting lineup to take on a Wolves side languishing towards the bottom of the table, retaining his new-look 3-4-3 formation.

Impressive newcomer Viteslav Jaros kept his place in goal, behind a back three of Tom Clayton, Rhys Williams and Morgan Boyes, while Lewis and Yasser Larouci operated at wing-back.

On a cold day in Compton, the U18s started on top, and Camacho came close to breaking the deadlock in the opening stages, but Wolves goalkeeper Jackson Smith tipped his curling effort onto the post.

Wolves posed a threat throughout the first half, while the energetic Jones served as the young Reds’ main outlet, dancing through the host’s defensive line at will.

Despite good chances at both ends, the two sides went into the break with the scores level. After Dixon-Bonner’s effort was thwarted by Smith’s inspired stop, Camacho thought he had put the U18s ahead from Lewis’ cross, but was left frustrated as his strike was ruled out for offside.

Lewis provided a constant threat down the left flank in the second half, with the stand-in captain growing into his new role, and he almost laid on an opener for Millar on 66 minutes.

It was Wolves who struck first, however, with Dan McKenna capitalising on an error from Liverpool substitute Luis Longstaff to drive beyond Jaros from the edge of the area.

This set up a tense finale in which the young Reds struck twice, with another substitute, Glen McAuley, netting the equaliser on 84 minutes from Jones’ cross.

And with full-time fast approaching, it fell to Lewis to secure the victory, with the 18-year-old Scouser putting the finishing touch on a mazy solo run from Millar with two minutes to spare.

Gerrard’s side are unbeaten in competitive games this season, and can head into 2018 buoyed by their bright start to the campaign, with a visit to Blackburn Rovers to come in the new year.