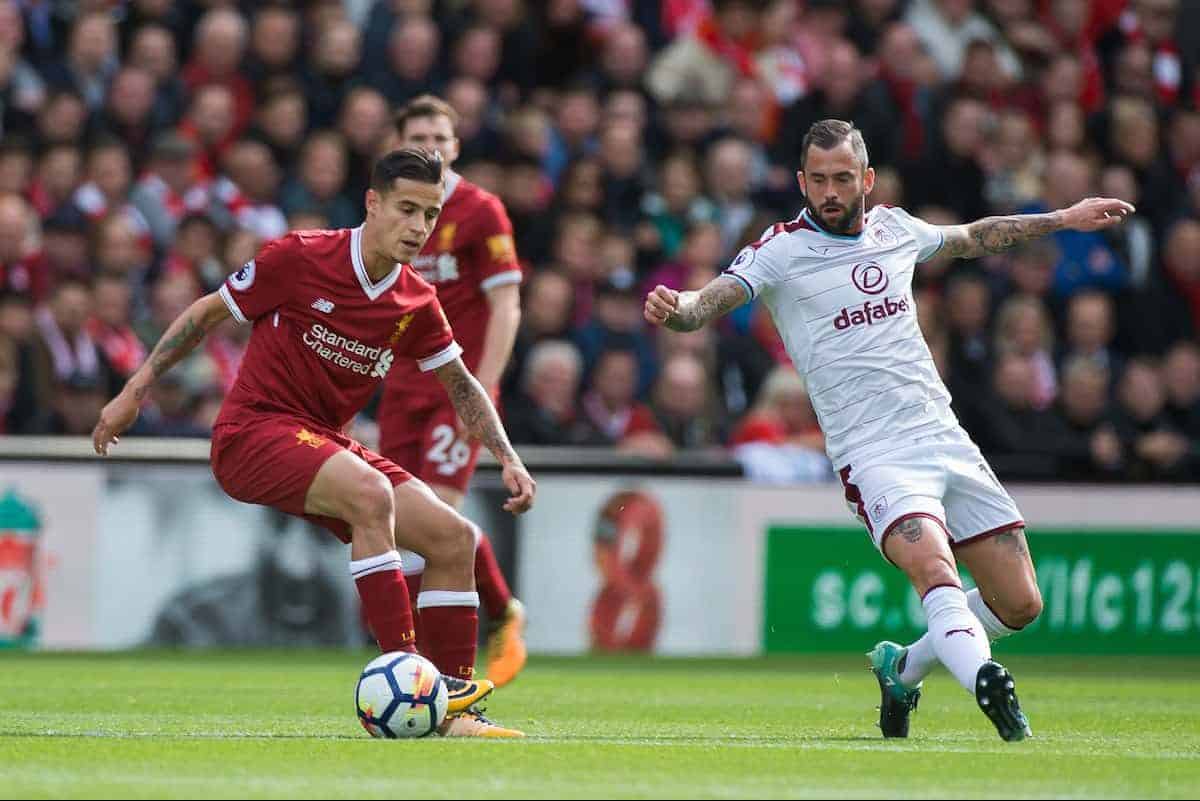 Liverpool make the potentially tough trip to Burnley in the Premier League on New Year’s Day, with Jurgen Klopp‘s side now unbeaten in 15 matches.

Saturday saw the Reds record one of their most significant victories of the season to date—an entertaining 2-1 win over Leicester City at Anfield.

Liverpool came from behind to beat a good Foxes side, with Mohamed Salah‘s ruthless double making it a remarkable 23 goals this season for the Egyptian.

Just 48 hours after kicking off that game, Klopp’s men are back in action with an equally tricky test on the horizon.

Burnley have enjoyed a fantastic campaign, silencing the doubters by the week and currently sitting seventh in the Premier League.

Defensively, Sean Dyche’s side have been superb, conceding just 17 times in 21 league games, and the manager’s ability to get every ounce out of a limited squad is commendable.

Monday’s trip to Turf Moor will be a real test of this Reds squad, with rotation essential and their opponents an awkward side to get the better of.

The Clarets proved that at Anfield back in September, when they managed a 1-1 draw.

This is one of those matches where the result takes precedence far more than the level of performance—it could be a gritty affair, given the amount of football played recently—and three points for Liverpool would be very significant.

They have lost just once in their last 21 outings—long may that impressive run continue into 2018.

Klopp has been dealt a blow with concern over Salah’s fitness, with the winger limping off after his match-winning display against Leicester.

There was always a chance that the 25-year-old would be rested anyway, having started all eight matches in December.

Nathaniel Clyne, Alberto Moreno, Jordan Henderson and Daniel Sturridge are still out, with their respective returns still seemingly a way off.

Simon Mignolet could return in goal in place of Loris Karius, and Trent Alexander-Arnold is likely to come in for Joe Gomez at right-back.

Joel Matip and Dejan Lovren may retain their places at centre-back, although Ragnar Klavan could return, having played well of late.

Andrew Robertson might make way for James Milner at left-back, freeing up room for Gini Wijnaldum to start in midfield.

Adam Lallana, Alex Oxlade-Chamberlain and Dominic Solanke will also be eyeing up starring roles, with Lallana still searching for his first start of the season.

Tom Heaton, Dean Marney and Jon Walters are all out for Burnley, but Dyche’s biggest dilemma will be rotating a relatively small squad.

Will his first-choice starting lineup have enough in the tank following Saturday’s 0-0 draw at Huddersfield Town?

Last 5 at Burnley (All Competitions)

Away fans’ pubs: “The Cricket Club; the club house at the cricket club welcomes home and away fans (including colours) and is handy for where you park,” Burnley supporter Natalie Bromley told us.

One piece of advice for visiting fans: Wear something comfortable—your seats are still wooden!

Liverpool’s only league defeat to Burnley since 1974 came at Turf Moor last season, when the Clarets deservedly ran out 2-0 winners.

The two sides have met 10 times in the league in that time.

Speaking after Saturday’s 2-1 win over Leicester, Klopp praised the job Dyche is overseeing at Burnley, comparing it to his time at Mainz:

“Fantastic. Fantastic. Really outstanding. I know how difficult it is to swim with the big fish, and obviously they swim quite well,” he said.

“It’s just a nice story again, each year creates another story and this year it’s the Burnley story.

“I think my friend Dave [Wagner] said, it compares to what Pep is doing at City: an outstanding season and Sean Dyche is doing exactly the same under completely different circumstances.” As was the case against Leicester, the match is not being shown live on UK television, so following our matchday live blog is the next best thing if you’re not at the game.

Chris Williams is in charge of talking you through the action, with our coverage starting at 2.15pm (GMT). Kickoff is at 3pm.