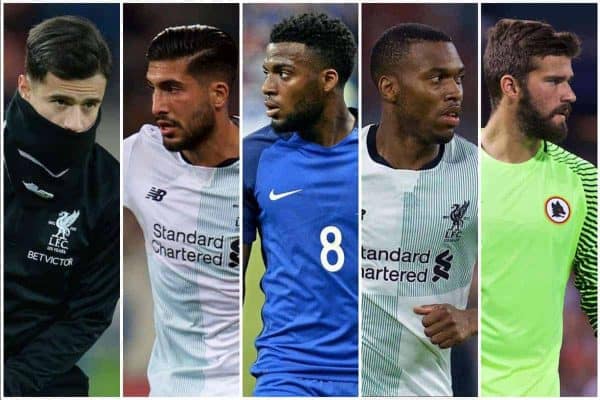 We round up the latest Liverpool transfer news and rumours on day three of the January window, with speculation over both ins and outs.

Tuesday brought considerable developments in Philippe Coutinho‘s push for a winter move to Barcelona, with the Catalan giants reviving their interest in the Brazilian.

Elsewhere, the Reds were given a boost in their hopes of signing Schalke’s in-demand midfielder Leon Goretzka on a free transfer.

The January window only opened on New Year’s Day, but the rumour mill is in full motion, with Merseyside a hub of activity.

Coutinho has been reinstated as the big story of the transfer window, with Barcelona returning with a renewed vigour as the playmaker remains eager to move to Catalonia.

According to Sky Sports’ Spanish football expert Guillem Balague, following up widespread reports on Tuesday, the Liga leaders are planning a new bid worth €150 million (£130 million).

“Liverpool have changed their tone but have not put [a] price [on] him,” he wrote on Twitter. “They will act when [the] offer arrives. Which it will.”

This would ensure Coutinho as the world’s third-most expensive player, behind compatriot Neymar and his fellow Paris Saint-Germain forward Kylian Mbappe.

However, BBC Sport report that “Liverpool are yet to receive a new bid from Barcelona.”

Can Set For ‘Further Talks’ Over Reds Deal

While Coutinho’s switch to the Nou Camp seems inevitable, the Reds seemingly still have hope of convincing Emre Can to stay on Merseyside.

The German midfielder is in the final six months of his contract, with Juventus and Borussia Dortmund among the clubs pursuing his signature.

However, Sky Germany report that Can won’t be making the move to join the former this month, as he is set to remain with Liverpool for the rest of the season.

And encouragingly they add that “there will also be further talks with Liverpool about a contract extension.”

Could Can, who has made 25 appearances in a successful season so far under Klopp, agree new terms with the Reds?

Prodigious academy midfielder Ben Woodburn has struggled for game time on the senior stage this season, with his appearance in the matchday squad at Burnley on Monday his first since October 28.

The 18-year-old signed a new five-year contract with the Reds days before that afternoon on the bench at Anfield, and his future clearly remains on Merseyside.

But he is likely to leave Liverpool on a temporary basis this month, with the Northern Echo revealing that he is “expected” to join Sunderland on loan.

“[Chris] Coleman is seeking recruits in a variety of areas particularly in the final third,” they write.

“Liverpool’s Ben Woodburn is still expected to be one of the early arrivals on loan, although that deal has slowed up.”

Given Woodburn’s relationship with former Wales manager Coleman, it could be an ideal move for the youngster.

Dominic Solanke made his 17th senior appearance for Liverpool in the 2-1 win away to Burnley on New Year’s Day, and while a goal still eludes him, he is making great strides.

The 20-year-old has already earned his first England cap, coming off the bench in November’s 0-0 friendly draw with Brazil, with his decision to make the switch to Anfield paying off.

These achievements won’t factor into negotiations over a tribunal fee for Solanke, however, with Chelsea still yet to be paid compensation following his free transfer.

According to ESPN‘s Glenn Price, Liverpool are set to be favoured when the deal goes to tribunal, likely later this year.

“The Professional Football Compensation Committee will set Solanke’s cost based on a number of factors including his playing record, the terms of the contract offered to him, the length of time at his previous club and the interest shown by other teams,” Price reports.

“But those factors are only considered to be relevant at the date of signing, with Solanke going on to have significant career landmarks after his arrival at Liverpool on July 1.”

Solanke’s rise on the first-team stage has coincided with the extended struggles of Daniel Sturridge, with the striker currently sidelined through injury.

Sturridge hasn’t featured for the Reds since the 7-0 win over Spartak Moscow in the Champions League on December 6, and his last appearance in the Premier League came on November 25.

The 28-year-old is attracting loan interest from a host of clubs across the English top flight, most notably Southampton.

And according to Turkish outlet Fanatik, Super Lig side Besiktas are also pursuing a temporary deal for the Englishman, who has scored three and assisted three in 14 games this season.

They claim that “first negotiations [have been] positive,” and a deal would be accelerated if and when Cenk Tosun joins Everton.

Besiktas would pay Liverpool £2.22 million to take Sturridge on loan for six months, with the option to buy potentially at £13.35 million.

With the likelihood of Coutinho leaving Liverpool in January increasing, Klopp will be eager to secure a replacement for his key attacker.

And according to the dubious Duncan Castles of Yahoo Sports, this could come in the form of Thomas Lemar, who has “decided to join from AS Monaco assuming a transfer fee can be agreed with the Ligue 1 club.”

Lemar is believed to be on the Reds’ radar, and would be an ideal candidate to fill in for Coutinho is he does depart.

Elsewhere, Spanish publication Diario Gol suggest Real Madrid outcast Dani Ceballos could be an option to fill in for the No. 10.

His usurper would come in the form of AS Roma’s Alisson, who is enjoying a thriving reputation since joining from Internacional in 2016.

They would face competition from Paris Saint-Germain, however, but given Mignolet’s long-term failure to convince at Anfield, it may be a wise move.

And finally, young Liverpool midfielder Cameron Brannagan‘s time with the club is drawing to a close—according to his father.

Taking to Twitter on Tuesday afternoon, Mark Brannagan insisted the 21-year-old is “available now,” both on a permanent basis or on loan.

He went on to suggest Brannagan would be open to a move to Championship hopefuls Leeds United.