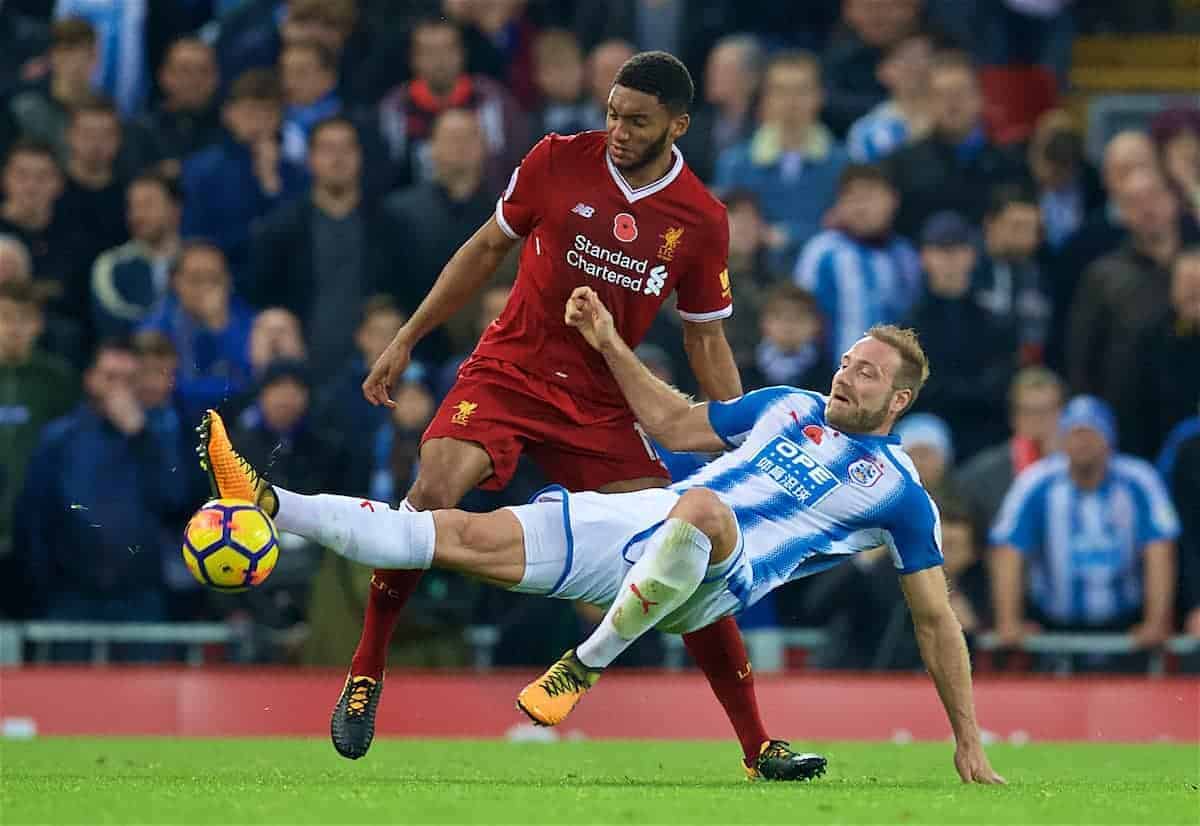 Liverpool visit Huddersfield Town in a crucial Premier League encounter on Tuesday evening, with three points imperative for the Reds.

It has been a demoralising seven days for Jurgen Klopp‘s side, with back-to-back defeats against Swansea City and West Brom.

Saturday’s FA Cup elimination at the hands of the Baggies came from nowhere, and the whole performance was way short of acceptable.

With a lack of January business causing concern, and the Man City win earlier this month now a distant memory, it’s fair to say Liverpool’s season has reached a vital point.

They feel perilously close to falling apart if they don’t regain their composure—something that has to happen on Tuesday.

The Reds make the trip to the John Smith’s Stadium to take on a tricky Huddersfield team, as Klopp and his good friend David Wagner meet for the second time this season.

Liverpool got the better of the Terriers at Anfield back in October, winning 3-0, but this will be a far sterner test for the top-four hopefuls.

The defensive lapses that occurred at the weekend must be eradicated, and Klopp needs to get a far more spirited, energetic showing from his players.

A couple of bad results on the bounce can happen to anyone—let’s not forget Liverpool were unbeaten in 18 matches before that—but a third in a row would definitely make for worrying times.

An impressive victory will steady the ship so much.

There are no new injury problems for Klopp, with Nathaniel Clyne and Adam Lallana still sidelined.

The boss may well be considering making changes to the team that lost to West Brom, though, with so many poor individual displays on show.

Joe Gomez should return in place of Trent Alexander-Arnold, who really struggled at the weekend, and Andrew Robertson deserves to replace Alberto Moreno at left-back.

Jordan Henderson and James Milner both did fairly well when they came on, without being earth-shattering, so two of Emre Can, Gini Wijnaldum and Alex Oxlade-Chamberlain could see themselves relegated to the substitutes’ bench.

The much-famed front-three of Mohamed Salah, Sadio Mane and Roberto Firmino should all start, but there is the risk of over-playing them at the moment.

Danny Ings is an option, having looked lively during recent cameos, and Dominic Solanke is also waiting in the wings.

Elias Kachunga is thought to be Huddersfield’s only injury concern, according to Wagner.

Last 5 vs. Huddersfield (All Competitions) Away fans’ pubs: “The Ropewalk next to the stadium complex welcomes and caters for away fans; along with this, there is The Cherry Tree located close to Huddersfield station,” Terriers fan Nathan Hosker told us.

“The Head of Steam is also another option, which is located directly on platform one at Huddersfield station.”

One piece of advice for visiting fans: “The best entrance for away fans to come to the ground is down Gasworks Street/Stadium Way,” he added.

“This will directly lead you up to the correct side of the stadium an away fan requires to come and watch the match.” Ings and Solanke are both looking for their first goal of the season, in all competitions.

It makes Firmino staying fit feel all the more important.

Speaking at Melwood on Monday, Klopp said a response is now vital, with the season being tackled one game at a time:

“I don’t look ahead four or five weeks and think games are important. Every game is important,” Klopp said.

“But because the view from outside we wasted three points, now people think it is more important.

“It was only two games ago we had an 18-game unbeaten run. Now everything feels different. That’s true. It’s very important.

“We can’t afford anymore bad games, 100%. They were really harsh defeats for us. We have to show what we can do again. We can learn from the defeats. We need to get back on track tomorrow night.”

The match is BT’s game of choice on Tuesday, with coverage getting underway on BT Sport 1 at 7:15pm (GMT). Kick-off is at 8pm.

Chris Williams is in charge of our matchday live blog – keep him company from 7:15pm, as he talks you through the action.