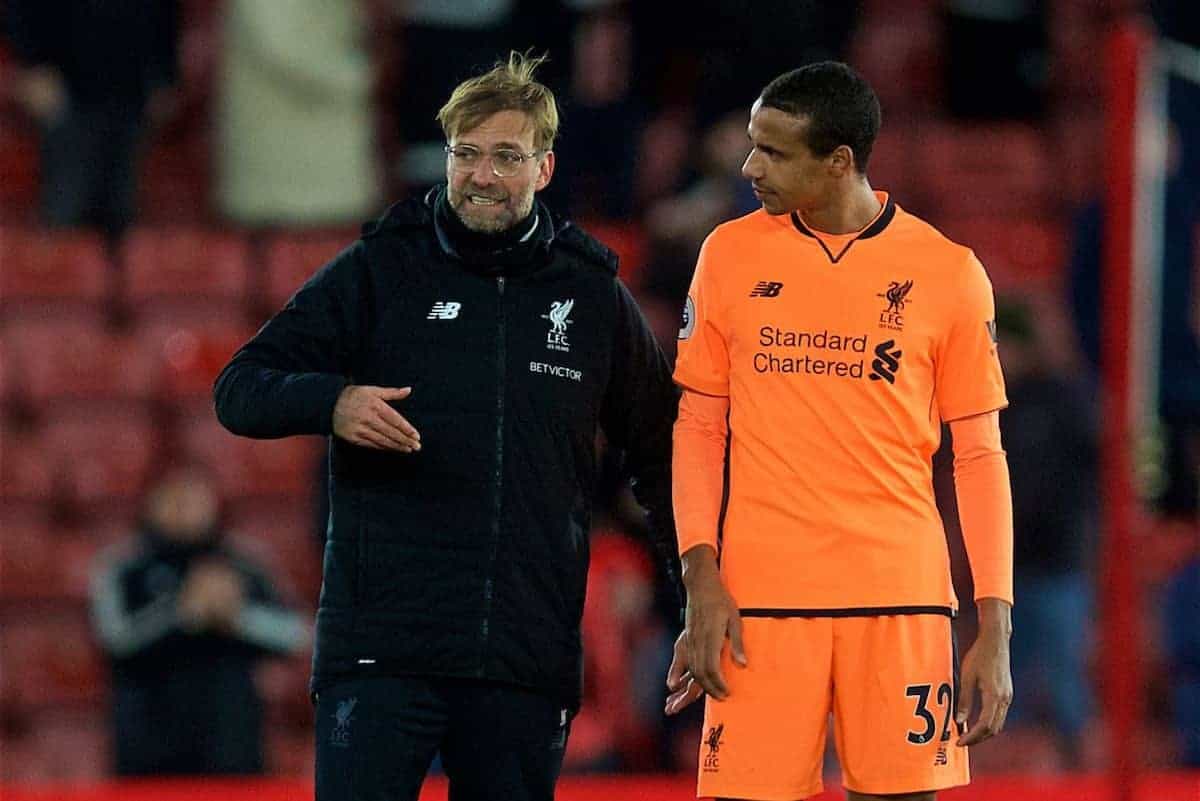 Liverpool travelled to Southampton with tactics which allowed them to prepare for Porto, though not quite in the way Jurgen Klopp may have wanted.

The game began with Roberto Firmino and Mohamed Salah sprinting to close down Southampton from their kick off.

This initial action was an early indicator that this would be Liverpool’s strike pairing in both attack and their counter-pressing defence.

The basic formation wasn’t too different to the Tottenham game and at times it invited the opposition onto them, just as it did against Mauricio Pochettino’s side.

The midfield three struggled to take control of the game and this affected other areas of the pitch, especially the full backs, and the most attacking of the central three, Alex Oxlade-Chamberlain.

As a result Liverpool only had 48 percent possession, which isn’t something you’d expect against side outside of the top six, although Klopp did say in his pre-match press conference that he considered Southampton one of the few football playing teams in the bottom two thirds of the table.

Both teams had the same amount of shots on target, with four, but Liverpool had four big chances to Southampton‘s two, as explained in the expected goals section below. There were some suggestions that Klopp was letting his players sit back and conserve energy, but his comments after the Spurs game suggest that he doesn’t want to lose control of games.

After all, the best way to conserve energy is to keep the ball.

“Our problem in the Tottenham game was that we didn’t play football in the second half,” said Klopp after the 2-2 draw at Anfield last time out.

“That’s the best kind of defending, by the way, keep the ball. We didn’t do that well enough, and that’s what I was not too happy with.”

While he will have looked to preserve fitness ahead of such an important game in midweek, the manager will not have wanted it to be done at such a risk to his back line.

The midfield let him down in this respect, and they often left the full backs in the lurch as they transitioned from defence to attack before giving up possession again.

A reassuringly good Loris Karius came to their rescue.

“In a few situations we were not active enough in our formation, meaning they could play diagonal balls pretty easily,” said Klopp after the game.

“Then on the other side our full backs left them alone in situations, not only after crosses but even before the crosses.

“So we need a goalkeeper: no problem, that’s why he is there and was fantastic in these moments.”

Georginio Wijnaldum was unable to control the game in the all-important role as the second midfielder in the three.

He should have been providing options for Emre Can and Oxlade-Chamberlain, but he wasn’t putting himself in the position to receive the ball.

Can himself should also have a pass accuracy of more than 79 percent in the role he is playing, and also contributed to this lack of control.

Oxlade-Chamberlain suffered as a result and couldn’t get involved, and when he did he often lost the ball. He surrendered possession three times through either unsuccessful touches or being tackled, and his pass accuracy was just 70 percent.

Klopp was, however, pleased with the second half display:

“The second half we controlled the game really, we were much more active in the half spaces and we created fantastic chances, which we didn’t use, but of course after a 2-0 win that’s not a big problem.”

The average position map from WhoScored shows Liverpool’s attacking trident at its most dangerous.

Salah may go down on opposition scout reports as an inverted winger or inside forward on the right, but for much of the game he is Liverpool’s striker, playing off the shoulder of the defender or running unpredictably at the back line.

Firmino drops deep and moves around the pitch the way only he can, transitioning from defence to attack in the blink of an eye and from playmaker to centre-forward even quicker.

The Brazilian’s heat-map, from Squawka, shows his blanket coverage of the opposition half.

Even though Sadio Mane has been out of sorts of late, he is still dangerous enough to disrupt an opposition defence who always have to be wary of his pace, and this provides extra space for his fellow attackers.

Klopp summed this up recently when he said: “Even if Sadio is not at his best, he’s still a threat.”

Once he’s firing on all cylinders he’ll be up there with Salah.

The other notable player on the average position map is Andy Robertson, who is providing good attacking width down the left.

The use of Mane as an inside forward rather than a traditional winger means its important that the full back provides the width.

If Liverpool bolster their midfield ranks to with quality which offers more control in attack and defence, they may be able to release the full back on both sides.

The expected goals timeline (below, from Understat) shows Southampton coming back into the game during that period of the first half where Liverpool lost control.

Pierre-Emile Hojbjerg’s shot on the 17th minute goes down as a ‘big chance’ and sees the sides come almost level on the xG timeline, which shows the importance of Karius’ save.

It was one of those which went straight at the keeper, but the only reason it did was because his positioning was excellent as he rushed out to close the angle. Southampton’s other big chance came in the 58th minute when Wesley Hoedt turned a free kick just wide at the near post.

It might have been a bit harsh to consider it a clear-cut chance considering the power on the cross from James Ward-Prowse, but it was a dangerous situation which Liverpool failed to deal with in their zonal system.

Liverpool had four big chances and the best of these, according to the xG data, fell to Adam Lallana in the 84th minute.

The other big chance which didn’t result in a goal was Salah’s effort on the 70th minute which he put into the side netting.

Beyond the attacking three, the player with the best contribution to creating scoring situations was Trent Alexander-Arnold.

His xGBuildup score of 0.73 — which takes into account build-up play rather than key passes and shots — was the highest in the team.

Even though Trent’s pass success was a lowly 68 percent, he was heavily involved in the game and his 90 touches of the ball was more than any other player on the pitch.

Liverpool now return to the Champions League and will travel to Porto to face a side who haven’t lost a league game all season.

Europe is a different proposition to the Premier League, but Klopp’s side could be better positioned to compete here than they were in the domestic cups should their attacking three continue to produce on the counter-attack.

The manager may tweak his midfield, dropping Wijnaldum back alongside Jordan Henderson who should come into the side for the suspended Can.

This will mean the 4-3-3 could become more of a 4-2-4 with Oxlade-Chamberlain, Lallana, or James Milner supporting the front three.

The midfield could become a flat three, or even a four, if Mane drops back to form a 4-4-2 in defence.

It’s a new tactical test for the club and for the manager, and will be a step up from their similar experience in the Europa League knockout stages during Klopp’s first season at the club, when they reached the final.