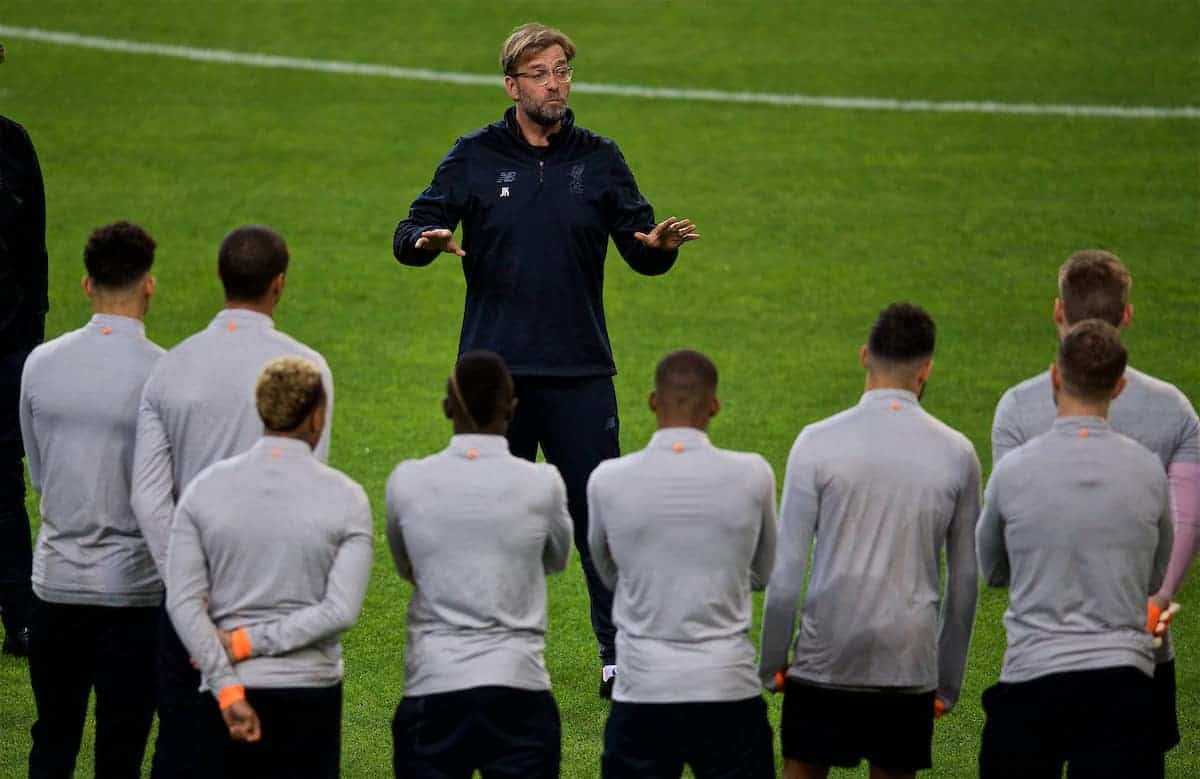 Liverpool head to Porto in the Champions League last 16 on Wednesday night, with a first-leg victory of paramount importance on the road.

Incredibly, it is nine years since Liverpool last had a Champions League knockout clash to look forward to—the eventual quarter-final defeat to Chelsea in 2008/09.

Since then, they have had to put up with two group-stage exits, as well as failing to qualify for the competition in six of the last eight seasons.

There is a feeling that the good times are returning under Jurgen Klopp, however, and they have a good chance of reaching the last eight.

Sunday’s win over Southampton was about as routine as Premier League victories come, as it has helped ensure that Klopp has his players fresh for the trip to Portugal.

Getting that all-important away goal is so crucial on Wednesday, and while victory would clearly be outstanding, a score draw to take back to Anfield would be more than adequate.

Defensive resilience will be required against a talented Porto outfit—the Estadio do Dragao is a tough place to visit—but the Reds’ attacking brilliance can really hurt their opponents.

There is something special about Liverpool in the European Cup—the hope is that this is still just the beginning of a remarkable adventure in it this season. Nathaniel Clyne has returned to full training this week but won’t feature, while both Ragnar Klavan and Joe Gomez could be involved after recovering from injury.

Loris Karius will keep his place in goal, with the German confirmed to start ahead of Simon Mignolet, and he could be guarded by an unchanged defence.

Klopp is forced into at least one midfield alteration, however, with Emre Can suspended and a rested Jordan Henderson poised to step in.

The likes of James Milner, Georginio Wijnaldum, Adam Lallana and Alex Oxlade-Chamberlain will all be vying for starts, and Klopp is likely to stick with Sadio Mane, Mohamed Salah and Roberto Firmino in attack.

Porto are boosted by the return of both Ivan Marcano and Andre Andre, but top goalscorer Vincent Aboubakar is a doubt.

Every Past Meeting with Porto (All Competitions) Porto are definitely not a team to be taken lightly, and their form this season shows exactly why that is the case.

Managed by former Portugal winger Sergio Conceicao, they top the Primeira Liga by two points with a game in hand, with a 28th league title on the cards.

They have conceded just 10 goals in the league all season, and there is undeniable quality lurking throughout their squad.

Portuguese football expert Jan Hagen told This is Anfield how he expects Porto to line up, singling out certain individuals for special praise.

“Coneicao has often opted for a 4-3-3 against better opposition this season, but with main man Danilo Pereira out injured there’s great uncertainty related to how Porto will line up against Liverpool.

“He might stick to the 4-3-3 and go for Andre in midfield instead of Jesus Corona, pushing Moussa Marega out wide, but the Porto manager chose a 4-4-2 in a 1-0 win against great rivals Sporting CP last Wednesday.

“Marega and Vincent Aboubakar, both loaned out last season, have given Porto another attacking dimension this season with their pace and power, though.

“Alongside their Algerian team-mate Yacine Brahimi the trio have been outstanding this campaign, posing most of Porto’s attacking threat, often on counter-attacks.

“Also their full-back duo, Alex Telles and Ricardo Pereira, deserve a mention for the season they are having.

“Both are a big part of their attacking game, especially Telles—nine assists in 20 Liga games this season—and his marvellous left foot.”

Liverpool should underestimate them at their peril. Speaking at the Estadio do Dragao on Tuesday night, Klopp acknowledged the need for an “outstandingly strong” performance in a dream tie:

“On a good day we are really strong, but we need to be outstandingly strong to get a result tomorrow at Porto,” he told reporters on Tuesday.

“It’s quite a job to do, that’s all we are focused on—in a very positive way.

“Last summer we dreamt of this, and now we are here.” The match is part of BT Sport’s Champions League coverage, with BT Sport 2 showing the game from 7pm (GMT). Kickoff is at 7.45pm.

Chris Williams is the man to talk you through the action in Portugal—he will be running our matchday live blog from 7pm.