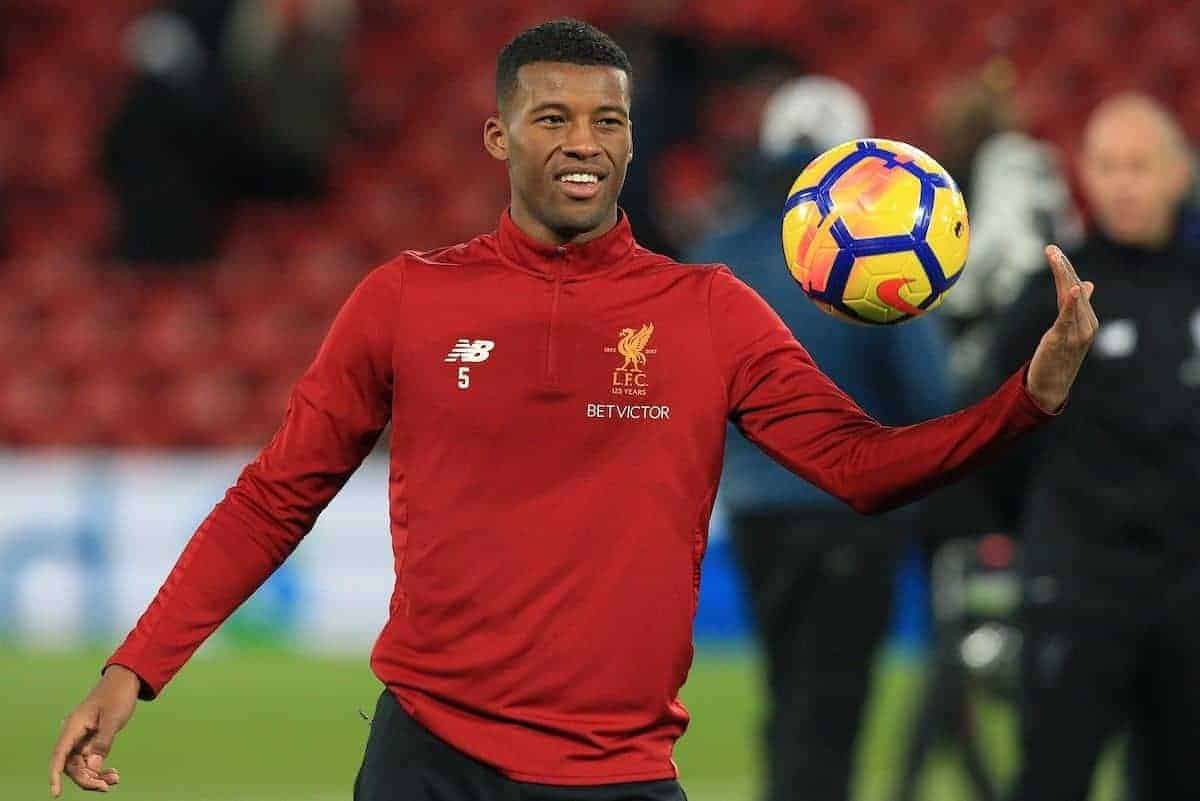 Liverpool midfielder Georginio Wijnaldum has played just 81 minutes of football in the past month, with illness prompting a battle for match fitness.

Wijnaldum was sidelined in the last week of February, missing the Premier League victories over West Ham and former club Newcastle, as well as the Champions League last-16 decider against Porto.

He returned to the fold for a 10-minute cameo in the Reds’ 2-1 defeat to Man United at Old Trafford, before making his first start since Valentine’s Day at home to Watford.

Speaking after that 5-0 win, Jurgen Klopp explained how “Gini was [tired] after 60 minutes,” with both he and Ben Woodburn struck with illness for a lengthy period.

The 27-year-old has linked up with the Netherlands squad for this month’s clashes with England and Portugal, however, along with Virgil van Dijk.

And speaking to Dutch publication De Telegraaf while on international duty, Wijnaldum revealed how he was “hit by a violent infection, which caused me to lose weight.”

Wijnaldum detailed the club doctor’s evasive action in keeping him away from Melwood, in fear that he would “infect other players.”

“It lasted for two weeks,” he said, adding how prescribed antibiotics “made me sicker,” and after making his recovery he has been forced to play catch-up.

“I had to work on my fitness again. I have trained hard, but on Saturday I noticed that I need rhythm for the way I want to play,” he recalled.

“It’s going better, but I’m not as fit as before I got sick.” This is a blow for Wijnaldum, with James Milner stepping up to produce a stellar performance in the 4-1 triumph over West Ham in his absence.

With Emre Can, Jordan Henderson and Alex Oxlade-Chamberlain also impressing of late, and Adam Lallana working his way back to full fitness, Wijnaldum’s setback comes at an untimely juncture.

His situation is similar to that of Ragnar Klavan, with the centre-back telling Estonian outlet Soccernet how he “lost six-and-a-half pounds” due to a virus in January, before suffering a hamstring injury.

“The timing of the injury was a bit bad—I don’t get injured very often, but I got exactly when the world’s most expensive midfielder is brought in,” he said.

“I gave up my position on a plate. Unfortunately, you can not choose how and when you get injured. After that, I knew that it would be difficult to win my position back.”

But with Liverpool still fighting for a top-four finish in the league and with a Champions League quarter-final against Man City to come, Klopp will still depend on his squad depth to compete.