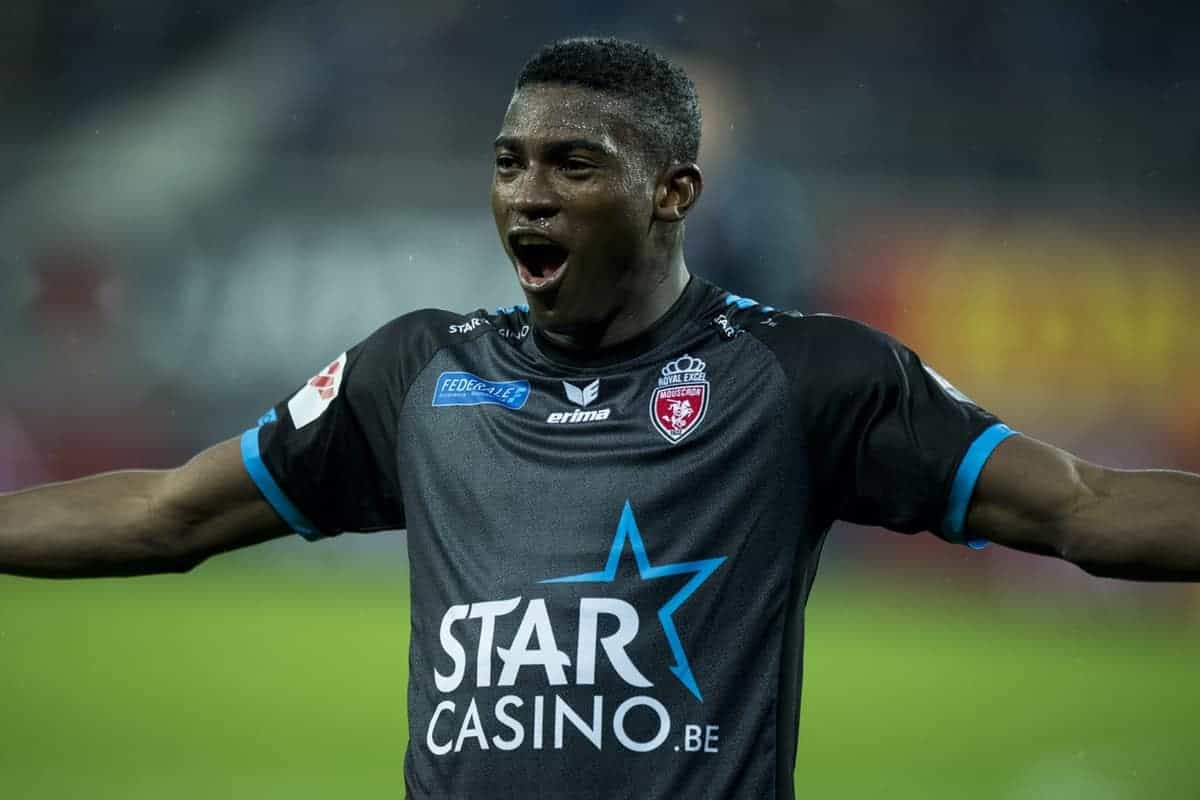 Liverpool currently have 17 players out on loan, but where the likes of Divock Origi and Ryan Kent are struggling, Taiwo Awoniyi has shone in 2017/18.

The Reds utilised the loan market for a variety of reasons in the two transfer windows this season, with youngsters gaining experience and fringe players seeking game time.

Having joined Belgian First Division A side Royal Excel Mouscron on a season-long loan in July, the Nigerian striker departed Merseyside to little fanfare.

But taking up a key role at Stade Le Canonnier, Awoniyi has cause to be named Liverpool’s standout loanee.

Signed from ex-Wolves midfielder Seyi Olofinjana’s Imperial Soccer Academy for £400,000 in 2015, Awoniyi has barely set foot in Liverpool since.

Unable to secure a work permit, he was immediately sent to 2. Bundesliga side FSV Frankfurt for the 2015/16 campaign.

There, manager Tomas Oral vowed to “carefully” oversee Awoniyi’s development, and with Liverpool agreeing an optional second year in their deal with Frankfurt his progression was clearly mapped out.

But his time in Germany did not go wholly to plan, initially due to the form of Zlatko Dedic alongside Dani Schahin, but ultimately due to the diminishing fortunes of his club.

At only 18, Awoniyi could not be relied upon to fire Frankfurt away from relegation, and though he featured in all 13 of their final games in the second tier, starting in 11, he only scored once.

Oral was sacked with five games to go, after a 4-1 loss to VfL Bochum that saw Awoniyi register his only assist of the campaign, threading Schahin through for the opener.

Frankfurt director Clemens Kruger confirmed his desire to extend the striker’s loan towards the end of the season, but gaining experience in the third division was clearly not in Liverpool’s plans. Instead, the Reds agreed a deal with Eredivisie side NEC Nijmegen, with the challenge of establishing himself in the Dutch top flight clearly a step up for Awoniyi.

Having played 921 minutes of football at Frankfurt, he improved on this in Gelderland, with 1,147 minutes for the NEC first team and a further 525 with the U21s in the Eerste Divisie.

He tripled his senior goal tally, too, netting three times and assisting once in 22 appearances, while he produced an impressive run of five goals and one assist in six games for the U21s.

This included a hat-trick in a 5-2 rout of Fortuna Sittard, running riot up against a defence featuring Liverpool target Perr Schuurs.

Awoniyi took a clear step forward with NEC, but suffered relegation for the second consecutive season, which could have served as a bad omen for the youngster.

But his previous loan spells have proved formative, with Awoniyi now a focal figure at Mouscron.

While it took a month of first-team action for Awoniyi to break his duck at Frankfurt, and his first senior goals for NEC came in the final weeks of the season, he hit the ground running at Mouscron.

Making his debut away to KSC Lokeren on his 20th birthday in August, Awoniyi scored the opener in a 2-0 victory, after just 23 minutes on the field.

That began an impressive run that saw Awoniyi either score or assist at least once per game in six of his first eight appearances for his loan club, including further strikes against SV Zulte Waregem, KV Mechelen and AFC Tubize.

Awoniyi is a bulky centre-forward with a prolific record throughout the youth ranks for Nigeria, which led to comparisons with Rashidi Yekini, blessed with pace and an eye for goal.

At Mouscron, he has developed considerably, and this has been aided by his key role under first Mircea Rednic and now, after the Romanian was sacked in February, Frank Defays.

With eight goals in 29 games he is also on course to triple his goal record from the previous campaign again, while he has already laid on five more assists for a total of six.

And he has successfully avoided relegation for the first time in his senior career, with Mouscron heading into the Europa League play-offs despite finishing just three points off bottom.

Awoniyi’s involvement in the play-offs had come under threat after a red card for violent conduct in March’s 2-1 defeat away to Lokeren, but his three-match suspension has since been reduced.

This leaves Awoniyi with at least six games to go until the end of the season, with an unlikely place in Europe’s second-tier tournament to fight for.

It would be a just reward for Awoniyi’s performances, as Mouscron’s joint-top scorer and, crucially, having netted more senior goals than every player on Liverpool’s books bar Sadio Mane, Roberto Firmino and Mohamed Salah.

But after an eye-catching campaign that has seen him garner wider recognition, what comes next?

Beyond continuing his development, the purpose of Awoniyi’s continued spells away from Liverpool is to secure a work permit, as he is currently not able to play competitive football in England.

Encouragingly, he has played 90 percent of available minutes in the Belgian First Division A this season, which would give the Reds sway in an appeals process.

But as a relatively insignificant signing who is yet to establish himself on a regular basis for the Nigeria national team and is unlikely to do so for the World Cup, his chances are still slim.

This will require another loan move next term, with the Liverpool Echo revealing the club’s intentions to tie Awoniyi down to a new contract before agreeing his fourth season away.

And this time out their aim is to send Awoniyi to a side playing in the Europa League, and likely one in La Liga, Serie A, Ligue 1 or the Bundesliga.

If that is the case he would need to avoid the pitfalls faced by a player in the same position, Allan, last season, when the midfielder floundered on loan at Hertha Berlin. The signs are increasingly positive, however, with Awoniyi having visited Melwood during the October international break and being name-checked by loan pathways manager Julian Ward in March.

“We know that work permit-wise it’s a bit of a longer journey so we try to get them adapted to life and football in Europe and started on the process where they gain competitive experience,” Ward said of Awoniyi, Allan and Arroyo.

“Hopefully that will increase their profile and credibility so when the time’s right, we can make that work permit application and bring them back into the fold.”

There will be an element of luck if Awoniyi does eventually break through on Merseyside, but if he continues to perform away on loan he could make his own.

And with Klopp not set to add another striker to his squad this summer as he keeps his faith in Firmino, Danny Ings, Dominic Solanke and Rhian Brewster, there could still be an opening in the future.