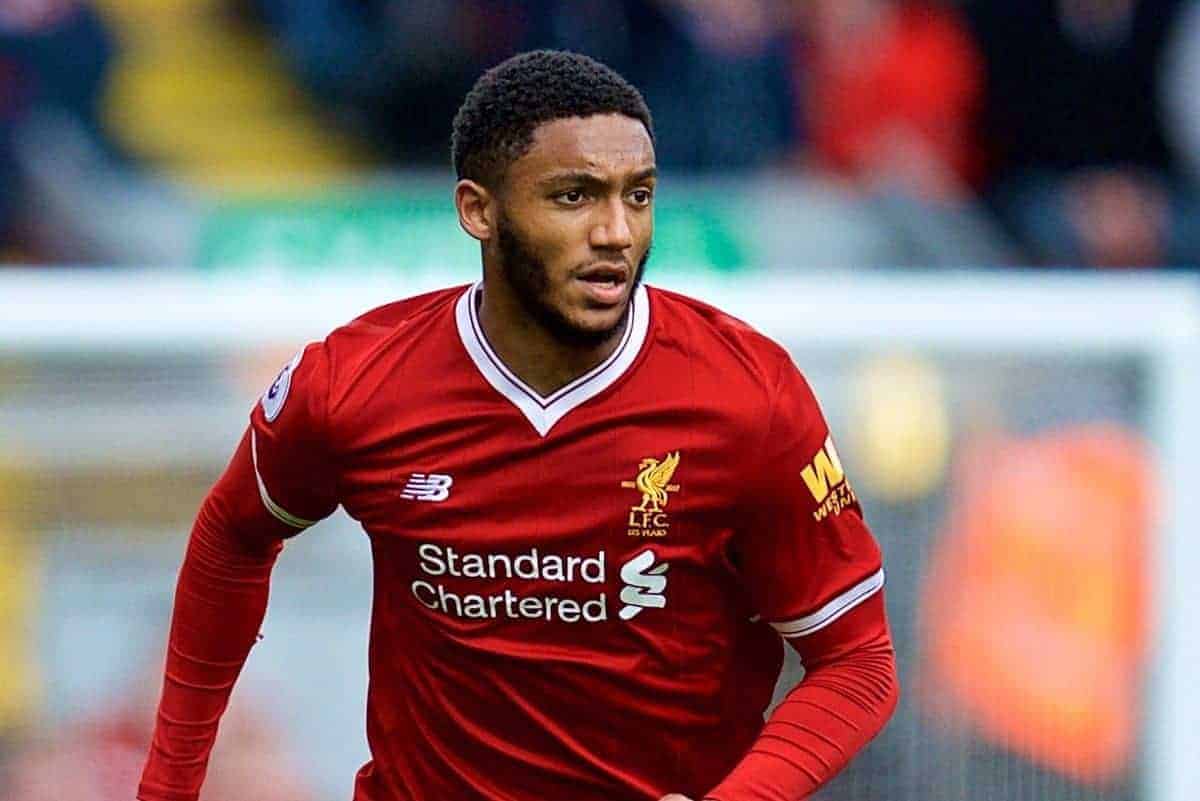 Joe Gomez enjoyed a largely positive season for Liverpool, but a few sloppy mistakes and injuries prevented it from being classed as excellent.

The 2016/17 season was another hugely frustrating one for Gomez, as he struggled to overcome the serious injury problems that hampered him upon Jurgen Klopp‘s arrival at Liverpool.

The 20-year-old was limited to just three appearances in total, with one of those a disastrous showing in the FA Cup defeat to Wolves.

Many felt Gomez would benefit from a loan move away from Anfield in 2017/18, but Klopp decided otherwise, seeing him as someone who could continue to grow at the club.

In the nine months that have passed since, Gomez has matured greatly as a footballer, and only the injury curse has robbed him of a place in England’s World Cup squad. Impressing in a New Role Last July, Klopp spoke about Gomez being an option at right-back, particularly with Nathaniel Clyne set to be absent for a long period of time.

Given his preference for playing in the centre of defence, there wasn’t universal happiness at the manager’s comments, but it proved to be a shrewd move.

Although not as naturally gifted as Trent Alexander-Arnold in an attacking sense, it quickly became clear that Gomez could offer plenty in his new role, with strength, pace and poise in abundance.

An outstanding performance in the 4-0 win at home to Arsenal in August remains one of his best displays for Liverpool, with his inch-perfect cross allowing Roberto Firmino to open the scoring.

A lot of Gomez’s work was solid but unspectacular, which is never likely to earn too many column inches, but given his injury woes the progress being made was sizeable. He was named TIA’s Man of the Match in the Reds’ biggest game of all, Man United at Anfield.

In English football’s most famous fixture, Gomez stood out more than anyone as the two rivals drew 0-0. At that point, he was preferred to Alexander-Arnold.

Life was good for Gomez, and his first England senior call-up in November was just rewards for a string of impressive displays.

Barring the odd minor lapse it had been a largely immaculate first three months of the season, before the errors started creeping in a little more regularly.

Concentration and an unawareness of opponents ghosting in behind was his greatest struggle, as he showed away to West Ham, when his misjudgment allowed Manuel Lanzini to pull a goal back.

Similarly, he switched off at Arsenal with Liverpool 2-0 up, with Alexis Sanchez profiting, and it led to a capitulation that left the Reds 3-2 down prior to Firmino’s equaliser.

Then, in a Game of the Season contender against Man City, which Liverpool won 4-3, Gomez gambled on winning a ball out wide, but lost out to Leroy Sane.

The whippet-like German found the net seconds later, thanks also to some questionable goalkeeping by Loris Karius, and critical eyes were again on Gomez.

It should be stressed that good performances were being produced in between, and during the matches in which these errors took place, but such gaffes at this level must be stamped out. The injury curse then struck representing England in late March, with an ankle problem keeping him out until the 2-2 draw at West Brom on April 21.

It was plain to see that Gomez was not remotely fit at the Hawthorns—he was reportedly in tears after the game, having rushed himself back—and the goalless draw at home to Stoke City seven days later was his last outing of 2017/18.

Ankle surgery confirmed the end of his campaign, as well as his World Cup dream, and his focus now needs to be getting back fit for pre-season.

These concentration and injury issues should not cloud what has been another season of progression, and the potential in Gomez’s boots is great. Some feel Gomez could benefit from a loan spell elsewhere next season, but this is a very short-term view.

It’s not long ago that he was first choice ahead of Alexander-Arnold and playing excellently, and injuries have curtailed his progress more than anything.

The youngster has everything in his armoury to become a future starter for Liverpool, and Klopp should be encouraged to use him more as a centre-back from this point on.

It will take time, of course, and he can still be deployed at right-back if required, but a central berth is where his future lies.

While reports link the Reds with buying an upgrade on Dejan Lovren and Joel Matip this summer, could it be Gomez who steadily becomes Virgil van Dijk‘s long-term partner?

Given Klopp’s preference for blooding youth, you can’t bet against it.

Next season should see Gomez used as a squad player—if he can iron out the mistakes and avoid injuries, it will be a year that sees him take another big leap in the right direction.

Worst Moment: The defensive lapse at the Emirates.