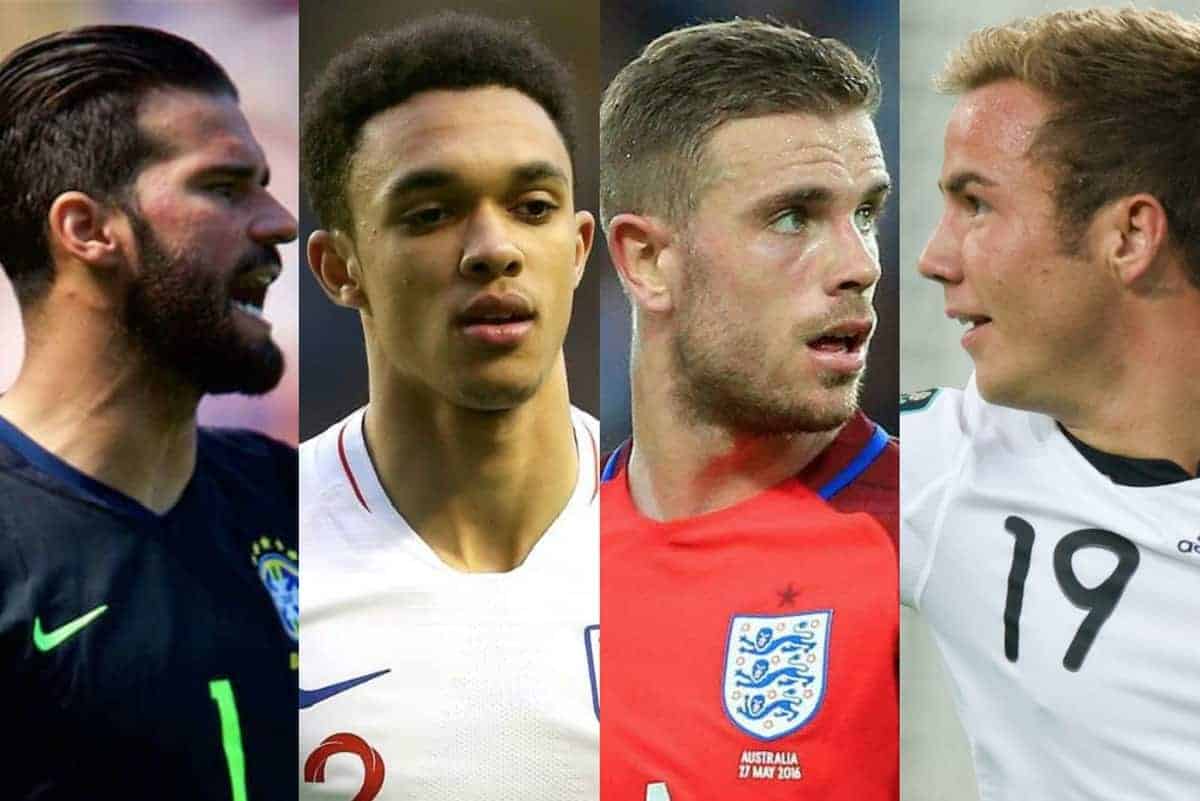 We round up the latest Liverpool news and transfer rumours on Friday, as pre-season plans are finalised and the World Cup kicks off. It looks likely that Liverpool will miss out on Alisson this summer, despite being consistently linked with his signature in recent weeks.

That’s according to Sky Sports, who claim “Real Madrid will make first contact with Roma” with regards to a £43.7 million move for the highly rated goalkeeper.

Roma are believed to want double that amount for one of their most prized assets, but Madrid “would not be willing to go beyond £52.4 million.”

Alisson is only thought to be keen on moving to Madrid rather than Liverpool, with the lure of joining the European champions seemingly too much to ignore.

The Reds’ interest hasn’t been completely ruled out, but it does look unlikely that Brazil’s No. 1 will be at Anfield in 2018/19.

It heightens the chance of Liverpool sticking with an under-fire Loris Karius next season, although they have been linked with Lazio stopper Thomas Strakosha.

Alexander-Arnold Playing for His Family in Russia

Trent Alexander-Arnold is in Russia representing England as the youngest member of their World Cup squad, as his career goes from strength to strength.

The 19-year-old has explained how he is in constant contact with his family, and says all he hopes is to make them proud.

“[Mum] checks up every day to make sure I’m wearing sun cream and everything. She’s so into the details,” Alexander-Arnold told BBC Radio 5 Live.

“The whole family’s like that, we keep well in touch. I call them a couple of times a day.

“It’s them you want to make proud. To see them with a smile on their face and to be proud of me is probably the biggest incentive I’ve got in football.”

What a brilliant lad he is.

Henderson Set to Start For England England face Tunisia in their World Cup opener on Monday night, with Gareth Southgate putting the finishing touches to his plans ahead of the game.

One of his main selection dilemmas has been whether to start Jordan Henderson or Tottenham‘s Eric Dier in defensive midfield, with playing both deemed a negative move.

Although it had appeared as though Dier was in pole position the Guardian‘s Daniel Taylor claims it is Henderson who is set to be selected against the Tunisians.

The 27-year-old will likely to be the only Liverpool player to start, however, with another Spurs man, Kieran Trippier, preferred to Alexander-Arnold at right wing-back.

The decision to choose between Henderson or Dier is a tricky one, but Southgate has been bold, given the latter’s more naturally defensive style.

Henderson is better on the ball than many give him credit for, and it further suggests Southgate is going attacking this summer, which is refreshing. It’s easy to forget that Mario Gotze was Liverpool’s first-choice transfer target two years ago, prior to Sadio Mane joining the Reds.

A move never materialised, however, and the German has since suffered with health problems during a disappointing second spell at Borussia Dortmund.

On Thursday, the Mirror reported that Gotze was on the radar of five different Premier League clubs, including Arsenal and Everton, but Liverpool were not one of them.

Despite this, the Reds are the bookies’ favourites to snap him up this summer, with Ian Marmion from BetStars writing:

“Liverpool have emerged as the outright favourites at 5/2 to snatch the attacker this summer after the German described Jurgen Klopp as his ‘footballing father’.

“The 26-year-old could be the ideal replacement for the Reds’ previous transfer target Nabil Fekir and a reunion with his former manager at Anfield next season looks like a strong possibility.”

These odds should be ignored, with the likelihood of Klopp reconvening with his former favourite hugely unlikely.

The 26-year-old’s best days look behind him, despite his relatively tender age, and Liverpool have moved on.

A decision in defence & whether to risk Thiago – Predicting Liverpool’s lineup vs. West Ham

A decision in defence & whether to risk Thiago – Predicting Liverpool’s lineup vs. West Ham