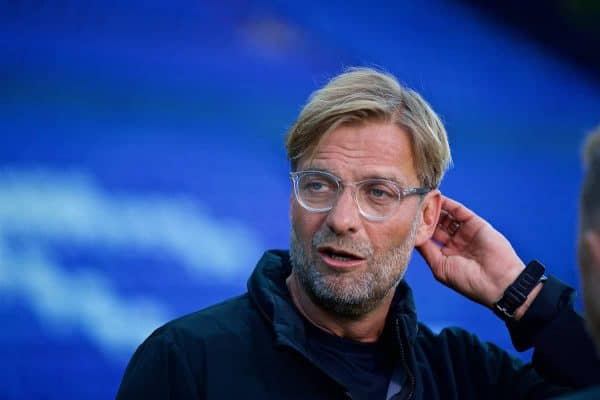 All you need to know as the Reds kick off pre-season – Chester vs. Liverpool Preview

Liverpool begin a run of nine pre-season friendlies with a clash at Chester on Saturday afternoon, providing Jurgen Klopp with a chance to experiment.

Seven weeks on from the Champions League final and the Reds are back in action as they make the short trip down the M53 to Chester, where they take on Bernard Morley and Anthony Johnson’s National League North contenders.

The first of four domestic friendlies, this meeting with sixth-tier opposition should be the perfect primer as Klopp builds for a successful 2018/19.

Last summer Liverpool opened their campaign with a 4-0 win over Tranmere Rovers, and the manager can hope for similar before another trip to Prenton Park on Tuesday night.

Here’s all you need to know as the Reds prepare to kick off pre-season.

Liverpool returned to Melwood to begin training in the sweltering heat on Monday, and Klopp’s latest backroom appointment, the returning Pepijn Lijnders, has been integral to sessions.

The Reds staff welcomed back a 28-man squad, but this will be reduced to at least 26 for Saturday’s friendly, with Joel Matip and Adam Lallana doubtful.

Meanwhile, Allan Rodrigues is unlikely to feature after undergoing shoulder surgery in April, and both Alex Oxlade-Chamberlain and Rhian Brewster are also injured.

And both Virgil van Dijk and Georginio Wijnaldum were given an extended break, with their return pencilled in for Sunday.

Klopp has confirmed he will endeavour to field a different XI in either half, and plans to give Naby Keita and Fabinho their debuts, while a host of fringe figures and youngsters could be involved too.

Kamil Grabara, Nathaniel Phillips, Pedro Chirivella, Curtis Jones and Harry Wilson are among those who could play.

The Reds have never taken on the current incarnation of Chester, but did meet the city’s previous outfit in a two-legged FA Cup third-round clash back in 1946.

Liverpool also took on the Seals in six friendlies, including a 1-0 defeat on the 10th anniversary of the Deva Stadium in 2002, eight years before Chester City were dissolved and Chester FC was established.

Under new co-management in Morley and Johnson, Chester are looking to bounce back from relegation to National League North, and will rely on the performances of the likes of Scott Burton and Jordan Archer to do so.

The two clubs have agreed that the hosts will keep 100 percent of the takings on the day, with chairman David Harrington-Wright telling the Liverpool Echo it would make “a big difference.”

Deva Stadium was opened in 1992, succeeding Chester’s previous home of Sealand Road, and consists of a 4,500-capacity seated area and 626 standing.

It has hosted both the Liverpool U23s and Ladies sides in the past, and the pitch has been newly relaid this summer, with Harrington-Wright confirming the Reds “will be the first ones to christen it.”

Speaking ahead of his side’s pre-season opener, Klopp explained his intentions to rotate and stressed that the clash would be “quite intense”:

“[Naming two different XIs] makes sense, from the intensity side.

“After the holidays, the boys have to adapt to the intensity and stuff like that—all the things we did in training. So it makes sense that they play 45 minutes.

“I’m not sure if we have two complete teams because not really all positions are covered. But that’s the plan. Go there and get used to proper football again, that’s why we do it.

“So I’m looking forward to it. It’s a first little test for us and hopefully we are ready. We always do it out of full training; we don’t think too much about the games during the week.

“So that will be quite intense for the boys, especially with these temperatures at the moment. But it’s all good, let’s go.”

Chester vs. Liverpool will broadcast live on LFCTV and LFCTV GO, with their coverage getting underway at 2pm and kicking off at 3pm.

This is Anfield’s live blog will be hosted by Chris Williams, who will provide biased coverage of the Reds’ maiden summer clash—with a healthy reminder that this is just pre-season!