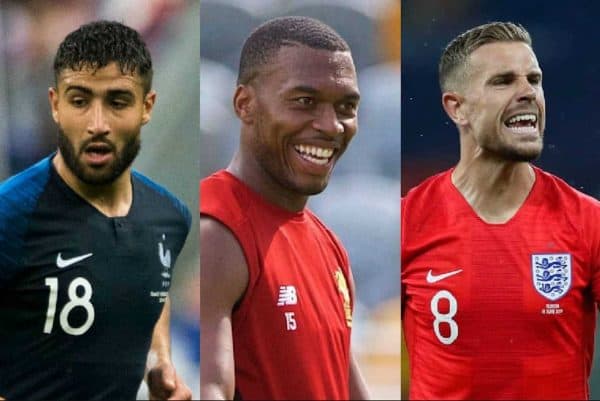 We round up the latest Liverpool FC news and transfer rumours on Wednesday, as the Reds’ first game of pre-season edges closer.

The Nabil Fekir saga rumbles on on a daily basis, with a deal for him dead in the water one minute and very much alive the next.

“If there is a possibility like with Liverpool, Nabil will certainly seize the opportunity, once both parties agree.”

It definitely sounds as though the Ligue 1 club are resigned to losing their star man, despite holding out a certain degree of hope that he will stay.

Gensio’s words though suggest that he’s talking about if another ‘big club’ come in then Fekir will be allowed to leave.

Will concerns surrounding his supposed dodgy knee continue to be an issue?

England may be flying at the World Cup but it is threatening to prove problematic for Liverpool’s pre-season schedule.

The Three Lions face Sweden in the quarter-finals at 3pm (UK time) on Saturday, at precisely the time the Reds kick-off at Chester.

Despite calls to move the game forward to midday, Chester chairman David Harrington-Wright says it isn’t feasible despite the club’s best efforts:

“When the fixture was first discussed there was a possible clash with an England quarter final in the World Cup,” said Harrington-Wright.

“We requested a kick off change then but that was the only time Liverpool could do. Premier League players are like racehorses and pre-season training is something that is planned to the very last detail, so a change in times would disrupt their plans.

“It has been mentioned since then but it is highly unlikely to be moved. At this late stage the logistics of it would be difficult too. We know it provides a dilemma to fans and we fully expect the crowd to be less on Saturday.

“But it is important to remember that Liverpool have been very good to us with this friendly. A strong team is coming and we will keep all the gate receipts from the clash. We have sold the tickets and received the money, so there is no loss to the football club from a business point of view really.”

Incidentally, should England get past Sweden on Saturday, their semi-final against either Russia or Croatia next Wednesday would clash with Liverpool’s trip to Tranmere Rovers.

The game at Prenton Park starts at 7:45pm, while England would get underway at 7pm.

Wilson Looking To Take His Chance

Harry Wilson‘s Liverpool future is one that will be determined this pre-season. The young Welshman clearly thinks he can prove his worth at Anfield, hoping that this season will be one that sees him flourish.

“Last year I was desperate to make an impact in pre-season but I picked up a little injury and that stopped me doing so,” Wilson told Liverpoolfc.com.

“With the loan spell behind me, I’ve got a lot of confidence and belief that this season can be my season.

“I went out and got the minutes I needed, scored a few goals and helped Hull climb the table a bit. I really enjoyed that. Now I’m focusing on doing well in pre-season and hopefully getting into this team.”

It’s great to hear Wilson be so bullish about impressing – now it’s time for him to prove his worth in pre-season for the Reds.

Meanwhile, the Daily Star claim Brendan Rodgers will try to bring Wilson to Celtic before Thursday’s Champions League signing deadline – take that rumour with a pinch of salt.

It’s no secret that Daniel Sturridge will be sold (or loaned again) this summer, despite returning to Melwood this week.

The 28-year-old is still sure to have a number of potential suitors, given his natural talent and goalscoring ability.

A move to Turkish club Besiktas has been mooted, but reports in Fanatik claim a deal is now unlikely.

That’s because they are unwilling to meet Liverpool’s £15 million valuation of the player, perhaps due to his injury struggles.

It will be interesting to where Sturridge ends up next season – if he can stay fit he will be a real asset to someone.

Jordan Henderson may have missed his penalty for England against Colombia on Tuesday, but he was again outstanding for the Three Lions, as he has been throughout the World Cup.

Henderson divides opinion, but an interesting statistic has cropped up that outlines the influence Liverpool’s captain has for his country.

28 – Jordan Henderson has not ended on the losing side in any of his last 28 England matches (W22 D6), the longest unbeaten run of any England player in history. Importance. #COLENG #ENG #WorldCup pic.twitter.com/1c21bups1W

The 28-year-old is unbeaten in his last 28 England games – 22 wins and six draws – which is the longest unbeaten run by a player in the national team’s history.

Make of that what you will…