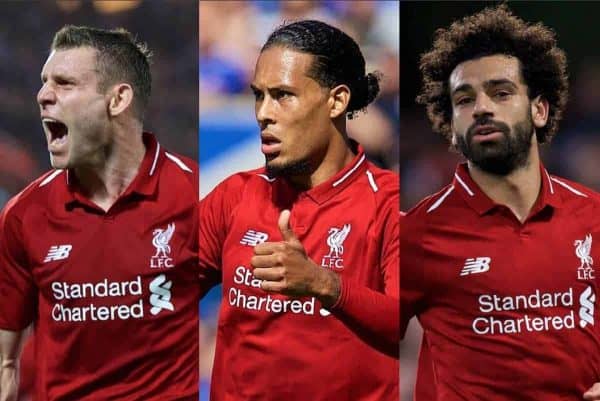 Previously ruled out until November, James Milner is reportedly in line to return to training this week, as Liverpool prepare to take on Huddersfield Town.

The veteran midfielder was forced off the field just 29 minutes into the Reds’ 0-0 draw with Man City, which conveniently came just before the international break.

Already retired from England duty, Milner has spent the past eight days in recovery, but was not expected to make his comeback until early next month.

However, according to the Mirror‘s David Maddock, who has provided a positive triple injury update, he could in fact rejoin training before Saturday’s game.

Liverpool make the short trip across to Huddersfield for a 5.30pm kickoff, and Jurgen Klopp‘s backroom staff “will give him every chance” to take part.

Maddock claims Milner “will have to resume full training with the squad by Thursday, but he hasn’t ruled that out,” which would be a remarkable testament to the 32-year-old’s fitness.

Meanwhile, it is also reported that Mohamed Salah “should be allowed to resume training” this week, after picking up a minor groin injury with Egypt.

With Netherlands manager Ronald Koeman already confirming that Virgil van Dijk had arranged to depart from his squad in order to make the Liverpool squad for Huddersfield, this is a major boost.

While Salah has struggled to reach the heights of last season, all three have been key players for Klopp so far this term, and have featured in every Premier League game.

Finally, while Sadio Mane left Senegal duty with a broken thumb on Monday, he isn’t expected to miss any playing time due to the minor injury.

Sixteen Liverpool players can be expected to be in action for their international sides on Tuesday, including first-team regulars Alisson, Fabinho, Naby Keita, Gini Wijnaldum and Roberto Firmino.

Academy striker Liam Millar is the last in action, as Canada take on Dominica at midnight.