The Magpies have struggled early on this season and are winless after eight games.

Their porous ways continued as, despite leading 2-0 at Old Trafford before the international break, they collapsed to lose 3-2 to Man United, leaving them 19th place.

Benitez worked wonders in January last term, securing three key additions to push Newcastle to a strong second half of the season, finishing 10th in the end.

And he’s hoping for more of the same this year—with two Liverpool attackers on the radar.

Chronicle Live report that the former Anfield boss wants to sign either of Divock Origi or Dominic Solanke—but the former seems more probable. 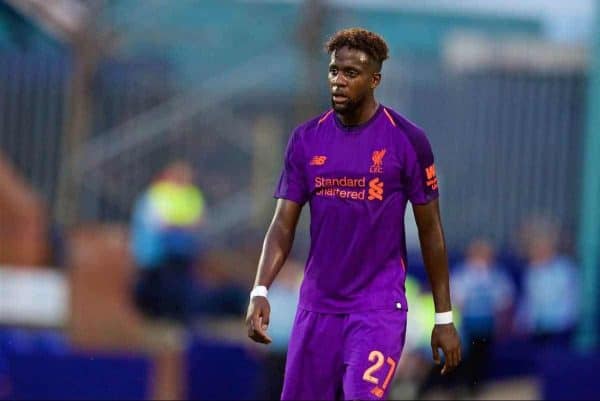 That’s because Newcastle already have the maximum of two players at the club on loan from fellow Premier League sides, meaning any business with another top-flight team must be a permanent deal.

Origi has already had interest from the Turkish SuperLig and just last week Everton were mentioned as another possible team looking at signing him.

As far as the Reds are concerned, the more the merrier: there’s a better chance of driving the price for Origi up if multiple teams want to sign him, and less chance of it ending up as a loan deal exit, which Liverpool clearly don’t want.

Origi seems at least fourth-choice centre-forward right now, and given Rhian Brewster is on his way back from injury and Mo Salah can also rock up through the centre when needed, it’s arguably only going to get worse for the Belgian.

As for Solanke, the situation is different.

Despite playing a big squad role last season, he’s still only 21 years old. International youth football and a loan spell playing regularly elsewhere will make a world of difference to him across the next 18 months or so.

It’s then we’ll really see his true ceiling, rather than watching him as an inexperienced 20-year-old trying to come on and mimic the output of a full-throttle Salah-Firmino-Mane attacking triumvirate.

As Newcastle cannot loan anyone, it seems unlikely we’ll see Solanke head to St. James’ Park in January—unless it’s a deal structured to allow the Reds to re-purchase the striker for a relatively low-cost deal in a year or two.

Time is on his side either way, which isn’t something that can be said for Origi, who will be 24 at the end of this season with a single year left on his contract.

Neither forward have played yet for Liverpool this season, and that’s not hugely likely to change in the coming weeks other than perhaps the odd sub appearance, especially if the current climate of injuries continues to affect the attack.

UPDATE: ESPN have since reported that Origi remains the subject of interest from Everton, who have made “tentative checks” on his availability.