Jurgen Klopp has provided a positive update on the availability of Virgil van Dijk for Liverpool’s clash with Leicester, following a bout of illness.

Van Dijk was considered a doubt for Wednesday night, with the Dutchman having been sidelined since the Reds’ return from a four-day training camp in Dubai.

He was reported to have missed training for the past four days, including on Monday evening, and therefore it would depend on whether he was able to take part on Tuesday.

But speaking at Melwood ahead of the Anfield tie, Klopp revealed that Van Dijk had in fact trained this week, which would indicate that he is ready to start against the Foxes.

The manager also suggested Gini Wijnaldum would also be in contention after a knee injury, while Dejan Lovren and Fabinho are also fit, though he was less optimistic over Trent Alexander-Arnold and Joe Gomez.

“Virgil was a little bit ill, but he trained yesterday so we will see,” he told reporters.

“Trent is getting closer and closer, it looks all very positive, but will not be ready for tomorrow. [Gomez] no.” 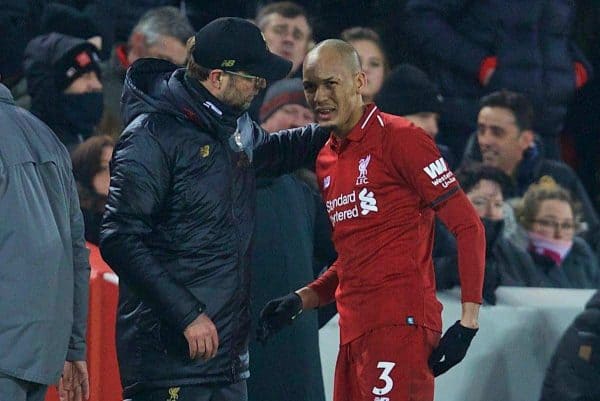 This is a major boost for the Reds in terms of their centre-back options, with Van Dijk and Lovren joined by Joel Matip as options.

There are more problems at right-back, with Alexander-Arnold and Gomez injured and James Milner suspended, and therefore Fabinho, Rafa Camacho and Ki-Jana Hoever will be in consideration.

Most likely is that Fabinho will start in his third different position this season, and this will be aided significantly if Van Dijk is passed fit to line up alongside him.