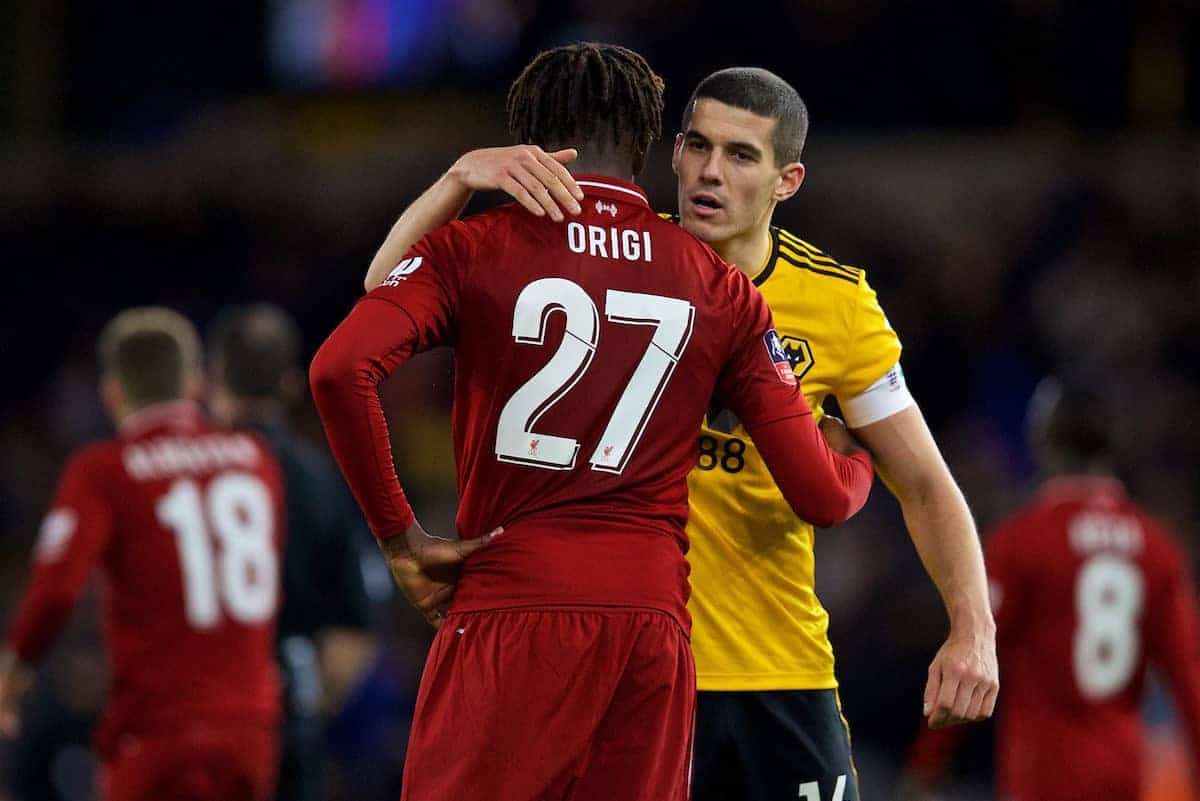 Liverpool were knocked out of the FA Cup after a 2-1 defeat to Wolves on Monday night, with supporters left with mixed feelings about the result.

On a strange night at Molineux, the Reds bowed out at the first hurdle, as a much-changed lineup struggled to get going.

Raul Jimenez opened the scoring in the first half, and while Divock Origi levelled expertly after the break, parity was not restored for long.

Ruben Neves fired home from distance to send Liverpool packing, on a night when Rafa Camacho, Curtis Jones and the impressive Ki-Jana Hoever were all handed debuts.

Fans were delighted to see Hoever come on, and the 16-year-old impressed for the most part…

Hoever has had a brilliant game tonight, future looks bright for him #LFC

Hoever’s been our best player ffs

Mignolet beaten twice at his near post there. Am I being too harsh?

In particular, Keita failed to take his chance…

What is wrong with Keita he’s fucking weird

Shit pass by Keita who could've given a shooting chance to Salah. He's been underwhelming.

“Really think we should be seeing more of Naby now.”

Can’t wait for the lad Keita I watched all the YouTube videos of to arrive at the club. Will make such a difference to this team.

Sturridge failed to impress and was subbed late on…

“Oh well, some pluses and some players we shouldn’t see again, aka Sturridge.”

Sturridge was shocking. Can this guy not run anymore? Would rather Origi be backup than him

Massively disappointed in Sturridge, Milner, Keita and Shaqiri tonight. They’re the lads who needed to drive that tonight. And none of them stepped up.

Fabinho was impressive at centre-back…

Only 1 fit CB now, but Fabinho looked good. Think Lovren proved any CB goes up a level next to Van Dijk, think Fabinho-VVD will be a good partnership till Gomez is back.

Think Fabinho probably starts at centre-back with Van Dijk at Brighton. Thought he was one of the few that did well tonight.

“Fabinho is very calm, even when panicking.”

At full-time, most fans focused on the bigger priorities…

Never nice to exit the FA Cup. Still a huge trophy imo. But this season of all seasons, things can wait. Though Hoever gave a superb account of himself, massive future for that lad. The fact he's still 16 is ridiculous. #LFCdigest

Never nice to go out of the cup but bigger fish lie ahead. It has to be the league this year no matter what. #LFC

“We better win the bloody league now, sick of going out of these cups far too early.”

Genuinely not arsed. Some will try to suggest that’s some sort of shock, but it will help us in the long-term this season. Hope Spurs & City get all the way to the semis.

Liverpool go out.
Majority of fans shrug.
Now on to Brighton. #haiku

“Have to admit, I’m not disappointed to go out early. I did not want us having a run in this competition this year.”

Disappointed with a few performances there tonight but notably not the youngsters though!1st half was ridiculously poor.Well we’ve no complaints now about not having enough rest!free weekends on the way?

I've no issues with the team selection. This season is all about the EPL. A clear weekend at the end of Jan and no fixture pile up will be far more beneficial to a title challenge than a cup run. #lfc