Virgil Van Dijk expects Bayern Munich to come at them in the Allianz Arena but believes the defensive resolve shown this season puts Liverpool in a good position.

However, he accepts they will have to improve their away record as they have lost the last five Champions League matches not played at Anfield.

Jurgen Klopp returns to Germany after a goalless last 16, first leg at home, where Bayern left happiest with the draw.

But Liverpool’s defensive record, particularly domestically where they have conceded just 17 goals in 30 Premier League matches, means it will not be easy for the German champions.

“They played very well here, kept it tight especially at the back and they obviously showed us a lot of respect,” said Van Dijk.

“They changed a bit the way they played I think, so we need to be up for a big fight because they are probably going to come all in, especially in the beginning.

“It is going to be tough and we need to do better than we did in the last away games in the Champions League.

“The group stage games were not as good as we wanted but we got through to the knockout phase.

“To keep a clean sheet in the first leg is always good for both teams but we know if we score they need to score two. That is how it is. We want to win the game and go through.” 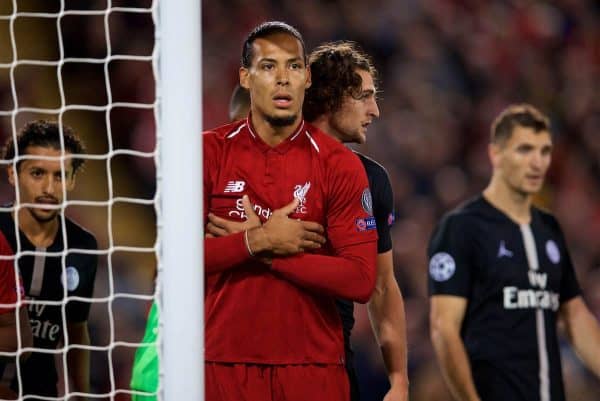 Van Dijk has been a key part of Liverpool’s huge defensive improvement, justifying the £75 million outlay on him just over a year ago.

His commanding presence and organisational skills give the side something they were lacking before and, after being suspended for the first leg, his experience will be vital at the Allianz.

“Sometimes you have to know how to manage games because at times it is going to be very hard and we will need to patient, ready for what is coming,” he added.

“There will times when it is going to be very tough, we are going to be under pressure because they have a lot of quality and they showed that.

“But we will definitely have our own moments because of the quality we have as well.”