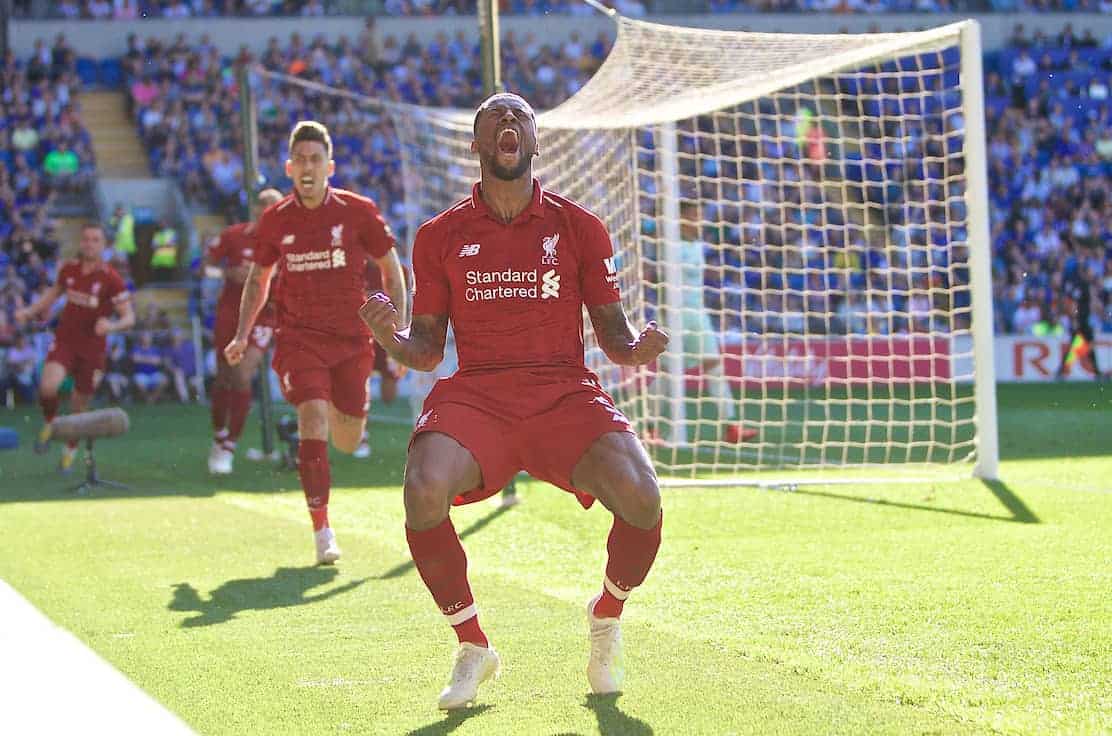 Liverpool returned to the top of the league as second-half strikes from Gini Wijnaldum and James Milner secured a hard-earned 2-0 victory against Cardiff.

A virtual spectator for large periods in the game, Alisson was alert to make a sharp save to deny Oumar Niasse after Liverpool failed to clear their lines from a corner.

A touch fortunate after flapping at a corner in the second half which very nearly resulted in an equaliser for the hosts, but kept his 19th league clean sheet of the season, putting him two clear of Ederson in the golden glove stakes.

Well off his best during the first half, giving the ball away in the final third which led to a Cardiff chance, and beaten for pace on a couple of occasions by Nathaniel Mendez-Laing.

Created a decent chance for Mane with a trademark whipped ball across the six-yard box, which the Senegalese could not convert.

Supplied the assist for Wijnaldum’s goal with a clever, low corner, taking his tally up to 10 assists for the season—just one behind Robertson.

Liverpool came under more pressure than many might have anticipated here, as Cardiff battled hard for every ball as they fight to avoid relegation, and both Matip and Van Dijk had to deal with plenty of high balls into the box.

Matip has often been criticised for lacking physicality and aggression in the past, but he stood up to the challenge impressively here and defended superbly whenever called upon.

Also bringing the ball out from the back calmly and with purpose, he helped drive Liverpool forward on the attack as well, and deserves credit for his consistent performances over the course of the second half of the season. 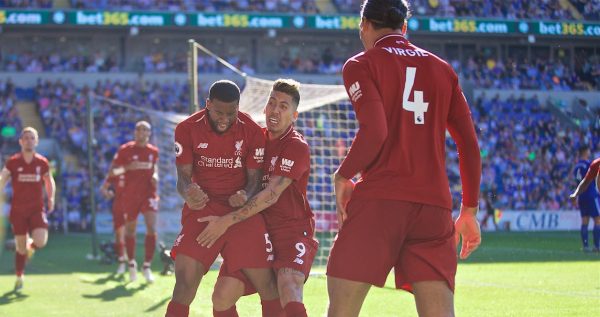 Similarly impressive, alongside Matip, Van Dijk took responsibility for winning his aerial duels and ensuring Liverpool gave nothing away as Cardiff looked to hurl the ball into the box from corners, throw-ins and free-kicks.

On a couple of occasions, he appeared a little rushed as he cleared the ball out of play when a simpler passing option was available, but in general this was another dominant showing from the Dutchman, who was deservedly named among the six nominees for PFA Player of the Year—an award he is surely the favourite to win.

Robertson was called into action relatively early on as a dangerous ball across the box reached the back post, where he positioned himself well to clear his lines.

Relatively subdued in an attacking sense throughout the first half, he got forward with greater regularity in the second half as Liverpool caused Cardiff all kinds of problems down the left, as Robertson and Mane linked up well.

His final ball wasn’t quite there, but as ever, the Scotsman was a useful outlet and never stopped running.

A fairly quiet first half for the Dutchman, who was deployed in the No.6 role in place of Fabinho; you wondered whether it might be one of those strange Wijnaldum away performances where he struggles to make a tangible impact.

He then stepped up with a crucial contribution, though, smashing the ball into the top corner from Trent’s corner after pulling away into space in the box.

After being rested in the last league game against Chelsea, Wijnaldum looked a touch sharper and more energetic here after some lethargic showings over recent weeks and did plenty of important, but understated, work out of possession at the base of the midfield. 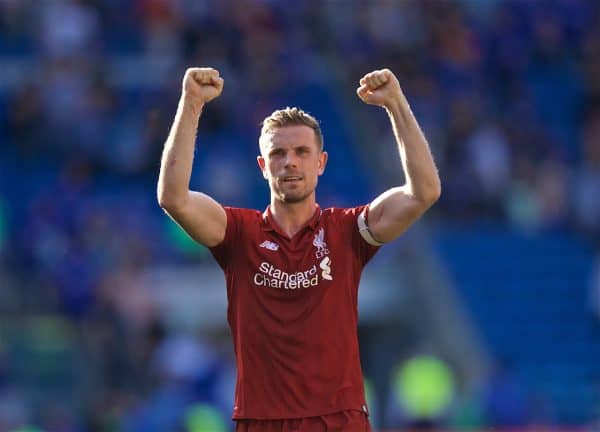 Deployed in an advanced midfield role again after his impressive recent performances, Henderson had license to get forward and join the attack, putting Salah clear on the counter-attack on several occasions.

Effective in regaining possession and keeping Liverpool on the front foot, Henderson really ought to have doubled Liverpool’s advantage as he leant back and scooped his shot well over the bar from a promising position after Mane’s cut-back.

Nonetheless, he played an important role in keeping Cardiff penned back as Liverpool cranked up the pressure in the second half, and made a couple of key recovery challenges after tracking back diligently.

Starting his third successive league game, Keita constantly showed for the ball and took up some excellent positions at times, drifting into space which drew Cardiff’s defenders out of shape as they tried to close him down.

His decision-making was mixed, but there were more signs of his growing confidence and evidence of him getting to grips with what is required of him out of possession in this role.

Won the ball back well before playing Mane in for Henderson’s chance in the second half, before being substituted for Fabinho as Klopp looked to tighten up the midfield in the closing stages. 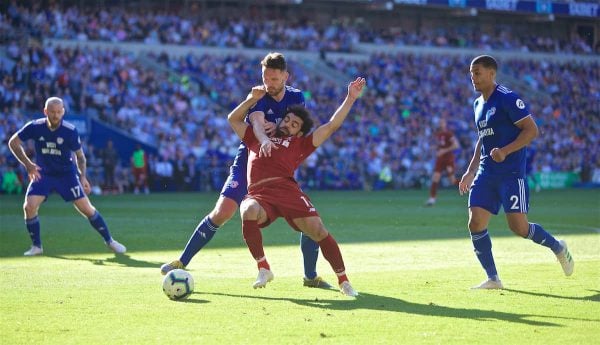 Found himself with several promising opportunities on the break, but took a touch too many in several instances before getting crowded out by Cardiff defenders.

Combined nicely with Mane to carve out the opening for Firmino’s chance, but was unable to make the breakthrough when sent through on goal by Henderson, as Neil Etheridge blocked his shot.

Won the penalty in the second half which wrapped up the victory after using his body well against Sean Morrison, before being manhandled with two arms around his neck. Plenty will twist it as though it was a dive, but he had every right to go down in that situation.

Could have scored in the closing stages, as Etheridge made an excellent stop from close range after Salah latched on to Firmino’s through ball.

Missed a glorious chance with the goal gaping in the first half, inexplicably firing high and wide with only the goalkeeper to beat.

The Brazilian found his way into the game impressively, however, and his influence grew as the game went on, finding pockets of space by dropping deep to receive the ball and kick-start attacking moves.

Twisting and turning away from Cardiff’s defenders and midfielders, Firmino was an important factor in Liverpool’s strong second half performance and he should have had an assist after playing Salah in on goal superbly right near the end.

Looked to continually link up with Keita down the left, and put the ball on a plate for Firmino with a precise through ball. Should perhaps have done better from close range as he fired over from Trent’s driven cross in the first half.

His curling effort which narrowly sailed over the bar early in the second half exemplified Liverpool’s intent after the break, and Mane was, once again, Liverpool’s most consistent attacking threat, tormenting Cardiff’s backline at every opportunity.

One run, in particular, saw him somehow hold on to the ball for what seemed like forever, evading multiple challenges and showcasing his extraordinary strength to outmuscle his opponents and wriggle his way into the box. A player right at the top of his game. 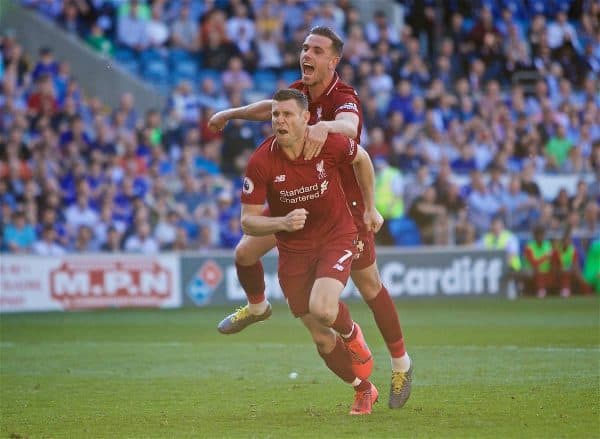 Lasted only five minutes before having to leave the pitch as a precaution after a nasty clash of heads.

Straight on for the injured Fabinho, Milner was typically ice-cool from the penalty spot as he clinically dispatched his 7th goal of the season

Little to do in his brief cameo, but great to see him get a few more minutes under his belt again after making his return against Porto.

Klopp will have expected this to have been a tricky assignment coming off the back of the Champions League in midweek, and with Cardiff desperately battling against relegation.

It was a big call to keep Fabinho on the bench and reinstall Wijnaldum in the No. 6 role, and at times it was difficult not to feel as though Liverpool might have benefited from the Brazilian’s presence in midfield.

That said, Klopp acted at the right moment to make the change in the second half, only to see Fabinho needing to be replaced after a head injury, forced into introducing Milner—who then scored the penalty to kill the game.

Ultimately, it was far from Liverpool’s finest showing, but at this stage in the season, results are everything—and he will be delighted with the three points and clean sheet, following a focused and professional second-half display in which Liverpool knew they simply had to score, and never slipped into panic mode.