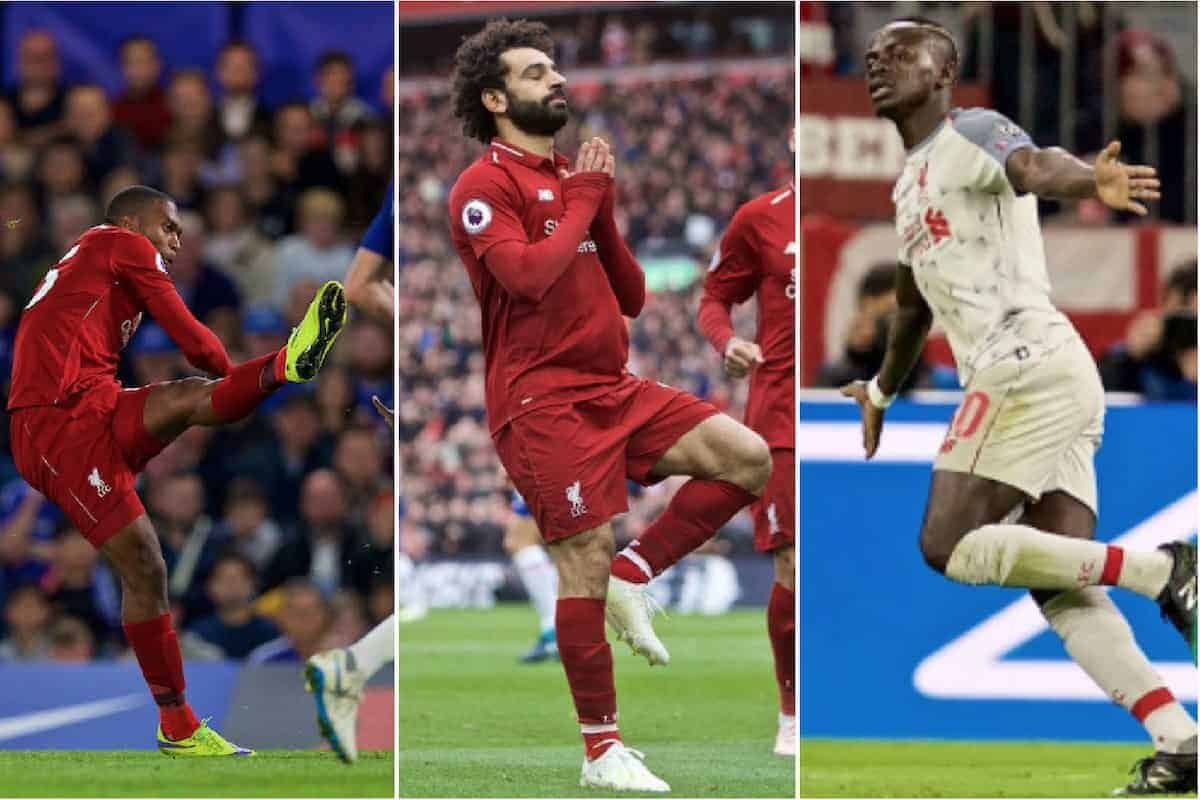 Liverpool have scored a total of 113 goals during a fantastic 2018/19 season, but which 10 strikes stand out from the rest?

The Reds fell painfully short of winning the Premier League title on Sunday, but their efforts cannot be questioned in the slightest.

Jurgen Klopp‘s side reached 97 points in their 38 matches and they still have a Champions League final against Tottenham to look forward to.

As usual, Liverpool have entertained supporters with some magical football throughout the campaign, with some stunning goals scored along the way.

Here is what we believe are the Reds’ top 10 best goals in terms of the quality of goal itself – meaning Divock Origi‘s winner against Everton just misses out!

Reds fans may never wish to watch back the 2-1 defeat to City in January – incredibly their only Premier League defeat of the season – but Roberto Firmino‘s equaliser should be a goal that is treasured.

A patient, intricate team move culminated in Trent Alexander-Arnold brilliantly picking out Andy Robertson at the back post, who crossed on the volley for Firmino to poke home.

It will likely end up being a great forgotten Liverpool goal, sadly, much like Daniel Sturridge‘s against Sevilla in the 2016 Europa League final. 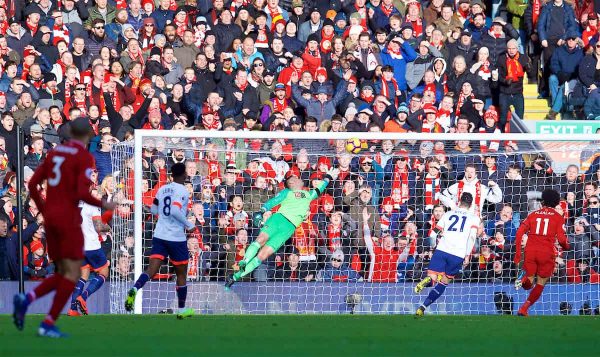 Gini Wijnaldum has been one of Liverpool’s most unsung heroes this season, but he managed to make the headlines at home to Bournemouth in February.

The Dutchman made a clever run into the penalty area, receiving Robertson’s pinpoint pass, before lofting a beautiful effort over Artur Boruc.

It was the kind of goalscoring ability that was more on show during Wijnaldum’s Newcastle days and perfectly illustrated the technical quality he possesses.

Mohamed Salah has supposedly been ‘below par’ in 2018/19, despite topping the Premier League scoring charts with Mane and Pierre-Emerick Aubameyang.

One of his best strikes of another influential season was the hat-trick-completing effort at Bournemouth before Christmas.

The Egyptian pounced on some shaky defending and raced through, rounding Asmir Begovic, dummying him and finishing calmly.

One performance that summed up how special this Liverpool team is was the rout of Arsenal at Anfield, with Klopp’s men running out 5-1 winners.

The standout moment was Firmino’s second goal, on an evening when the Brazilian registered a hat-trick.

The ball broke to him 40 yards from goal, before a slaloming run saw him beat two Arsenal defenders and fire into the net, sending Anfield wild.

In what was undoubtedly one of the best moments of Liverpool’s campaign, Salah kept the Reds’ title charge alive.

An awkward trip to Southampton was heading towards a damaging 1-1 draw when Jordan Henderson guided a header to Salah well inside his own half.

The 26-year-old proceeded to run at the Saints defence, aided by a typically unselfish run by Firmino, and then curl a perfect finish in off the post.

The away end erupted, as Salah yet again showed how priceless he is.

Back in September, Daniel Sturridge felt like he would be a key squad member this season – who knew this beauty at Chelsea would probably he his last goal for the club.

The striker’s impact at Stamford Bridge will not be forgotten, however, when it looked as though the Reds were crashing to their first league defeat of 2018/19.

There have been few better natural finishers at Anfield over the last decade. 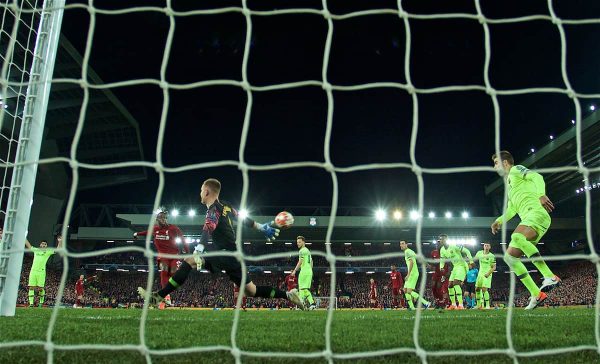 Liverpool’s 4-0 victory over Barcelona last week was a truly great night in Reds history, capped off by one of the most original goals in years.

With the scores tied on aggregate, a piece of opportune magic from Alexander-Arnold saw him whip a quickly-taken corner into the box while Barca were napping.

Origi was on-hand to lift an excellent, and underrated, finish into the Kop net, sending Liverpool into the Champions League final.

It was as much Alexander-Arnold’s goal as it was Origi’s.

Mane has been his side’s most consistent attacking player since August and it was in and around the 5-0 thrashing of Watford in February that he really started to hit top gear.

The Senegalese scored an outrageous goal to put Liverpool 2-0 up early on Anfield, making up for a heavy touch by producing a remarkable back-heeled finish past Ben Foster.

In terms of unique individual artistry, few goals have been bettered anywhere over the past nine months.

Behind the smiles, Salah is ruthless operator, and somebody for whom criticism will only spur him on.

After a week that saw Chelsea fans singing vile racist chants about Liverpool’s No.11, he came back to haunt his former employers in style.

A huge occasion at Anfield saw the Reds needing a win to keep the pressure on City, but they were only 1-0 up early in the second half.

Salah then produced one of his greatest moments for Liverpool yet, cutting inside and burying an unstoppable shot into the top corner from 30 yards.

Picking a No.1 is always going to be subjective, but Mane’s unbelievable solo effort away to Bayern Munich tops the pile.

The scores were still locked at 0-0 on aggregate, following a stalemate at Anfield, when the forward stunned the Allianz Arena.

Virgil van Dijk‘s inch-perfect long pass was killed in an instant by Mane’s first touch, and he then dummied Manuel Neuer and dinked the ball into the net.

It was piece of genius by not only one of the Premier League‘s best players, but also one of Europe’s finest.

Having said that, here’s hoping a new No.1 takes Mane’s place in Madrid next month!