Liverpool manager Jurgen Klopp was disappointed his side did not get the reward their performance deserved after a 3-0 defeat in their Champions League semi-final first leg in Barcelona left them with a mountain to climb.

Having matched their opponents for 75 minutes, trailing to just former Reds striker Luis Suarez’s goal, they were undone by one piece of bad luck and another of world-class brilliance.

Lionel Messi scored one of the easiest goals with a tap-in after Suarez’s effort had rebounded off the crossbar but then brought up the 600th of his career in style with an inch-perfect free-kick.

Liverpool, however, had no luck in front of goal with Roberto Firmino’s shot being cleared off the line and Mohamed Salah drilling the rebound against a post.

“I am not sure if we deserved a lot more than we got. We played a really good football game, but in the end they scored three and we didn’t score and we just need to accept that,” said Klopp.

“As a manager, what I judge on is how we played. I am completely happy and proud of the boys.

“I think it was the best Champions League game we played not only this year but last year as well. Against a side like this, playing this kind of football I was completely happy.

“Whatever happens, these boys, I couldn’t be more proud of them.

“People who haven’t seen the game will see the result and say strange things about it, but they always strike back in these kind of games. How brave they are, I just like it.

“And in the end it is still 3-0, it will not change. So let’s fly home and play Newcastle.”

Messi proved to be the decisive factor but Klopp insisted it was not anything he had not seen before.

“In these moments he is unstoppable. We couldn’t defend the free kick. What a strike!” he added. 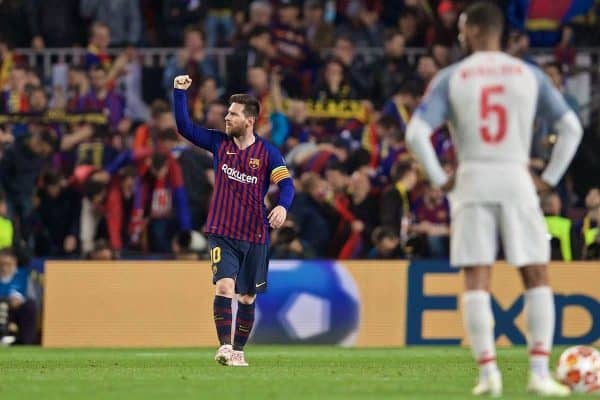 “He’s a world-class player. The second goal was probably not the nicest in the career of Lionel Messi but it shows his skills, that he is even there in that moment.

“I knew before that Lionel was a world-class player and now I saw it again I am not too surprised to be honest.”

The task awaiting Liverpool next week is monumental as without an away goal they cannot afford to concede again, which is easier said than done against a team which has Messi and Suarez in it.

But Klopp refuses to give up hope.

“Because it is football yes but before this game we had a bigger chance let me say it like this,” he said.

“It is difficult because it is Barcelona and they can play for counter attack- which doesn’t help us a lot.

“Because it is football we should still try but it didn’t make our life easier.”

Unlike his Liverpool counterpart Barcelona coach Ernesto Valverde said Messi, who won 15 of 24 tackles, continues to astound him.

“Messi always surprises you. I don’t know how he does it,” he said.

“He also does it in times when we need it. We also gained some breathing room with his runs to their penalty area when we needed it.

“We had to suffer to keep a clean sheet. They are a great team: there are still 90 minutes left and we know what awaits us.

“Last year we were eliminated in the quarter-finals [against Roma] having had a three-goal advantage so the tie is totally open and Liverpool will make it difficult for us.”