Klopp’s Reds wrapped up their campaign with a ninth successive win—a comfortable 2-0 home defeat of Wolves—but it was still not enough to supplant City at the top of the table.

By winning their final fixture at Brighton, Pep Guardiola’s imperious City climbed to 98 points and rendered the Liverpool result academic.

Klopp said: “Congratulations to Manchester City. They had an incredible season. We did as well but they won it.

“We had an unbelievable season. I can read all the numbers. It would be nice to get an award for the biggest development I can remember—we made a big step.

“Everybody knows we will go again but if you really want something, you feel the disappointment as well. That is what we feel.

“But I am not worried that this is as good as it can be. As long as Manchester City are around with their financial power, no team will pass them easily.

“We need to be very close to perfection to win the Premier League as long as this is the case. There is more to come from us. If we are ready to make the next step, we will. That is the plan.”

For 21 minutes Liverpool actually went top on the live league table after Sadio Mane opened the scoring in the 17th minute. Celebrations then broke out around Anfield when it emerged that Brighton had scored against City, and there were another couple of false alarms as fake rumours of further goals spread.

All that was quelled as City roared back to win 4-1 at the Amex Stadium and Klopp admitted the atmosphere had been strange.

He said: “It is difficult to prepare a team for a situation like that—we score and Brighton score, stay calm. It was a boost to a very good atmosphere, going nuts.

“One-nil Brighton opened the door for them. Then it calmed down. It was clear when the atmosphere was not ecstatic any more something had happened we didn’t like at Brighton.

“Very difficult circumstances but we won 2-0 against a very strong Wolves side. That is impressive. Really good.”

Mane wrapped up the victory with his second goal after 81 minutes.

Liverpool’s season is not yet over, as they can still finish on a high by winning the Champions League.

Klopp said: “We have qualified for the Champions League final. That is special. This team is one of the best that ever played for Liverpool—100 per cent.

“But we play in a league with other very good teams. We accept that, no problem. We will go again but give me a few hours to get over that.” 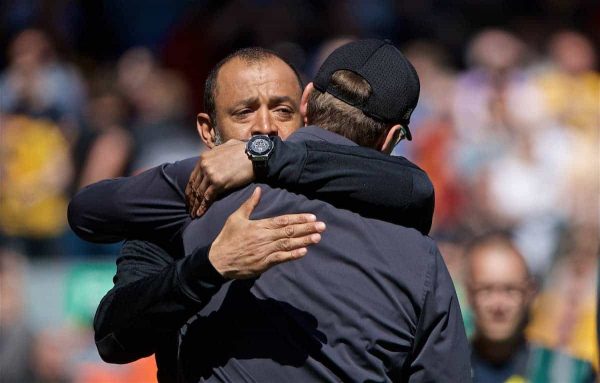 Wolves boss Nuno Espirito Santo, whose post-match press conference began with just one reporter seated as Liverpool held their lap of honour, paid tribute to the Reds and City.

He said: “This title race between City and Liverpool was amazing for the competition and everyone who loves the game. The jobs of both managers and both clubs was amazing.”

Espirito Santo also praised his own side, who have finished seventh in their first season back in the top flight.

He said: “We are very proud of what we achieved and especially proud because of how we did it. The belief of the boys is what makes this possible.

“What we have achieved is thanks to hard work and commitment of the boys but we want to go again. Let’s enjoy it and appreciate it but work on it to improve and get stronger.”