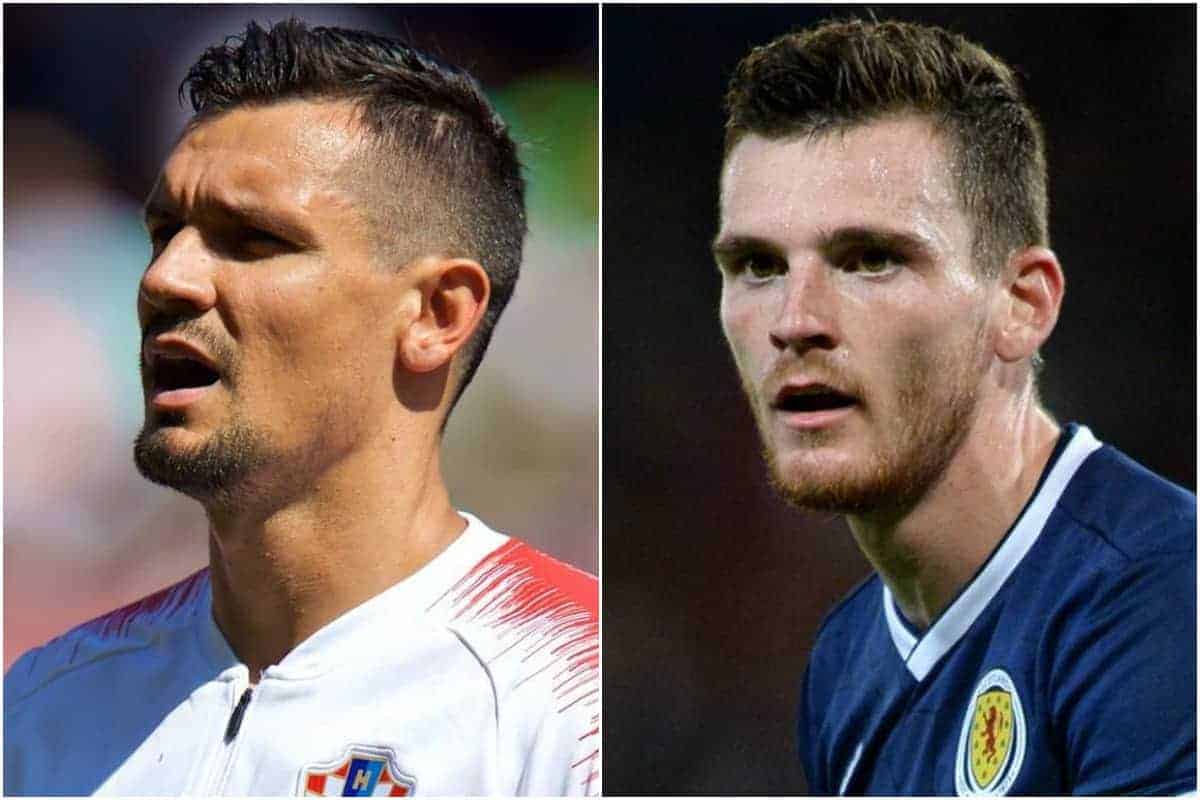 Dejan Lovren, Andy Robertson and Roberto Firmino were among the Liverpool players in action as the September international break continued on Friday.

Besides Virgil van Dijk and Gini Wijnaldum‘s historic win over Germany with the Netherlands, 15 other Reds were on duty with their national teams heading into the weekend.

Lovren made his first appearance of the season, after sitting out of Liverpool’s first five games of the campaign due to speculation over his future, as Croatia won 4-0 at Slovakia.

The 30-year-old played the full 90 minutes in a comprehensive victory in Trnava, and added to goals from Nikola Vlasic, Ivan Perisic and Bruno Petkovic with a diving header in the 89th minute.

After full-time, Lovren took to Instagram to proclaim that he is “finally happy,” with Croatia top of Group E after four games in their bid to reach Euro 2020.

Less positive, however, was Robertson, who cut a frustrated figure in his post-match interview with Sky Sports after Scotland’s 2-1 loss to Russia.

John McGinn opened the scoring early, but Artem Dzyuba’s strike on 40 minutes and a second-half own goal from Stephen O’Donnell left their captain fuming.

“There’s frustration, annoyance, everything that goes along with it,” Robertson, who played the full 90 minutes at left-back, said.

“You can feel it from the stands and we’ve only got ourselves to blame for that, they’ve got every right. It wasn’t good enough.

“First 15 minutes I thought we were good, got the goal and it was as if it scared us, I’ve never seen anything like that before.

“That needs to change, if we go into a lead it should be a positive not a negative.

“I’m annoyed with everything. My performance, what the rest of the lads done, all of us except David Marshall really.

“To have 10 players from the start not really showing up and putting in the performances we can is never going to win you a game of football.”

Elsewhere, Divock Origi started and played 55 minutes as Belgium sealed a 4-0 win over San Marino, although three of their goals—including one from replacement Dries Mertens—came after he exited the field.

Firmino played 83 minutes as Brazil drew 2-2 with Colombia in a friendly clash in Florida, with Casemiro and Neymar scoring in a game that saw Fabinho remain an unused substitute.

Harry Wilson started in a difficult 2-1 victory for Wales at home to Azerbaijan, with the on-loan Bournemouth winger lasting 63 minutes before being replaced by Jonny Williams, as Gareth Bale went on to score a late winner.

Ben Woodburn was not named among the substitutes at the Cardiff City Stadium.

There was a first clean sheet of the season for Kamil Grabara as the Poland under-21s won 1-0 away to Latvia, while Rhian Brewster came off the bench for his England under-21s debut in a 3-2 win against Turkey.

Caoimhin Kelleher showed he is learning from Alisson as his well-weighted pass out wide helped the Republic of Ireland under-21s to set up their only goal in a 1-0 victory at home to Armenia.

Troy Parrott nets on his debut from close range, following Aaron Connolly's brilliant run and cross down the left flank.

Layton Stewart played 79 minutes and was central to the England under-18s’ 3-2 win over Australia in Leicester, laying on Alex Mighten’s hat-trick goal in a fine display up front.

Harvey Elliott and Jarell Quansah started in the England under-17s’ 5-0 thrashing of Finland to kick off the Syrenka Cup in Poland, with James Norris among the substitutes.

Sepp van den Berg was an unused substitute as the Netherlands under-19s drew 2-2 with Italy, while Morgan Boyes and Neco Williams both started as the Wales under-19s held Denmark to a 3-3 draw, eventually losing 8-7 on penalties.

Saturday is set to be a quieter day for Liverpool’s internationals, though England take on Bulgaria at Wembley with Jordan Henderson expected to start.

Ki-Jana Hoever could feature as the Netherlands under-18s take on the United States, while Dal Varesanovic should start as the Bosnia & Herzegovina under-19s host Albania.