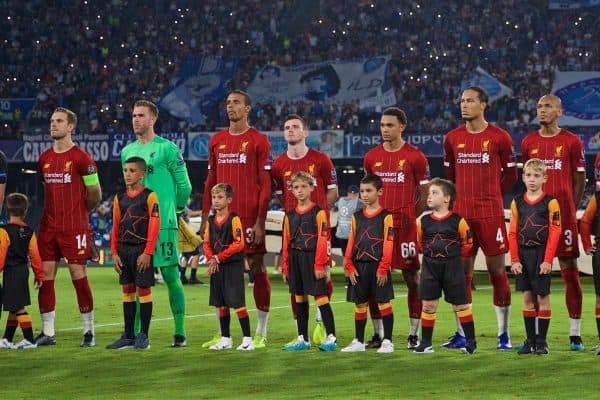 Liverpool host Salzburg in the Champions League on Wednesday night, as the Reds host their first European night at Anfield since becoming champions.

Jurgen Klopp‘s side cleared one of their toughest hurdles of 2019/20 to date on Saturday, edging past Sheffield United at Bramall Lane.

The victory further highlighted the winning mentality that has been created at the club and that will need to be on show on Wednesday.

The Reds welcome a dangerous Salzburg side to Anfield—a team whose quality saw them destroy Genk 6-2 in the opening batch of Group E fixtures.

Anfield should be bouncing, however, as the supporters watch the Champions League winners at home in Europe for the first time since that legendary night against Barcelona.

Salzburg’s aesthetically pleasing style could make for an entertaining contest, as Klopp’s men look to announce themselves in the competition this season.

Alisson is still on the comeback trail from a calf injury, with the Brazilian not expected to be back until after this month’s international break.

Meanwhile, Nathaniel Clyne is a long-term absentee, man-of-the-moment Joel Matip is unavailable due to a knock and Xherdan Shaqiri is also out.

With in-form Leicester to come at Anfield on Saturday afternoon, Klopp may consider a few changes, but a strong starting lineup is required.

Joe Gomez will likely fill in at centre-back in place of Matip, although Dejan Lovren is also in contention.

James Milner may come into the midfield, although a poor display in Naples showed his Champions League limitations.

Naby Keita is back after missing the Sheffield United game, so both he and Alex Oxlade-Chamberlain could also start.

Mohamed Salah, Sadio Mane and Roberto Firmino are expected to play, with the No. 10 set to take on his former club.

In-demand Salzburg youngster Erling Braut Haaland is struggling with illness, while Antoine Bernede and Alexander Walke are definitely out.

Marin Pongracic and Hee-Chan Hwang could return, though.

Remarkably, Klopp has never lost in a home European match as Liverpool manager—a total of 19 games across two competitions.

It all started with a 1-1 Europa League draw with Rubin Kazan just weeks after the German took charge in October 2015, before wins over Bordeaux, Augsburg, Man United, Borussia Dortmund and Villarreal that season.

After a year away from European football, Liverpool returned to Champions League action with victory of Hoffenheim in the playoffs, before drawing 2-2 with Sevilla.

Maribor and Spartak Moscow were swatted aside in the group stage and the Reds then went undefeated in home clashes with Porto, Man City and Roma, the latter two of which were stunning wins.

Then last season, PSG, Red Star Belgrade and Napoli were all beaten at Anfield, while Bayern Munich, Porto and Barcelona also failed to win there in the knockout rounds.

Speaking to the press on Tuesday, Klopp predicted a tough clash against Liverpool’s “younger brothers”:

“[Salzburg] will defend with all they have, they have waited so long for the Champions League.

“I think they got kicked out nine or 10 times in the last qualifying round.

“They are the serial champions of Austria but then couldn’t make it but were quite impressive in the last two years in the Europa League.

“So, it will be interesting and people should not be surprised if we have to work really, really hard. We need everybody, we really need everybody.”

Ben Twelves is in charge of This is Anfield’s matchday liveblog, keeping you entertained from 7.15pm.