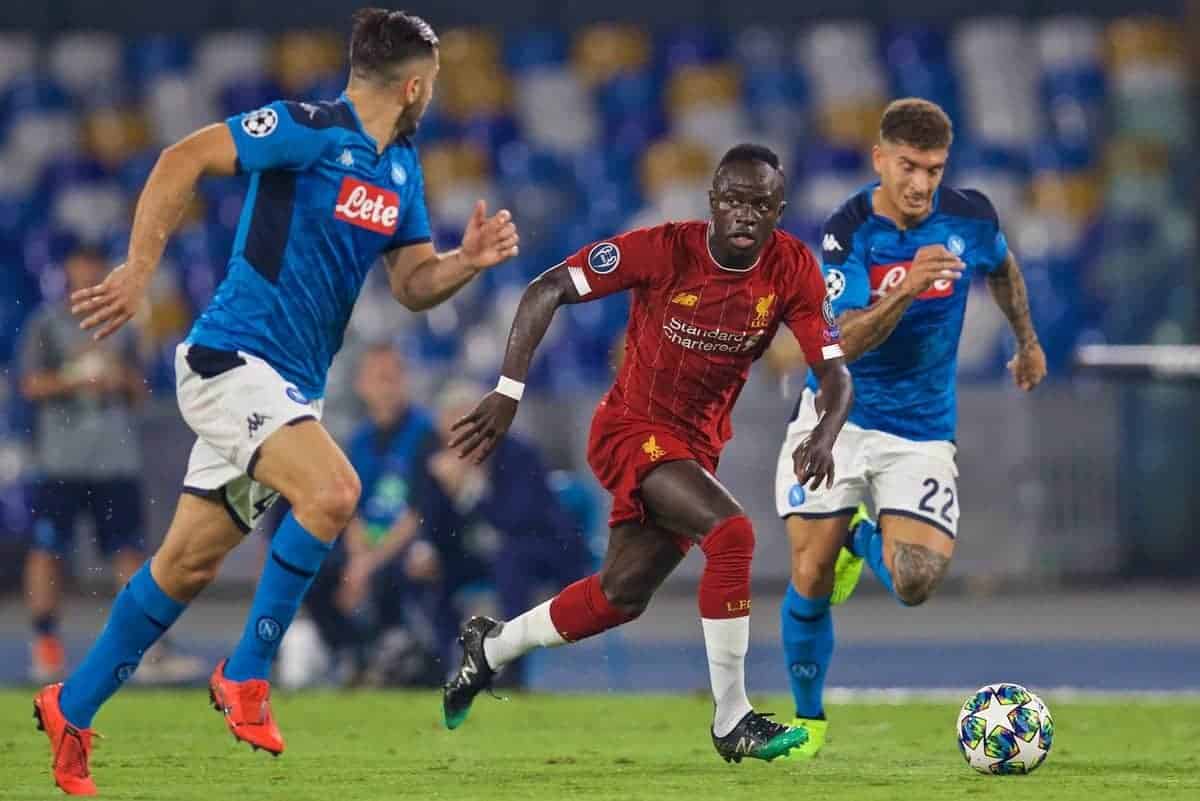 Liverpool welcome Napoli to Anfield in the knowledge that a win will secure their place in the knockout stages of the Champions League.

As they have done so often already this season, Liverpool left it late to secure all three points at Crystal Palace having been pegged back to level terms in the dying stages.

It was yet another example of the perseverance and never-say-die attitude pulsing through Jurgen Klopp’s Reds as Roberto Firmino was the man to steer the team to their 12th win in 13 league games.

And now Liverpool return to Anfield with another boost of confidence as they set their sights on securing their place in the last 16 of the Champions League, with Napoli the visitors.

With nine points to their name after four games and a five point advantage over third-placed Salzburg, Liverpool can qualify top of the group with a game to spare with victory on Wednesday.

A further three points would enable Liverpool to make the trip to Salzburg on December 10 with the opportunity to rotate the squad at the most congested period of the year, with 12 games to be played in 36 days between November 27 and January 2.

Napoli, however, have inflicted Liverpool’s only defeat in all competitions so far this season in the reverse fixture in September, having struck twice in the last ten minutes – where they currently sit second in Group E needing a similar outcome to qualify early.

But while the Reds went on to win 12 of their next 13 games, Carlo Ancelotti’s men have had a tumultuous time both on and off the field.

A civil war between the players and club president Aurelio De Laurentiis has caused chaos off the field, while performances on it have simultaneously suffered as the Italian outfit have failed to win in their last six matches – their worst run since March 2013.

While results would suggest Napoli are there for the taking, Klopp and Co. know all too well the danger they can pose – but under the lights at Anfield, Liverpool should have the advantage. 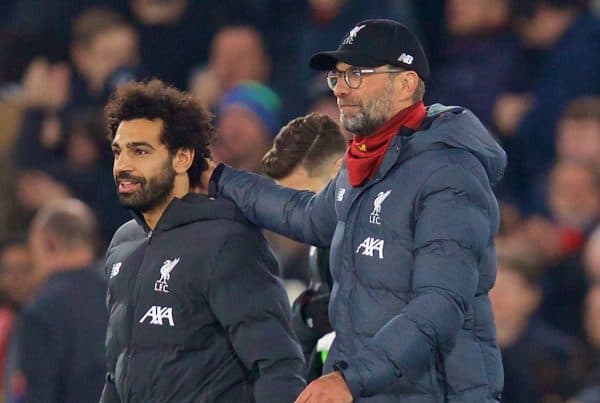 The Reds emerged from the win over Crystal Palace unscathed in terms of new injuries, but remain vigilant over the condition of Mohamed Salah and Andy Robertson.

The pair are both managing ankle injuries, where Salah was an unused substitute at Selhurst Park while the left-back conceded he played through the pain barrier for the duration of the 90 minutes.

They have been on restrictive duty in training in recent weeks, with the manager revealing that the Egyptian only trained at “100 percent” capacity the day before the game, where he is now expected to return to the starting lineup at Anfield.

Salah’s return alongside Sadio Mane and Roberto Firmino would mean Alex Oxlade-Chamberlain returns to the substitute bench, with Fabinho, Jordan Henderson and Gini Wijnaldum all likely to get the nod in the middle of the park.

The Brazilian is set to miss the Premier League clash with Brighton on Saturday after receiving a one match suspension having reached his yellow card threshold, which would then pave the way for Oxlade-Chamberlain, James Milner and Naby Keita to return to the fold.

With a victory ensuring Liverpool will be afforded the opportunity to rotate later down the line, Klopp is likely to field a full-strength side.

The Scot, Alisson, Trent Alexander-Arnold and Virgil van Dijk will be named in the starting XI, with only Dejan Lovren potentially dropping out for Joe Gomez – who has started two of the last three games in Europe.

Moreover, Xherdan Shaqiri is still looking to build up his match fitness after two months out of action with a calf injury, while Joel Matip (knee) remains on the sidelines.

Napoli, meanwhile, have named a 20-man travelling squad and are without captain Lorenzo Insigne (elbow) and fellow forward Arkadiusz Milik.

Last 5 against Napoli (All Competitions) 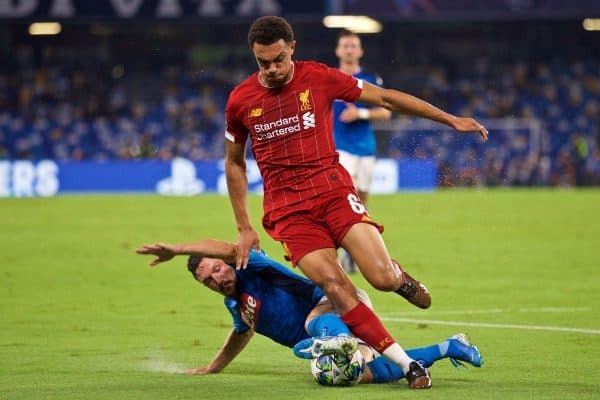 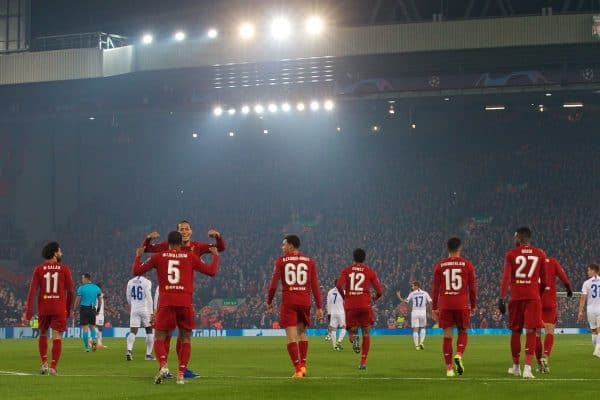 In the last four meetings between the two teams, the home side has emerged as victors in each game – a record which makes for good reading for the Reds as they look to secure qualification.

Not to mention the fact that Liverpool’s most recent win over Genk earlier in the month stretched the Reds’ unbeaten streak in European competition at Anfield to 24, with 18 wins and only six draws – with the last defeat coming against Real Madrid, in October 2014.

Wijnaldum has been a key contributor to such feats in recent times, where three of his last four goals for the club have come in the Champions League, with his double against Barcelona setting the Reds up for their sixth European Cup before his most recent effort to open the scoring against Genk.

Speaking in his pre-match press conference, the boss stressed that the Reds are preparing for “a sensationally good football team” as he urged both the fans and players to make Anfield a cauldron:

“Tomorrow night, of course, we try to win, it would be massive for us for different reasons. We don’t feel like we are already halfway through the group.

“They are a very dangerous opponent, very strong. They won last year against us at Napoli when we were really bad and this year when we were not bad but not good enough to win the game.

“They gave us a proper fight at Anfield [last season] and that’s what they will do tomorrow night.

“They are a sensationally good football team, they didn’t have the results in the last couple of weeks like many expected.

“We have to make sure from the first second this is a different place tomorrow night. We want to go as far as possible in the Champions League.” 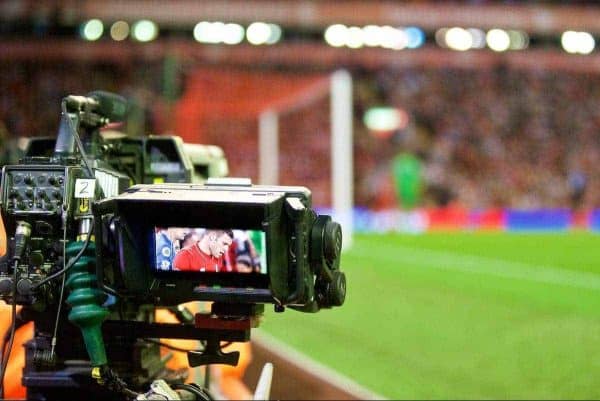 Liverpool’s return under the lights at Anfield against Napoli is live on BT Sport 2 from 7pm (GMT), with kickoff set for 8pm.

Ben Twelves will be the one to keep you entertained and up to date on all the action on This Is Anfield’s matchday liveblog, starting from 7.15pm.