Liverpool put in a performance which is becoming familiar, not outstanding, but still managing to get the job done, putting Genk to bed with a 2-1 win. 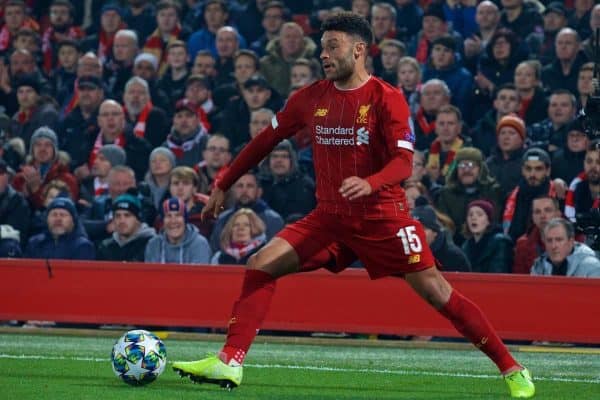 When the lineups were released it looked like both sides had gone for formations they don’t usually play, and there could have been a number of options for Liverpool given the personnel selected.

It soon became apparent the Klopp had sent his side up in a 4-4-2 diamond with Alex Oxlade-Chamberlain playing a key role in setting the shape.

The Englishman’s role wasn’t too different from the one in which Roberto Firmino usually operates.

He dropped deep into midfield to help build the play when required but was also regularly seen in the front line between Mohamed Salah, who was playing his usual role from the right, and Origi on the left.

Oxlade’s tendency to stay deeper for longer than Firmino usually does allowed Naby Keita and Georginio Wijnaldum more freedom than they might normally have, as demonstrated by the Dutchman’s position for the opening goal.

The 26-year-old revels in a central role, and even more so when he has the free rein of a No. 10. Rather than being a rotation option out wide, he showed he is much more suited to being a Firmino alternative.

After a couple of promising moments, he eventually got his name on the scoresheet with the type of goal which is becoming his trademark.

All Eyes On City

All the talk was of a rotated lineup, but it would have been more of a surprise if Liverpool didn’t make changes in midweek ahead of massive Premier League game on Sunday.

Firmino, Sadio Mane and Andy Robertson all sat most of the game out, and will be definite starters against Man City if fit.

But as well as the changed lineup, it felt like the crowd had their minds elsewhere too.

On a night when fans Klopp’s former side, Dortmund, celebrated 20 years of their Desperados ultras group, Anfield was geared up for nothing more than a routine victory, saving their own fireworks for what they hope will be success later in the competition.

Trent Alexander-Arnold just about got a toe to a dangerous cross, but Genk scored from the resulting corner when Mbwana Samatta evaded Liverpool’s marking.

Just 3 clean sheets in 19 games for Liverpool in all competitions this season. None at home. #LIVGEN

Genk were unlucky to be called offside by the linesman on a couple of occasions when VAR might have had a different opinion.

And the high line isn’t necessarily the problem, as more often than not the offside trap works, but Liverpool might not always score more than one goal, so the confidence they can keep clean sheets needs to return.

Speaking to BT Sport post-match, Klopp said: “It’s not really a worry, but it’s of course not what we want. The goals we conceded recently are all different. It’s not about defending it’s about being 100% spot-on in the situations. We have to work on that.” 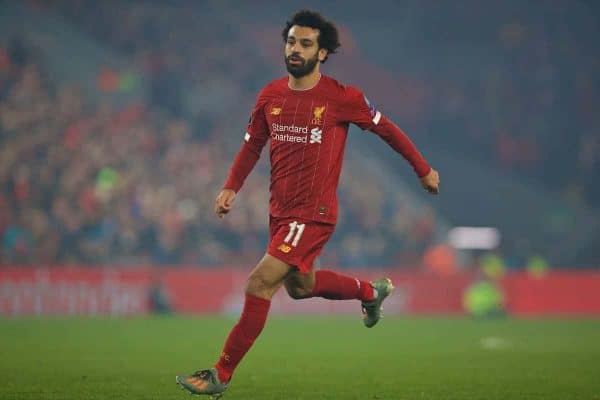 There were some glimpses at the start of the second half of Liverpool at the peak of their attacking powers.

All they were missing were a few more sweet strikes of the type Oxlade-Chamberlain provided to give Liverpool the lead.

A goal from the feet of Salah would have been nice, but as he let the ball run through him to Wijnaldum during one intricate move, and later played a really nice through-ball past the entire Genk defence, he showed that despite the lack of goals those attacking instincts are still there.

He was presented with a number of chances which came to nothing though, and this usually happens once he has his mind on working space for a shot on goal, rather than his contributions to the buildup which are still good.

The Egyptian played the full 90 minutes at Anfield, which shows that the ankle injury isn’t troubling him as much as it has been recently, and he is ready to take on City.

Sunday’s game would be the ideal time for him to return to form.

Liverpool are used to topping tables at the moment, having raced to a six-point lead at the top of the Premier League.

Napoli’s draw with Salzburg did the Reds a favour, and they now top their Champions League group too, for the first time this season.

Staying atop it will be difficult, but Napoli will be easier at Anfield than they were at the San Paolo, and being more familiar with the Austrian side, having already played them, might help Liverpool in their tough trip to Salzburg in December.

The group is still tight, but it’s looking like the two favourites will qualify, but Klopp will hope his side do so as group winners, making for slightly easier ties next year when they hope to be challenging on multiple fronts.