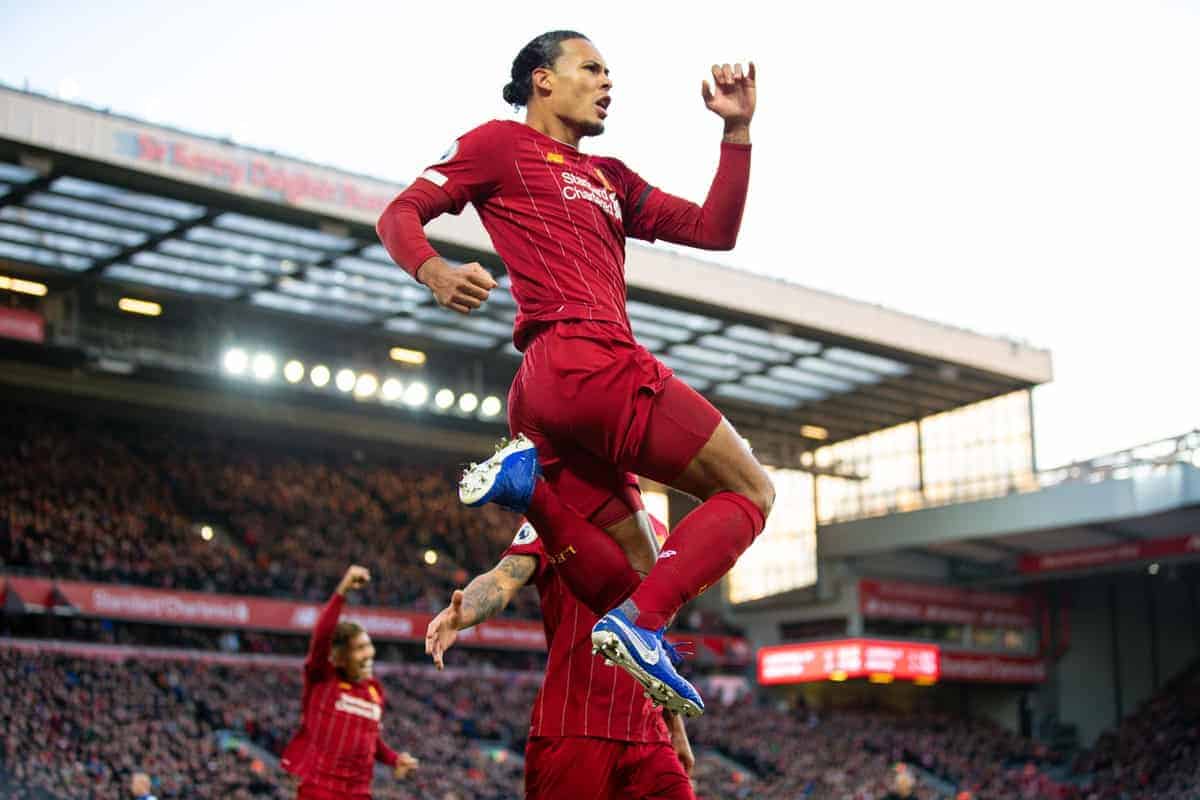 There were two clear standouts as Liverpool fought for a shaky 2-1 win at home to Brighton, while Alisson was criticised for his late red card.

The Reds strolled to a strong lead early on as Virgil van Dijk beat Mat Ryan twice with expert headers, both coming through Trent Alexander-Arnold deliveries.

But despite an excellent early showing that seemed to set the hosts on their way to another fine win, the endeavour of Brighton and a rare lapse from Alisson upset the order.

Adrian wasn’t even warm by the time Martin Atkinson prematurely blew his whistle and Lewis Dunk passed in a cheeky free-kick, which set in motion a late onslaught that, fortunately, Liverpool weathered.

The victory—albeit another ugly one—pushed the Reds 11 points clear at the top of the Premier League ahead of Leicester‘s clash with Everton on Sunday.

Here we compare our player ratings with those from the Liverpool Echo, the Mirror, the Independent, ESPN, FotMob and the TIA readers. 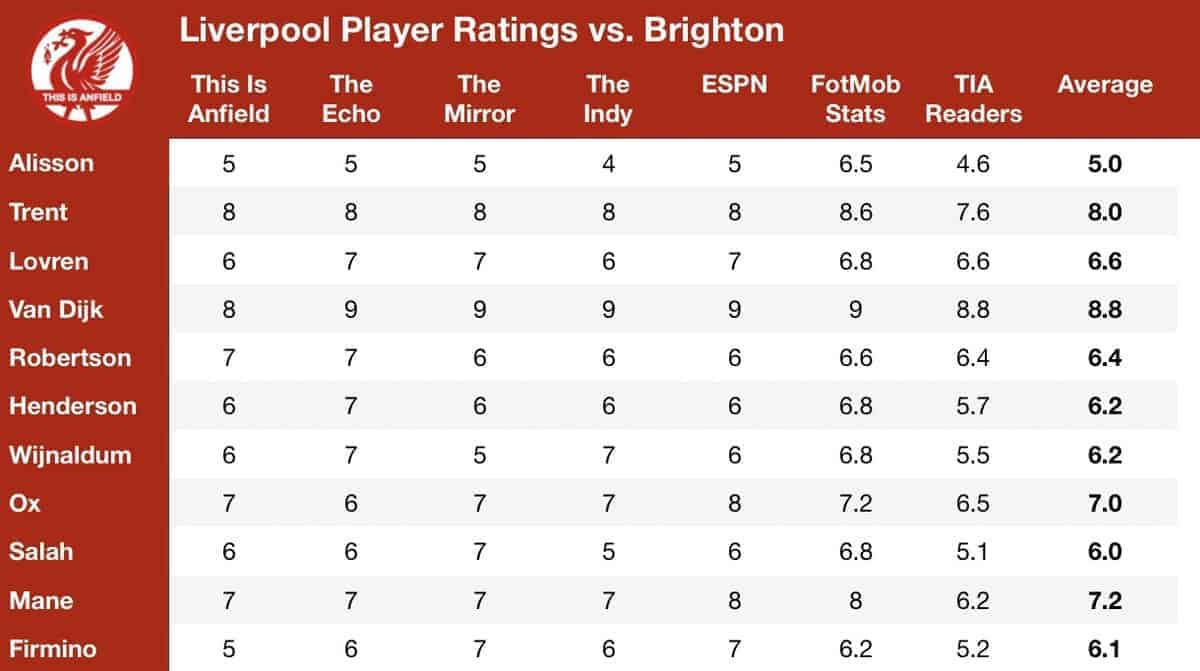 With two goals and an outstanding contribution in defence, Van Dijk (8.8) deservedly averaged the highest rating from Jurgen Klopp‘s starting side.

ESPN’s Liam Wheeler deemed the Dutchman as Man of the Match, and praised him as “a rock at the back again” who “sprayed the ball around like Kevin De Bruyne.”

“Bored of being the best defender in the world,” the Mirror‘s Alex Smith suggested, “[he decided] to do a Cristiano Ronaldo impression in front of goal.”

The creator of Van Dijk’s headed brace, Alexander-Arnold (8.0) was rated similarly high, and Wheeler hailed him for “brilliant attacking display” while Smith joked “that right foot is such a wand it should be shipped off to Hogwarts.”

A harsh 6.2 rating from the This Is Anfield readers let the average down for Sadio Mane (7.2), but he was still considered the Reds’ third-best performer.

Alex Oxlade-Chamberlain (7.0) was the most impressive of Klopp’s midfield trio, and though the Liverpool Echo‘s Ian Doyle argued that he “drifted in and out” he will hope to keep his place next time out. 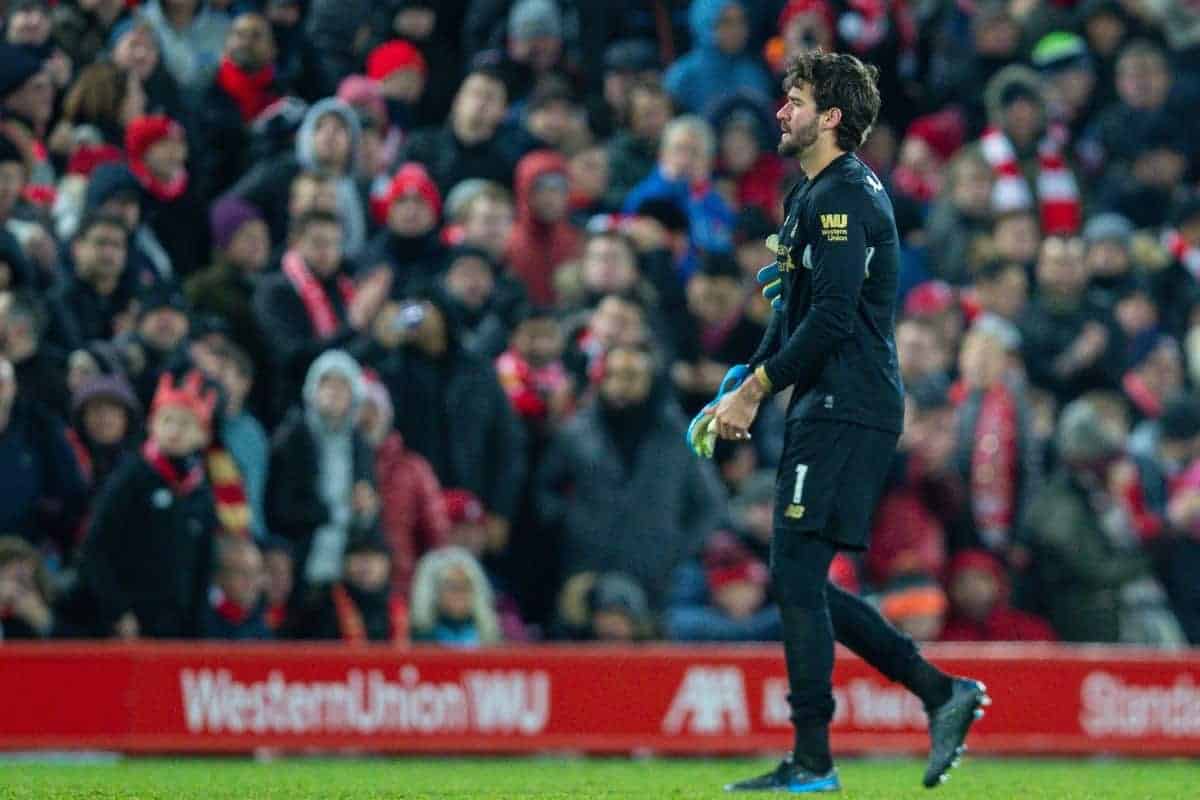 That comes in the same stadium, with Everton the visitors on Wednesday night for a Merseyside derby in which the Reds will be without Alisson (5.0), who was the lowest-rated player against Brighton.

“What on earth was he doing with the red card?” asked Doyle, while Wheeler lamented a “moment of madness” which will see Adrian start in midweek.

It is another demanding stage for the Spaniard, who would not have expected another outing until perhaps the Club World Cup, but he has previous with stepping up when needed.