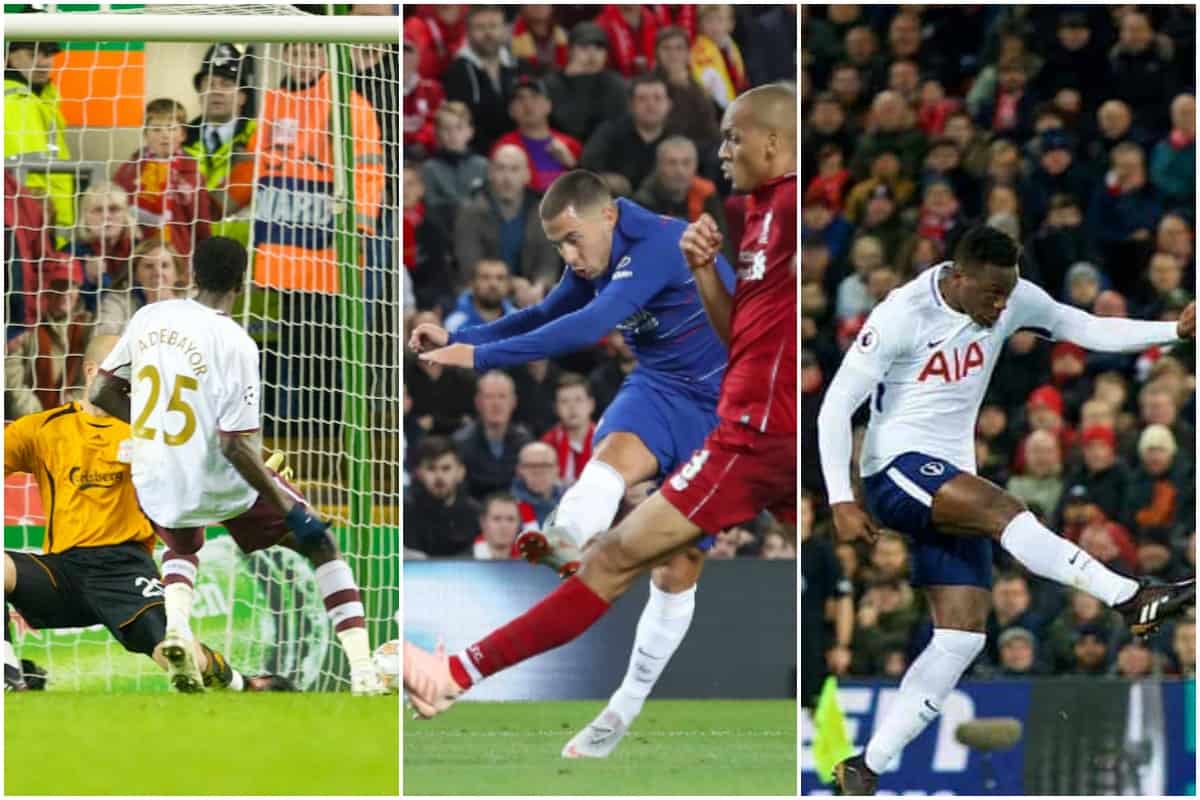 Let’s face it: we never want to see teams score against Liverpool at Anfield, but every now and then someone manages an effort of such extraordinary talent or beauty that even Kopites must simply sit back and applaud.

This is the first instalment of a mini-series looking at how Liverpool fans can, and do, appreciate the quality in front of them even when it’s not from those in Red.

You know the story, you know how it goes. A rubbish goalkeeper, 50 conceded all season, comes to Anfield and suddenly plays a blinder.

Best game of his life, man of the match, the whole lot. Frustratingly, the Reds are held 0-0. It has happened again and again—and at the other end of the pitch, the same holds true.

Some of the best goals against Liverpool on our own hallowed turf have come from the boots of those who usually see their efforts end up closer to the top row of the Kop than the top corner—yet now and again, that’s precisely where they find.

This first piece holds a good few of such memorable, and entirely unique, strikes from those players…as well as a fair few absolute worldies from players who are rather more used to post-goal celebrations.

We’ve gone for 10 of the best in the end—plus a batch of honourable mentions, as there were so many great strikes to recall.

Amr Zaki – Wigan – Great technique on a side-on bicycle kick from the man in our picture, sent back across goal into the far corner.

Cameron Jerome – Birmingham City – Decided to transform into Gabriel Batistuta for a minute to take a ball out the sky, hold off Mascherano and smash one in from about 35 yards.

Marek Matejovsky – Reading – Free-kick worked to the Czech midfielder on the edge of the box and he absolutely belts one in off the bar.

Kevin Sheedy – Everton – Another set-piece, this one simply unleashed from the bowels of hell into the top bins. And an unsavoury V-sign to the Kop, too!

Into the real deal we go with a ‘favourite’, for want of a better word, of many fans who could appreciate the finesse and power of this hit.

He will never hit one better than this: first time, loads of swerve, top corner, Kop end. We should all be so lucky.

Not the last free-kick we’ll see in this series, but maybe the hardest-hit one.

French winger Robert was a total maverick, a class act on his day who could also be a petulant, problematic dressing room wrecking ball, but if you let him wind one up from range, the chances were either the net was getting torn off or someone in the stands was getting a concussion.

On this occasion at Anfield, it was definitely the former as he sent in a howitzer from range—but a Bruno Cheyrou brace won the cup match for the Reds, bizarrely.

Saint-Etienne: one of the most evocative, memorable nights associated with Liverpool FC, particularly for supporters of a particular generation. This was the 1970’s version of Olympiacos, of Barcelona.

But their goal was the corker. Bathenay surged forward past the halfway line, found himself some space and utterly tonked one from miles out, beating Clemence in goal with power and swerve.

Scroll to 5:35 in the video above for the screamer…or just watch all nine minutes to relive one of Anfield’s most dramatic nights of all time.

Another from yesteryear, another spectacular hit from a Spurs player more noted for other attributes than shooting.

Nayim scored an average of three league goals a season across his six years at Tottenham; this was the best of the lot (though he did hit a long-range stunner at his next team, Real Zaragoza, in the UEFA Cup final).

The video shows a few other decent Spurs goals against the Reds, too, but Nayim’s is first up.

Slightly different this time in that the scorer is not the focus of the ‘great’ about this goal.

Champions League here, and a back-and-forth encounter with Arsenal, and a young whippersnapper by the name of Theo Walcott came off the bench to out-run every tired pair of Liverpool legs and provide a tap-in for his team-mate.

Good news spoiler: we still went on to win!

What were we saying about players who hit a ball at Anfield better than they ever have done in their entire career?

Goals in the last five years since the season he scored this one in? Four.

Gonna be kind here and give you all three to watch, because they were all brilliant.

This one is one of the finest team goals scored against the Reds, at a time when this Arsenal side was one of the best around. The Pires-Henry-inspired attack was superb, but it was backed up by Patrick Vieira in midfield.

The French powerhouse scored the goal with a brilliant clipped finish after also being involved in the quick passing movement which breached the defence in the first place.

Then it was Mellor time!

Two we could have picked for Eden Hazard in truth, but we’ll opt for his League Cup winner from 18 months ago.

He slalomed through a few challenges and rocketed in a finish to make it one of the best individual efforts—and he did similar, from the opposite side of the penalty box, in the Premier League a couple of years earlier.

Yet another derby goal that we had to applaud our neighbours for.

Graeme Sharp was at it this time, taking a good first touch on a long pass before sending a looping half-volley over the keeper and in to send slightly-less-than-half the city wild.

This one won goal of the season and consigned us to defeat.

Finally, perhaps the best-hit goal of all time by an opposing player at Anfield.

Step forward, Erik Edman: the very definition of the phrase “he’ll never score another as good as that.”

This absolute pelter, hit from just over 40 yards out into the top corner, was his first goal for Spurs…and his last.

He hadn’t scored a league goal for three years before netting this one…and in a further eight years until he retired, he never scored another goal again!