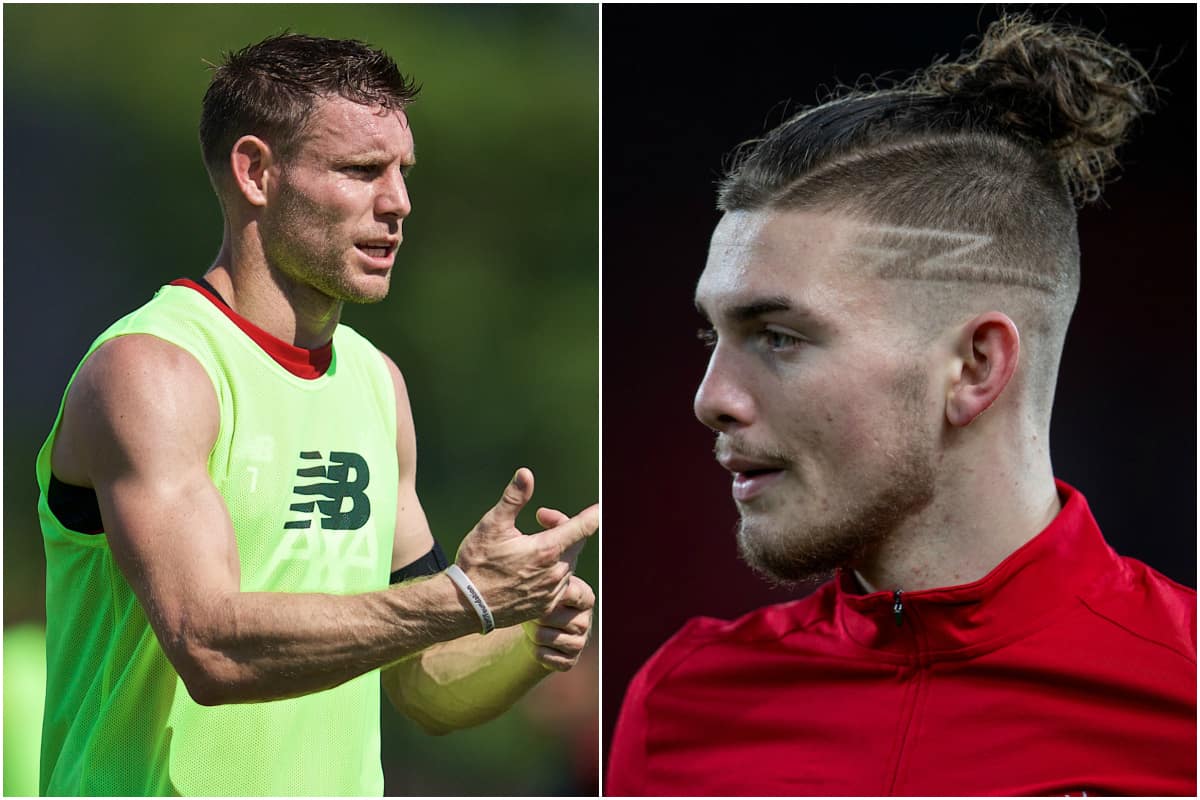 Harvey Elliott has paid tribute to James Milner for his support in adjusting to life at Liverpool, with the vice-captain and Adam Lallana his biggest role models.

Milner is the most experienced player in the Reds’ squad, and beyond his performances on the pitch this was one of the deciding factors in the club handing him a new long-term contract.

His longevity is remarkable considering he broke through at Leeds as a 16-year-old, making his Premier League debut 66 days before his 17th birthday—at that point becoming the second-youngest debutant in the English top flight.

Elliott now holds the record as the youngest-ever, having made his first league outing for Fulham 30 days after turning 16, paving the way for his move to Liverpool.

After captivating Jurgen Klopp and Pepijn Lijnders in his first training session at Melwood, the teenager has remained part of the first-team squad, and working with the likes of Milner and Lallana has set a big example.

“I look at two people: Milly and Adz,” he told Lijnders in an interview for LFCTV.

“I think those two, their work ethic in training, outside of training in the gym, it’s just always bang on.

“They’re so professional, and to be fair all the team is, but those two are always in the gym an hour-and-a-half before training, always doing a bit extra.”

Lijnders revealed: “I always ask Milly—by the way, he thinks very highly of you—and he says ‘he needs to play’.

“He spoke about a few other players at different clubs, young and the coaches really like them, but they don’t play them.”

A clear example of this would be Phil Foden at Man City who, despite Pep Guardiola regularly praising the 19-year-old, has started just 11 senior games this season—three in the league.

Foden’s pathway at City is regularly blocked by big-money signings for the first team, but at Liverpool, Elliott has explained how Milner is helping cultivate a hunger within the club’s youngsters.

“Milly is a big aspect of the team, not just for the first-team players, but even for us coming up,” he continued.

“When he’s played in the League Cup games, we all turn and look at him and think ‘wow, we’re playing alongside him’.

“So I think to have him around us young players is good, because we learn so much from him.

It is no surprise to hear how invaluable Milner is proving in Elliott’s first season on Merseyside, with the 34-year-old’s qualities as a leader helping Klopp usher in a new generation.

Whether he intends to or not remains to be seen, but it would be no surprise to see him take the step into coaching once his playing career draws to a close—and hopefully that will be at Liverpool.

If so, he could continue to aid Elliott in his progress, with the No. 67 setting lofty goals as he aims to emulate Steven Gerrard.

“To win everything, obviously with this club,” he said when Lijnders asked what his targets were.

“I strive to be like a Steven Gerrard, I just want to be as big of a legend as him and win the Premier League, Champions League with this amazing club.

“For me, that’s what I strive towards, and I want to help the club in every way possible to accomplish these things.”