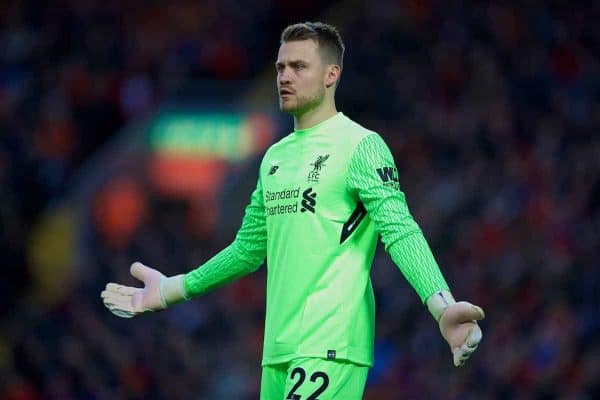 Simon Mignolet has discussed his feelings on winning the Belgian First Division A title with Club Brugge, and how Liverpool deserve their own trophy “as soon as possible.”

Mignolet left the Reds last summer after seven years with the club, having definitively lost his place in the side to Alisson, ending a long and frustrating spell.

He could have stayed on Merseyside as No. 2, but opted to depart in pursuit of regular first-team football, and he has achieved that with Club Brugge, having played 43 times this season.

But there is no football for Mignolet at this stage, let alone regular football, as the campaign has been curtailed in Belgium, with his side crowned champions after 29 league games.

On Sunday, Mignolet shared a photo of himself with the Belgian First Division A title, and in an interview with the Times reflected on the feeling of winning it early, without fans.

“We got a text message [saying we were champions]. You can’t really do too much. I drank a glass of champagne with the family and that was it basically,” he revealed.

“The only difference is that you obviously want to celebrate it on a pitch after a victory and celebrate with your team-mates, the fans, the staff and the club.

“But we have to accept what time we are in at this moment and that isn’t possible. For me that is more the downside.

“It was well deserved because we were miles ahead of the rest.

“We had basically played against every team twice apart from one and, after that, we had so many points that we were clear and were going to be champions one way or another.”

Many parallels can be drawn between Mignolet’s current club and the one he left in 2019, as Liverpool are runaway champions in the Premier League, with a 25-point lead as it stands.

They have nine games left to play, with only six points required to confirm the title, but there is no date set for when the campaign will resume—though it is unlikely the Reds will find themselves in the same situation as Club Brugge.

The Premier League are committed to fulfilling the rest of the fixture list when safe, which leaves Liverpool, in Mignolet’s words, in “limbo” over a title they “deserve.”

“In the Premier League, things can twist and change at the end of the season but with the advantage they have got I don’t see anyone being champion other than my old team-mates,” he insisted.

“I am not surprised with how well they have done. The basis was already set, the team was already formed and the performances were there also just before I left.

“I think everybody expected them to challenge at the top of the league and they have outperformed the rest of the teams. That would make them well-deserved champions.

“They are more waiting and seeing what is going to happen to them. They are in limbo as well.

“I hope one way, or another, they will be crowned as soon as possible the Premier League winners of this season.”

The notion of Liverpool being deemed champions “one way or another” implies that Mignolet feels it may be best for England to follow Belgium’s lead in cutting the season short.

But despite the inability to celebrate with fans, that would be hugely disappointing, as the resumption of the Bundesliga shows that the sport can push on safely in order to play the final 92 games.

As the old No. 22 attests, it won’t be the same for the Reds when they eventually seal the title—particularly having planned to parade the trophy on May 18—but it will be a triumph nonetheless.