Jurgen Klopp has lambasted the Government’s response to the coronavirus pandemic, with the UK having registered the third-highest number of deaths in the world.

The UK’s response to the pandemic has seen over 42,000 people lose their lives, with a slow reaction, the lack of widespread testing and the low availability of PPE all falling at the feet of the government.

And Klopp has struggled to understand the Conservative government’s muddled response as he watched his native Germany navigate their way through the crisis with mass testing and stricter rules – where aliens would “think we came from two different planets.”

His qualms don’t come from a position of his side’s Premier League title bid being in jeopardy after football was forced to come to a standstill, rather the rising death toll and the resulting effect on hundreds of thousands of people.

“I was not worried for one second that the ­Government could cost us the title because I was worried about the numbers who were dying – and I’m still worried,” Klopp said.

“I didn’t vote for this ­Government. This Government was the choice of other people. And the problem I had was that I got the news from England and the news from Germany.

“If aliens looked at us both from the outside, they would think we came from two different planets.

“From a personal point of view, I don’t understand why we started wearing face masks in closed areas on June 15 when five or six weeks ago all the other countries were doing it.

“You can argue about whether it makes sense to wear them, but all ­countries who started wearing face masks earlier have smaller casualty numbers than here in England. That’s the truth.

“When I see the numbers here in ­England and then in Germany, I think. Look, it’s not perfect in Germany, people have died and have been ill. But, in terms of living your life, it is completely different.

“If you want to enter a shop in Germany, but don’t wear a face mask, then you aren’t allowed in.

“With a face mask, you can go in all the shops you want,” he continued. “You can go to the hairdresser, wherever.

“I will not stop doing that until someone tells me it’s over. But inside the club, we are safe. We are tested twice a week and it is a safe ­environment.” 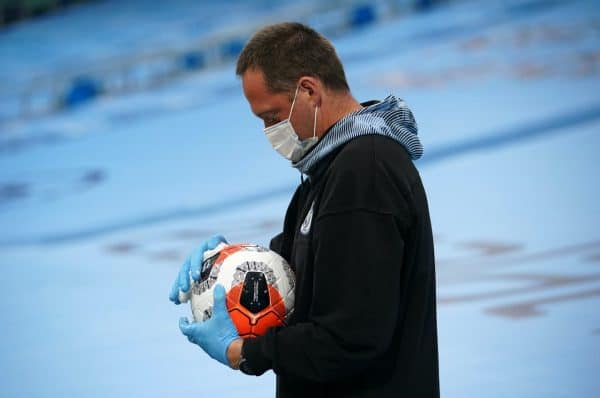 The Tory government is no friend to the city of Liverpool and Klopp’s words once again hit the nail on the head as to the mishandling of the pandemic – and again, it has little to do with his side and the title, rather the health of the population and the far-reaching implications each costly decision has.

“There were ­moments when null and void came up – and I thought, ‘Wow!’,” Klopp said in relation to the football.

“None of those reasons was selfish. All of them were because of football and because of the circumstances we were in.

“There are lots of people in the same situation. Can you imagine if we stopped football and cricket and rugby tomorrow? Think of all the jobs that would be in danger.

“We had to have it back and the truth is that the environment we have created inside the clubs now makes football safe.

“Outside the clubs? Yes, there are a few yards still to go.”

Klopp has previously voiced his political views, saying that “for me, Brexit still makes no sense” and that he is “on the left”.

“My political understanding is this,” he said. “If I am doing well, I want others to do well, too. If there’s something I will never do in my life it is vote for the right.”