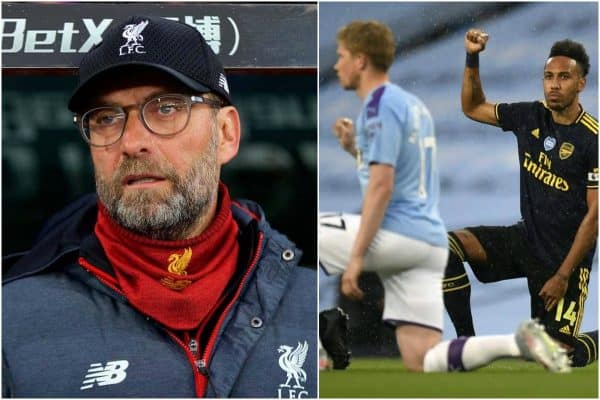 Jurgen Klopp has stressed that football’s place in society as a role model must be used to lead the way in the fight against racism.

Following the murder of African American man George Floyd in Minneapolis on May 25 by police, protests have taken place across the world calling for an end to institutional racism.

The Liverpool squad took a knee prior to a training session to share the message that “Unity is strength #BlackLives Matter” and all Premier League games in the first round will see players’ shirts bear the message “Black Lives Matter.”

At the start of every match so far, all players from both teams in the league took a knee prior to kick-off in an act of solidarity which sends a clear message to all those watching on.

Both Liverpool and Everton will join their colleagues on Sunday when the two teams take a knee in support of the protests prior to kick-off.

And it is football’s place in society which makes it the ideal vessel for equality, a point the boss made in an impassioned speech where he insisted that racism is “so unbelievably dumb.”

“This is absolutely a society problem and we have to show finally – and hopefully for the last time – that we are all the same,” Klopp said.

“It is just unbelievable that we still have to talk about it because things happen still.

“It is not that we just have discussions about black managers and things like this, we should talk about it in all parts of life in all leading roles… why should anybody make a difference between two people because of one thing that is absolutely not influential?

“I will never understand it, I have never understood it. But in this moment, it’s about making a clear stance from all of us.

“If football is a role model for anything in life then it is for that – for equality. Where everybody is exactly the same, wherever you come from, you are absolutely the same. It’s all about who you are, not which colour you have or whatever.

“I know from my point of view people may think it’s easy to say that, but it’s not easy for me. It is just for us in football that it is completely natural, and that is how it should be everywhere, judge people only because of who they are and not because of other things.

“It is so dumb, so unbelievably dumb not to do it like this, so it is really hard for me to even understand a little bit how it can be like this. But it is like this and so we have to stand up, or we have to kneel – whatever we have to do we will do.

“One hundred per cent we have to do it to solve this situation, for now and for the future. The past we can not change, but the future we can change and that is what we all should try.”

The boss was also quick to offer praise to the countless acts of kindness and movements for change which Premier League players spearheaded throughout the break, which included the Players Together charity and Marcus Rashford’s efforts in forcing a government u-turn on free school meals throughout the summer.

“What Hendo and the players did during the lockdown – I’m proud of the players, but I’m not surprised because I know that the players do a lot of things without really talking about it,” he added.

“I was not surprised the players were immediately ready to help in this difficult time.

“What Marcus Rashford did, I couldn’t respect it more, it’s unbelievable. It’s a little bit of a shame he had to do it. These things should be just natural.

“But there was something to do and he did the job in an incredible manner.”