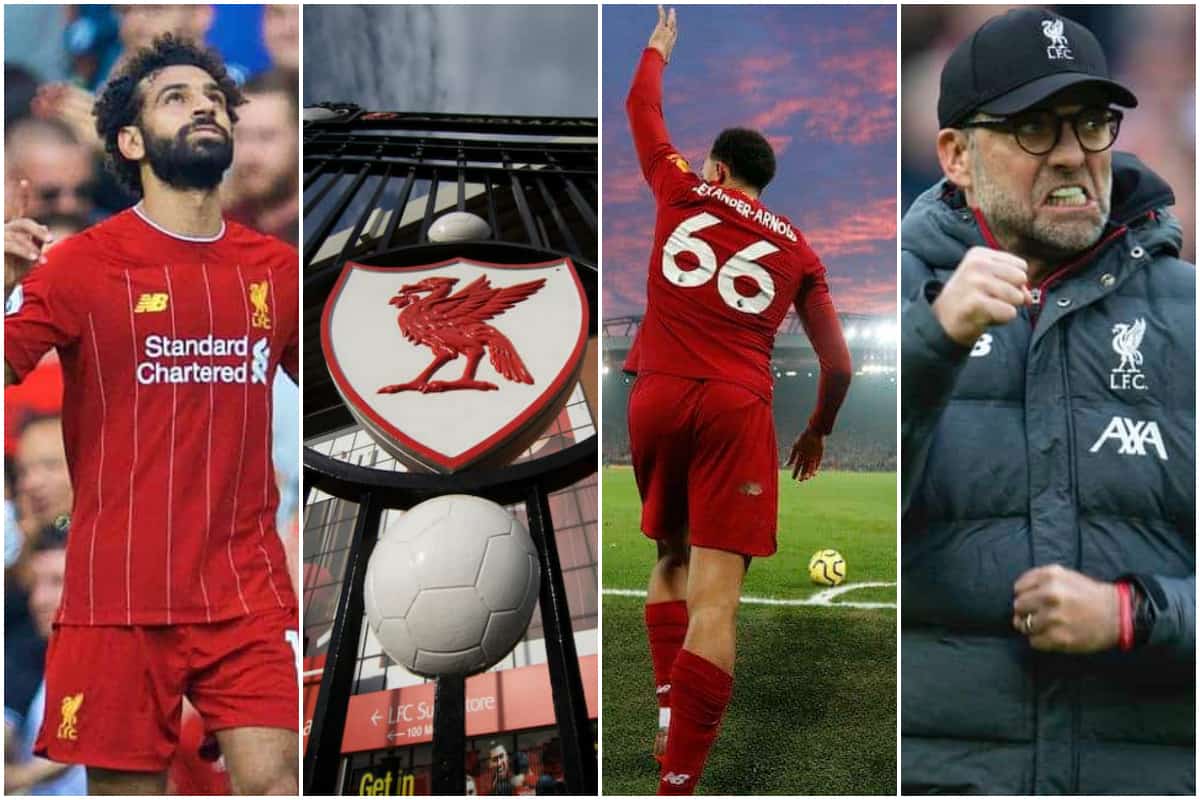 Liverpool are just six points away from a Premier League title, but there’s more to achieve too as we lift the coveted and long-awaited trophy.

Of course it’s all just about getting that title in the bag, hopefully winning the derby and crossing the line in style.

But in years to come when people look back at this—for many and varied reasons—entirely unforgettable season, the record books could show Liverpool’s name a few more times, too.

There are awards to be won and numbers to be broken along the way—the Reds, as a team and individually, could be clocking up another 10 between now and the end of the campaign.

We want to win every game, that’s standard. But few teams manage such incredible win streaks as the Reds have managed this term, and it puts us in with a shout of setting a new record points tally.

Right now, Liverpool are on 82 points, with another 27 still to play for.

That means a maximum of 109, easily a record—but going by our current points per game rate we’re on course for 107.

To smash that 100-point barrier, we need 19 points—or 2.1 per game. Six wins and a draw from the last nine fixtures would be enough!

The same again, but Europe-wide

Let’s aim even higher! The current record points tally for a team in the top five European leagues—Premier League, LaLiga, Serie A, Bundesliga, Ligue 1—is 102.

Seven wins from nine and we’ve set a new record there, too, beating the likes of Juventus in their league.

The Reds would also become only the fifth side from those leagues to reach 100 points in a season—Real Madrid and Barcelona are the other two.

The Reds are looking to set the first Premier League record which sees an entire season completed in perfect fashion on home soil.

We have 15 wins from 15 games so far at Anfield, with Palace, Villa, Burnley and Chelsea still to visit.

Additionally, while the Reds won’t break the Premier League‘s longest unbeaten home streak this season, they can keep adding to their run—it’s 55 matches so far.

Manchester City clocked up 16 away wins en route to a recent league title, which is a league record.

Jurgen Klopp‘s side have 12 from 14 so far, so there’s no more room for manoeuver if we want to set this particular record.

We face Everton, Man City, Brighton, Arsenal and Newcastle on the road to close out the campaign, so it admittedly looks a tall order to win every single one of them—but if any side can, it’s this Liverpool one!

Obviously, nobody could have foreseen the circumstances which have meant the Premier League campaign has run on far longer than expected.

It means whenever Liverpool do seal the title, it will be the latest date in history that the league has been won, and it’s probably one which will stand for a long, long time to come…assuming worldwide normality is resumed, of course.

…and the earliest title-winning date!

Looked at it another way, this should still end up being the quickest-won title too, or the successful league campaign wrapped up with most games to spare.

There were five games left when Man United won in ’01 and again when Man City were champions in ’18.

But Liverpool look set to smash this record.

We can do it with eight left if City lose on Wednesday and we beat Everton; seven if we simply win twice and get the six points needed, or even with six with another chance against Palace.

The Reds could also win the title if City drop points in any of their fixtures along the way.

How much of this lead will we hold? The Reds are 25 points clear, though that could be reduced to 22 by the time City play their game in hand on Wednesday night.

Even so, the biggest margin of points so far was 19 for City in 17/18, so we’ve got a little more margin for error in the run-in if needed.

But equally, we could feasibly see the Reds extend the margin further, depending on how different sides and squads react to the strange circumstances and rotation of lineups.

Mo Salah has been the highest (or joint-highest) scorer in each of the last two Premier League seasons and is in the running once more this term.

If he comes out first once more he’ll achieve the rare feat of being top goalscorer three seasons in a row—so far only achieved by Alan Shearer and Thierry Henry.

Salah has 16 to his name this term and is in third place; Pierre-Emerick Aubameyang (17) and Jamie Vardy (19) are ahead at present.

Last season, Trent Alexander-Arnold set a new record for the most assists by any defender in a Premier League season, with a frankly ridiculous 12.

So far this season he has already clocked up…another 12!

His insatiable appetite to create will surely see him surpass his own record, setting new ones in successive campaigns. As a side-note, he’s second in the league among all players, with only Kevin de Bruyne (16) ahead of him in the assist chart.

Finally, not technically a record which can be broken this season, but certainly a milestone can be reached and the hunt for the record can continue.

Alisson is currently one behind Burnley‘s Nick Pope for clean sheets kept by Premier League goalkeepers, 10 to 11, despite having missed much of the campaign through injury.

If our Brazilian goes on to make the most, he’ll be the first goalkeeper to win successive Golden Gloves awards in the Premier League since Joe Hart (2011, 2012, 2013).