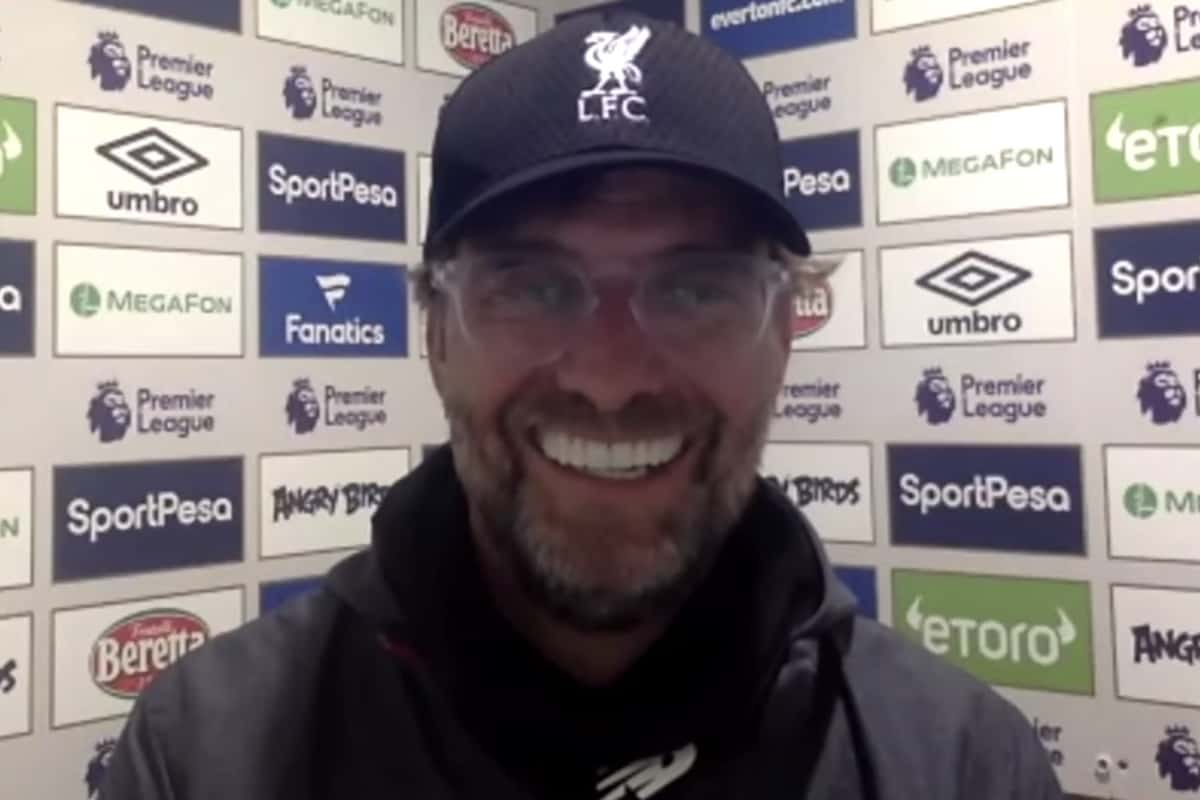 Jurgen Klopp took positives from Liverpool’s 0-0 draw at Everton, with his side looking “fit and ready,” but urged them to prepare for the visit of Crystal Palace in midweek.

The Reds would have hoped to enjoy a better result on their return from a three-month hiatus, but were held to a stalemate in the Merseyside derby on Sunday night.

It could mean that their title coronation is delayed, possibly until July 2 and the trip to Man City, but with triumph effectively wrapped up already this should be seen as a step in the right direction.

Particularly as it was played in strange circumstances behind closed doors, and 103 days after their last game, Klopp was understanding about the lack of “rhythm.”

“I liked the intensity level of the game from my boys, I liked the high-press, the counter-press, all these kinds of things,” he told reporters in his post-match press conference.

“What I didn’t like too much, but we cannot force that, was the rhythm.

“We had good football moments, absolutely, but not at the last moment, a free shot or whatever.

“So, we did have chances, that’s for sure, but that’s how it is.

“When I look back now, because this is my interview No. 7, I think, no crowd in the stadium but obviously all the journalists were allowed to come, and when I think about it I think all the derbies looked pretty similar.

“The result is similar, and at Anfield, all the games are slightly better, at Goodison it was always like this: two teams, aggressive, very physical

“We looked good, we looked fit, we looked ready, but now in three days we play another game against Crystal Palace and they are obviously in very good shape.

“They looked good yesterday [beating Bournemouth 2-0], we could watch this game, so we have to make sure we are ready for that.”

The manager also praised the performance of Naby Keita, and explained that he was impressed by Takumi Minamino and that his half-time withdrawal was pre-determined, as he aims to make use of his five substitutions.

He expressed hope that injuries to James Milner and Joel Matip are not too serious, but in all likelihood, the pair would have dropped out of the midweek clash with Palace either way.

Liverpool can aim for a stronger display on their return to Anfield, with victory the goal against Roy Hodgson’s side.