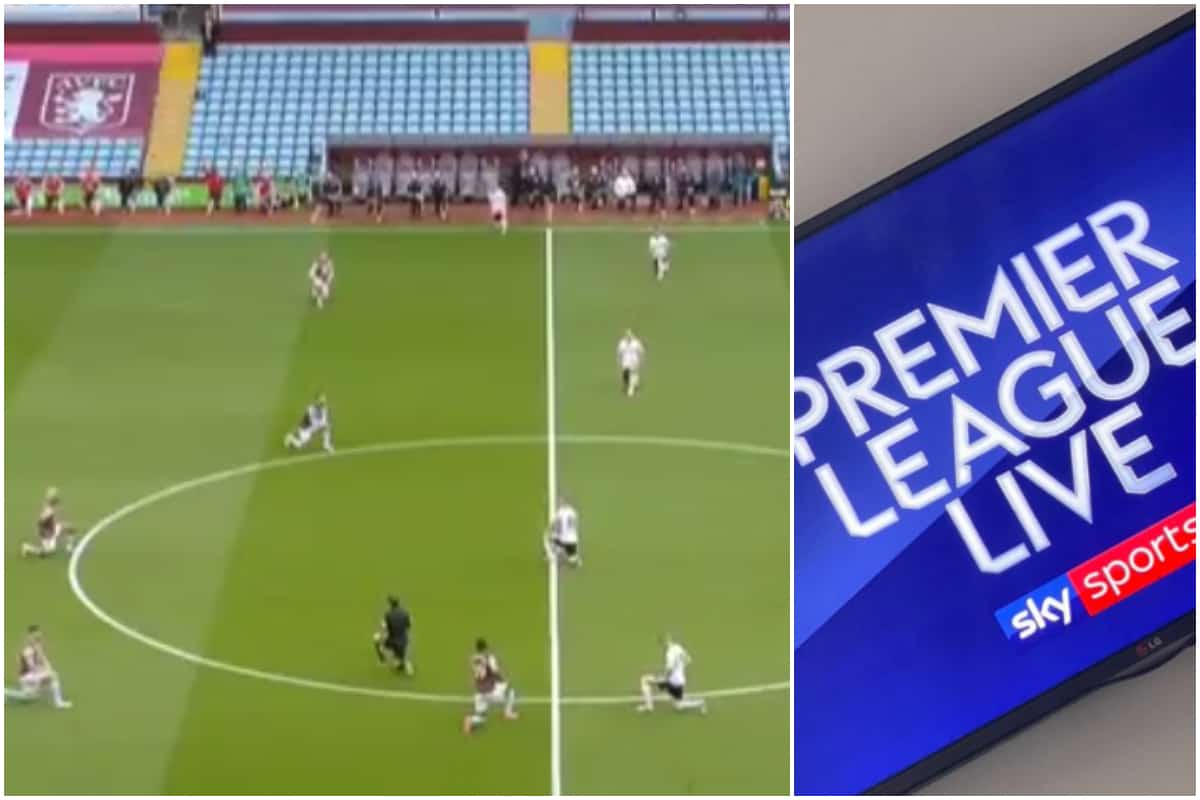 Fans had plenty to say as the Premier League returned on Wednesday after 100 days since the last game, as Aston Villa took on Sheffield United and Man City hosted Arsenal.

There was of course plenty to take in, with lots of changed approaches from normal match play—and an absolute age since the last time we watched English football at all.

No fans in the ground, the added artificial crowd noise, the impending return of Liverpool to the pitch and indeed the actual football on show were all discussed by fans as the Premier League returned.

Here’s the best of the reaction from Reds fans and football figures as the 2019/20 campaign got back underway in the top flight.

Naturally, many were delighted that English football was back

Can't believe how excited I am to watch a Villa game behind closed doors.

I’ve missed you so much @premierleague

What a fantastic way to re-start the season. #blacklivesmatter

The Premier League takes a knee ?

Absolute chills. On the blow of the whistle, every player takes a knee. #blacklivesmatter #AVLSHU pic.twitter.com/aqQClODH9m

Powerful image with all of the players taking a knee right before kick-off.

Actual shivers at every player taking a knee *after the game had started*. What a moment

The “crowd noise” overlay by the TV producers was met with extremely mixed reaction!

How we watching it? #AVLSHU

Thank God for that Dants. Thought i was listening to a wasps nest! https://t.co/QlyKVRkGnZ

Prefer to watch on Main Event with the crowd noise added. #footballsback

I like the crowd noise in the Premier League, it makes things feel a little normal.

Watching on UHD, not sure about this crowd noise? That shot had sound effects like it was scored, someone was trigger happy ?

I'm done with the crowd noise already. Over to the other channel.

The crowd noise seems to have a bit of a delay. And also seems a bit hollow. Doesn't sound as good as what has been on the Bundesliga.

Nice to see the @premierleague return tonight albeit Liverpool don't play until Sunday.

Covid has become such such a norm I'm not even arsed if we win the title in a empty stadium anymore.

We'll have a BIG parade when the time is right and all that waiting & anticipation will make it even BETTER! ??? #LFC #Liverpool

Football is back today, life is getting slightly better, all I need now is my 7373728/1 acca to come in at the weekend, up the reds

Four days until Liverpool are back on the pitch—and the countdown to the title is firmly back on!