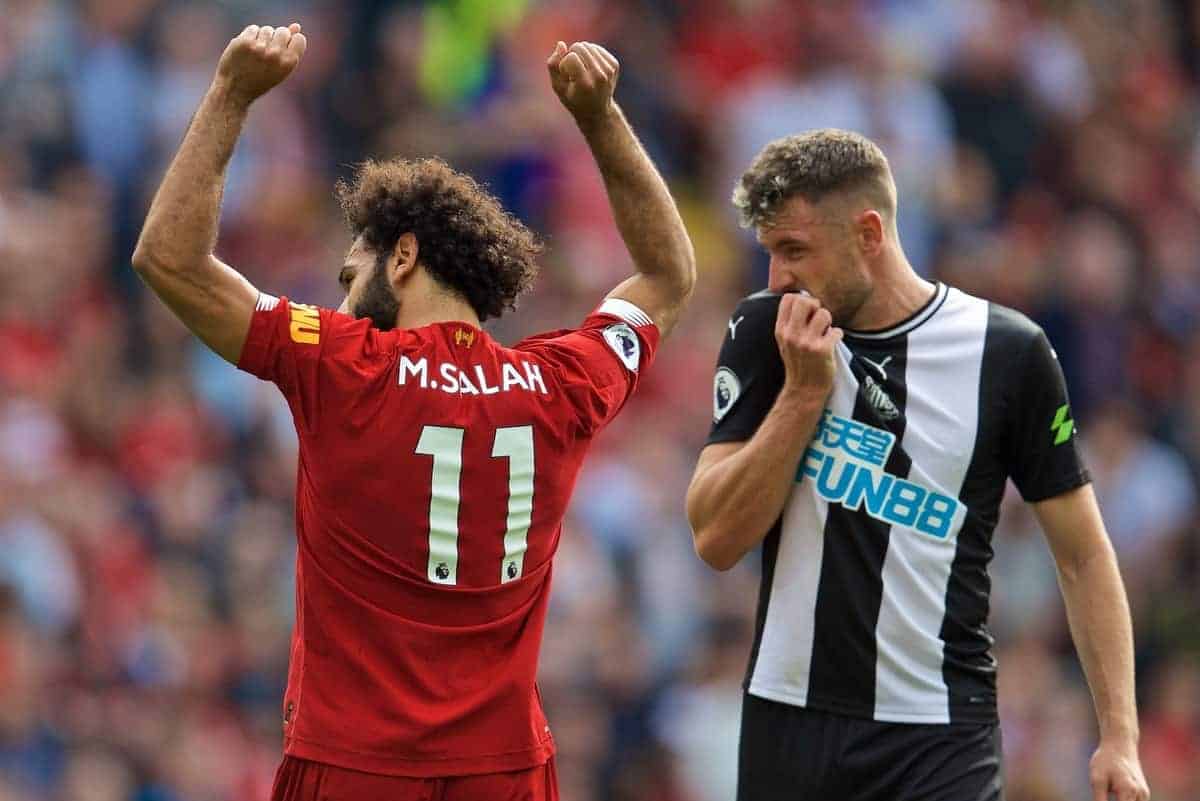 Liverpool’s last match of the 2019/20 season, the campaign where the Reds finally became the finest club in the country again, takes place away to Newcastle.

Have you stopped watching back the videos yet? Have you stopped reminding your mates, work colleagues, families and each other than Liverpool are champions of everything? No, us neither.

2019/20 was finally the year, our year, when the jokes had to stop, the accusations of the past were no longer relevant and when every excuse laid down by rival fans was simply swept aside with contemptuous ease.

Liverpool have been the single greatest domestic side in any of Europe’s top leagues this term—and it certainly hasn’t been even remotely close when it comes to England’s finest.

From unbeaten at Anfield (again) to breaking records for the biggest lead at the top in modern history, Jurgen Klopp‘s Reds have been not just better than everyone else, but in a different league, so to speak.

It all comes to a close on Sunday, when Liverpool can relax and enjoy a final outing as much of the rest of the division scrabble about for the last few points to get them over the line, or face the desolation and despair that they’ve missed out, not been good enough, must do better.

But 2019/20 has been ours, will forever be ours along with the footnotes of every ridiculous obstacle we had to overcome, and Sunday is the final page of that particular chapter.

Same as it was, basically. Jordan Henderson and Joel Matip are the two sidelined, while Adam Lallana and Dejan Lovren are unlikely to be played due to impending moves elsewhere.

The boss will have to make decisions over which players are given a final chance to shine, or a farewell appearance if, on the inside, they know another departure or two is likely.

Elsewhere, it’ll be the usual battles: do the kids get a chance? Is it Ox or Naby, Taki or Divock?

Wholesale changes are unlikely as the Reds look to finish on 99 points, but there’s a case to be made for one final bout of marginal rotation at least.

Newcastle are without Fabian Schar, Ciaran Clark, Jamaal Lascelles, Emil Krafth and Florian Lejeune, while Steve Bruce will have to make a late call on Isaac Hayden and Sean Longstaff in central midfield.

Last 5 away to Newcastle (all competitions)

Liverpool’s biggest-ever win at Newcastle came in April 2013 when we won 6-0.

The only player still at the club today from that match, and who scored twice on the day, just happens to be the man who has just lifted the Premier League trophy: Jordan Henderson.

Speaking in his pre-match press conference, Klopp said that the reaction this season after going so close in 18/19 was a special effort, but says that’s exactly how it should be and he’ll expect the boys to do exactly the same next term to keep the success coming.

“The season we played before, so 97 points and winning the Champions League is really a special year. I know that people will maybe struggle with that or told me that the reaction of the boys was exceptional.

“Yes, the reaction was really good but I think the reaction was like it should be as well. When you are that close, then you just have to invest more and then you can get over the line and that’s exactly what happened.

“We will stay greedy, we have to and we will. But if that then leads automatically to more trophies, I don’t know because other teams have other reasons to make the next step.”

The match will be shown live on BT Sport 2 and BT Sport 2 Extra. Kick-off is at 4pm and the coverage starts at 3:30pm (BST). Subscribers can stream on the BT Sport app.

As usual, Chris Williams will be keeping you entertained and up to date with all the match action on This Is Anfield’s matchday liveblog, starting from 3:15pm (BST).