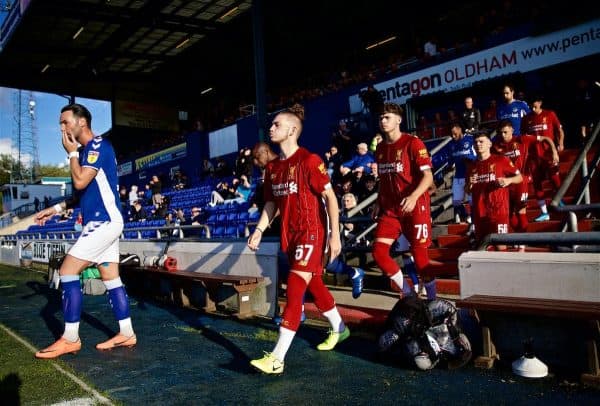 Liverpool’s under-21s will feature in the EFL Trophy for the second consecutive season and discovered their group stage opponents on Tuesday.

The tournament sees under-21s sides from ‘Category One’ clubs, which includes the likes of Man City, Chelsea, Leeds, Man United and Leicester against senior opposition from League One and League Two.

Liverpool are one of 16 ‘Category One’ clubs to join the competition for the second year in succession, where the Reds of 2019/20 did not make it out of the group stage having lost to Oldham and Accrington Stanley and drawn with Fleetwood Town.

While various members of the academy head out on loan for valuable senior experience, the EFL Trophy presents an opportunity for those who remain behind to taste first-team action and the physicality which comes with it.

And this time around, Liverpool, who form part of a four-team group in the Northern section, have been drawn into Group D, where they will face Port Vale, Tranmere Rovers and Wigan Athletic.

EFL sides had already been split into groups ahead of the draw on Tuesday, where the competition features a total of 64 teams, with these split into 16 groups of four and divided by north and south, where all ‘Category One’ clubs will play their group matches away from home.

The first group game will take place on September 8/9, the second on October 6/7 and the third on November 10/11, with Barry Lewtas to take charge of the U21s side after being promoted to U23s manager at the start of the summer.

The Reds could field a strong side throughout the competition, one which will have been bolstered by the opportunity at senior level in 2019/20 as 21 academy members made their first-team debut.

As ever, it will be dictated by those who leave on loan or permanently, with Adam Lewis set to depart in addition to Yasser Larouci and Morgan Boyes, the latter of whom has already joined Fleetwood for the season.

The Reds’ opponents are from both League One (Wigan) and League Two (Port Vale and Tranmere).

Port Vale finished eighth in League Two last season, while both Wigan and Tranmere were relegated after a points deduction due to entering administration for the former and a decision to conclude the season on a point per game basis for the latter.