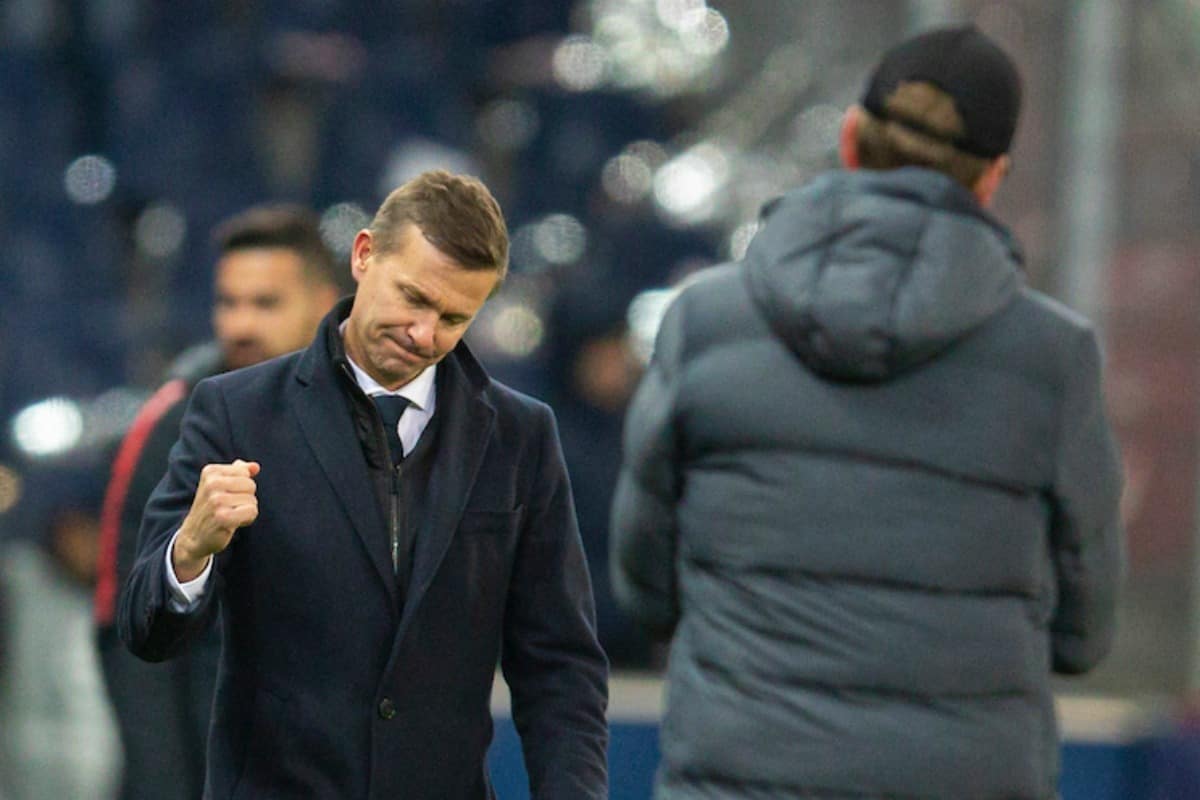 Liverpool have enjoyed a harmonious relationship with the Red Bull group in recent years, with Salzburg manager Jesse Marsch putting it down to similar priorities and style.

The Reds will meet RB Salzburg in their second match of pre-season on Tuesday in what will be the third meeting with the Austrian side in a 10-month period.

Jurgen Klopp‘s men toppled their Champions League Group E counterparts on both occasions to seal their passage to the knockouts, while three current Reds once plied their trade with Salzburg: Sadio Mane, Naby Keita and Takumi Minamino.

Liverpool’s relationship with the Red Bull Group also extends to RB Leipzig following the signing of Keita, where their overarching identity and eye for emerging talent falls in line with Klopp and Co’s philosophy.

It is for that reason that Klopp looks to players within Red Bull’s set up for the Salzburg boss, with Marsch quick to acknowledge that interest in his players from the likes of Liverpool should be viewed as “a big compliment.”

“I have even often said to our scouting department maybe the best way of thinking about how to scout players is to think about what leagues and clubs around the world play a similar brand of football to what we do,” Marsch explained to Goal.

“Maybe that’s a good starting point to think about how we can find good young players to integrate into what we do. Essentially, that’s the strategy that Jurgen Klopp has adopted and he has had success with that.

“I’ve been asked before about which players from Leipzig and Salzburg could join Liverpool right away, off the top of my head, I could pick five players from each side that would fit into Liverpool perfectly. Then, it would just be about adapting to the level.

“That’s similar to what Taki Minamino is going through right now, he is equipped with all the tools to play in that team and it is just about adapting to the level which things are done.

“I think this team takes it as a big compliment that a club like Liverpool and a coach like Jurgen Klopp thinks so highly of us.”

And ahead of the meeting with Liverpool, Marsch continued to share his appreciation and respect for Klopp’s work and the similar values he looks to embody at Salzburg.

But while only a friendly fixture to help both sides prepare for 2020/21, Marsch is hoping for a better result than the two which befell his team on the European stage.

“When I first took this job, they asked me what trainers and clubs do I think are right now doing a great job and my answer was Jurgen Klopp and Liverpool,” the Salzburg boss continued.

“It has so much to do with his way of leading his group and the way he coaches his team to play.

“It fits a lot with the things we are trying to do here. It is a little bit different in some of the details in both who I am, who our club is and the way we play, but at the same time, I think there is an appreciation.

“I have always had an appreciation. The beauty of us competing together is that I think Liverpool as a club and Jurgen Klopp as a coach gathers more respect for what we do. So, in the end, an opportunity to play against each other again, when it came up was exciting for us.

“Let’s see how much we learned in our games against them and if we can perform a little bit better, even though it is a friendly.

The Reds will meet Salzburg at the Red Bull Arena on Tuesday (August 25) for a 3pm (BST) kick-off, where 1,250 fans are set to be in attendance.