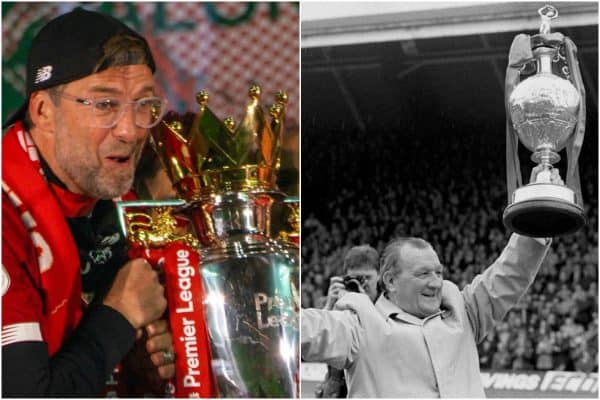 Liverpool legend Ian Rush has drawn comparisons with the mentality and team camaraderie of Bob Paisley’s sides in the 1980s with that of Jurgen Klopp‘s champions.

Liverpool’s most prolific goalscorer was a key cog in the success the club achieved in the ’80s, a member of five league title-winning sides in an era where having a winning mentality was non-negotiable.

Alongside that was a team spirit which propelled the Reds to highest of highs both domestically and in Europe, where it is, to borrow Klopp’s adage, all “about pushing the train, not jumping on the running” one.

In Rush’s era, the most successful period in Liverpool’s history, the standards and mentality were instilled by the likes of Paisley, Ronnie Moran, Kenny Dalglish, Graeme Souness and Joe Fagan.

And when you fast-forward 30 years you can draw parallels between the two teams’ road to the top of not only English football, but European and the world – with Klopp, Jordan Henderson, James Milner and Virgil van Dijk helping to lead the way.

“The team spirit [has been key to the current success],” Rush said in an all-encompassing chat with five lucky Liverpool fans as part of a Lavazza digital breakfast.

“I think what Jurgen Klopp has done is managed to get a great team spirit going, they are individual players but he’s got them to play as a team,” says Rush.

“I remember when we played in the ‘80s under Bob Paisley, he said: ‘The easiest thing is the XI that starts, the hardest thing as a manager is keeping the people who are not playing happy.’

“That’s a sign of a good spirit, because if you’re not playing you want the team to lose because you want to get in the side.

“In the ‘80s, even the players who were not playing wanted the team to win. And I can see exactly the same in this squad as well. Jordan Henderson, his leadership has been absolutely fantastic.

“And I just think it’s a complete utter team spirit that comes from the manager.”

In celebration of @liverpoolfc becoming Champions of England, we brought together 5 lucky Liverpool FC Fans along with #LFC connoisseurs @thisisanfield and @rambofyi to chat about the winning season. They were joined by Liverpool Club Ambassador @IanRush….and a great cup of Lavazza coffee!

It’s not in Liverpool’s DNA, however, to reach the top and put on the breaks, in fact, it’s quite the opposite.

Ronnie Moran’s dressing room move with the league winners’ medals is well documented and for Rush, it was an early eye-opener into life at Liverpool and how success was measured by what came next.

“I remember when I first won my medal it was against Tottenham and I remember Ronnie Moran put the medals on a chair and said: ‘Right, anyone who thinks they deserve a medal come and take one’,” Rush recalled.

“And myself and Ronnie Whelan were only youngsters at the time and we panicked so badly. The only two that got up were Kenny Dalglish and Graeme Souness, and me and Ronnie wouldn’t get up.

“Then he said ‘I’m only joking, go and get your medals.’ So we got our medals and as soon as we put them around our neck, he said: ‘don’t worry, it’s three weeks and four days until pre-season – enjoy yourself now but be ready.’

“And that was Ronnie Moran all over, he made sure you kept your feet on the ground.”

Alex Oxlade-Chamberlain notably echoed that sentiment when he questioned: “what’s the next thing we can go and win?” after the Premier League trophy presentation, as the job is far from over.

But the challenge for the Reds now is that “everyone wants to beat Liverpool. Paisley told us is that ‘the easiest thing is winning it, the hardest thing is retaining it.’”

Rush won three First Division titles in a row from 1982 to 1984 and his insight into the Reds and the various legendary figures is one to be cherished.

Alongside discussing the current Reds, in the brilliant chat with five fans, Rush also discussed his relationship with Bob Paisley, his pride over his goals against Everton taking prominence in ‘Poor Scouser Tommy’ and his short time short in Juventus.

* Lavazza UK are Liverpool’s official coffee partner, their LFC-branded Tiny Edition coffee machine is currently on offer, get yours here.