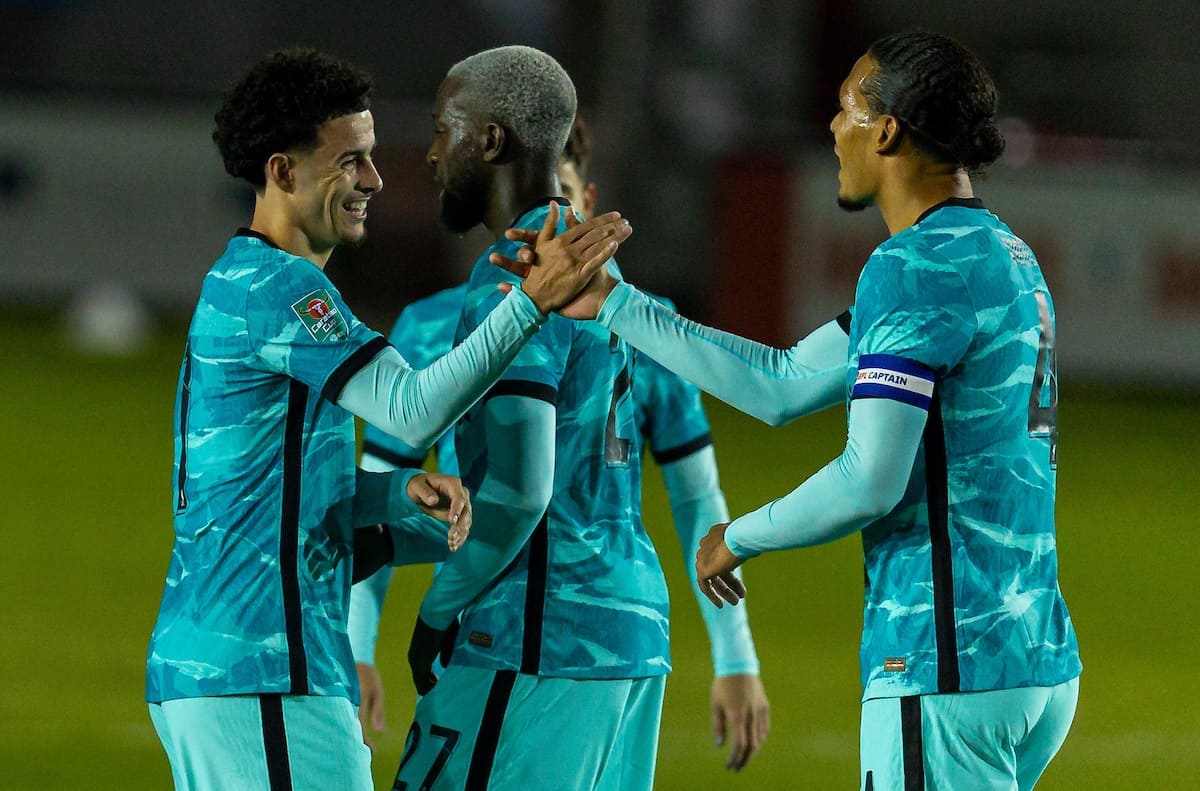 Liverpool booked their meeting with Arsenal in the fourth round of the League Cup with a 7-2 victory away to third-tier opponents Lincoln the third round on Thursday.

Ahead of the game, Pep Lijnders insisted Liverpool would field a “surprising” team at Sincil Bank, and this was certainly the case as Jurgen Klopp made 10 changes and handed Rhys Williams and Kostas Tsimikas their debuts.

The retention of Virgil van Dijk served to intimidate the League One opposition, as the Reds took control of the game from kickoff as expected, lining up in a 4-3-3 with Takumi Minamino up front.

Xherdan Shaqiri, whose last start for the club was in December, put the visitors in front in the ninth minute, curling a sensational free-kick into the top corner with his wand of a left foot.

Minamino put the Reds 2-0 up soon after, and it came in miserable fashion for Lincoln as they attempted to play out, with Lewis Montsma pressed and forced into mistake that allowed the No. 18 to curl home first time into the same top corner.

A brilliant long pass from Rhys Williams laid on the third, with Divock Origi heading down the 19-year-old centre-back’s ball for Curtis Jones to finish with aplomb.

Jones reached his five-goal landmark for the club soon after, cutting inside onto his right and firing an effort into the same area via a deflection, with Lincoln dismantled time and time again.

A planned substitution saw Fabinho replace Van Dijk at the break, and within seconds of the restart Minamino had made it 5-0, with more high-intensity pressing forced a move finished off by the Japanese after Harvey Elliott‘s shot was blocked.

Lincoln rallied soon after, which will have encouraged manager Michael Appleton, but fortunately for Liverpool, Adrian produced a convincing case for his continued run as second-choice goalkeeper.

Diogo Jota was given just over half an hour to make an impression on his debut, just five days after becoming the fourth-most expensive signing in Liverpool’s history.

The hosts grabbed a goal back before Jota could make his impact, though, with Rhys Williams short with two tackles in the buildup as Tayo Edun slotted into the bottom corner beyond Adrian.

Grujic capped an impressive, composed display with a goal of his own soon after, before Montsma pegged another back for Lincoln, with the makeshift nature of Klopp’s back line allowing gaps for the League One side to exploit.

Klopp looked decidedly relaxed in the Sincil Bank dugout as the game ended with an Origi strike, with Liverpool comfortably setting up a fourth-round tie with Arsenal next week.