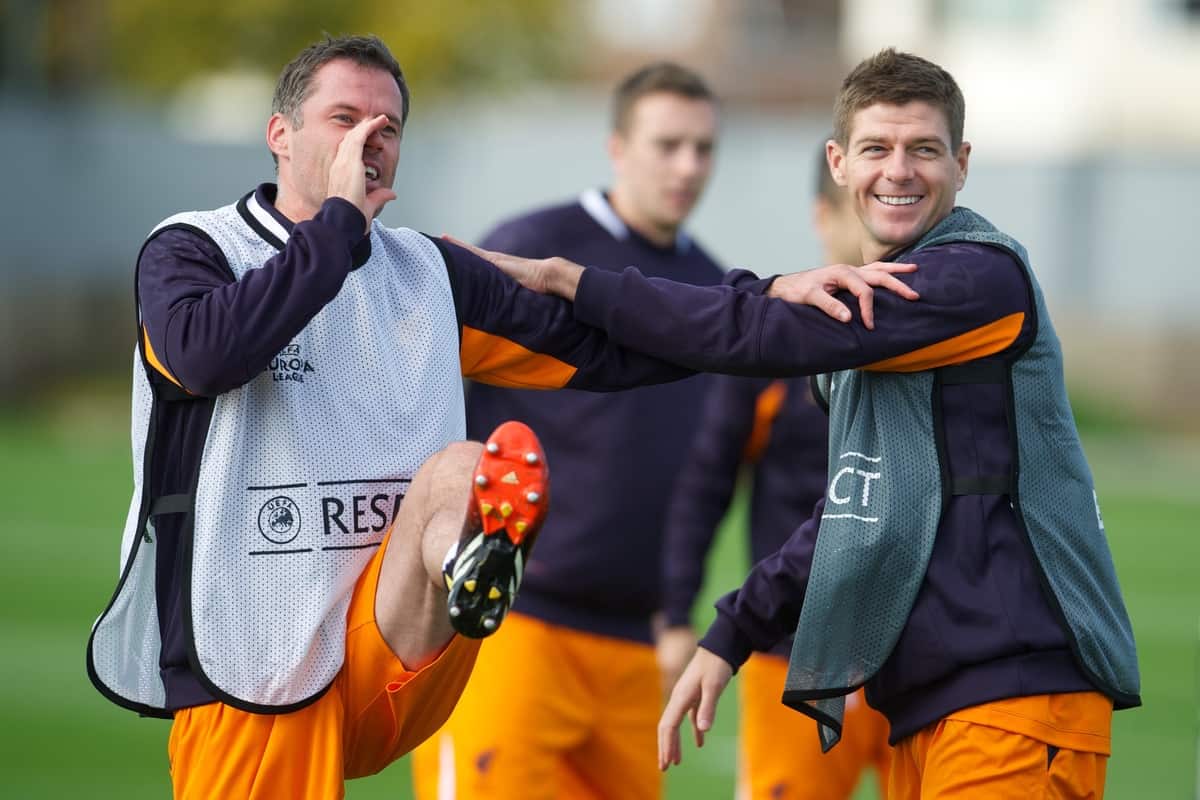 As Liverpool leave Melwood for their new training ground in Kirkby, Steven Gerrard, Jamie Carragher and a host of former and current Reds have shared their memories.

The Reds trained at Melwood for the last time on Saturday, with the AXA Training Centre their new home after the international break, following a £50 million redevelopment.

It is a big step for the club, having trained at the site since the 1950s, but it is one that is seen as a necessity as they move forward, particularly as the new facility will encompass all age groups.

Nevertheless, the move from Melwood is a bittersweet one for all involved, including those who are no longer at the club, like Gerrard and Carragher.

The legendary duo were among those to take to social media to share their fond memories of Melwood, with Carragher telling some brilliant stories from his 26 years visiting the training ground, starting as a nine-year-old:

I first came to Melwood in 1987 as a 9yr old, so many games & training sessions to remember?Shankly’s shooting boards, not being allowed to walk on the A team pitch, Gerry Blayney coming in to give new managers a silver salva, Heighway & McCauley coaching us as 9yr olds, Steve getting me in his office asking me not to go to Lilleshall, Houllier getting me in his & asking about a Xmas Party ??? Pepe Reina nearly killing Rafa after hitting him with a ?? playing in the famous staff games where the staff never lost a game in over 50 yrs! Driving to Melwood after I’d retired ???? all the characters who used to pop in or work there from Big H, Barry, Kenny & Jack on the gate, the two Carols & Anne who was the only person who was there on my first day until my last ? and finally, watching Ronnie Moran bellowing at players as a coach & then coming back years later to do his laps of the perimeter, name this place after Ronnie please @liverpoolfc A tough schooling but the best schooling. #football #melwood

Other tributes to stand out came from Luis Garcia, Daniel Agger and Lucas Leiva, showing the affinity with Melwood extends beyond those who were born and bred on Merseyside:

Let me open a thread to farwell Melwood training groud.
It wasn't just our training ground, it was like our home. We had breakfast, lunch, we played pool and table tennis, we even slept there sometimes. When we came from Istanbul… pic.twitter.com/kLBckXvtRf

we went straight there with our families before going around the city with the trophy. If we had a dinner during the week, we used to meet there before moving or for the costume parties… pic.twitter.com/1Rn818Skjm

That was the meeting point.@LFC
Is moving to a fantastic place, where new legends will have beautiful memories and an perfect atmosphere to train and develop new talent. So happy for them.
Melwood will be missed for many generations of players. Thanks for looking after us !! pic.twitter.com/mQ1a27FL02

I almost spend 9 years at Melwood and it’s definitely one of the places I miss the most.
Not really the facilities but more the people in it.
I could keep going. The place was magic. Especially for a 21 year old boy from Brøndby. ???. Y.N.W.A pic.twitter.com/Z1I7GFx8hq

I spent 10 years at Melwood!The quality of the people there was incredible.
The security guards,Carol and Caroline ?? from the kitchen,players Liaison,Press Office and my teammates.
I am sure the new training ground will be like home just like Melwood was for me.
Good Luck LFC! pic.twitter.com/UMOONcDxAZ

But many have come from closer to home, too, such as Roy Evans, who came through as a player in the early days of Melwood and went on to manage the club:

End of an era today as @LFC leave the Melwood Training ground. I was lucky enough to spend so many wonderful years there with some of the best players, managers, coaches and staff in the game. Memories i will always cherish. pic.twitter.com/DsHOvOyMt8

Ian Rush, Michael Owen, Terry McDermott, Jason McAteer, Neil Mellor and Jay Spearing were among those to reflect, with McDermott recalling how he “sweated many a pint of lager out on that turf”:

I turned up at this place 30 years ago. Little did I know that it would provide me with the memories of a lifetime. So many great people walked through those gates. And so many friendships formed. Thanks for the memories. #Melwood pic.twitter.com/vmFPUdkq1n

Farewell to the great Melwood, sweated many a pint of lager out on that turf and have some fantastic memories of the place in the 70-80’s era #lfc @LFC pic.twitter.com/AGxhfGwqZ8

Gutted to see Melwood go. Part of the @LFC DNA. Where Shankly dared to dream and Legends graced the turf. Absolutely honoured to just be a little part of it. Thank you I’ll never forget #memories #LFC #LFCfamily pic.twitter.com/VUcH58tlVw

Melwood.. The Place, The People And The Memories ???? @liverpoolfc

And there were others from the current squad, most notably Jordan Henderson, who shared photos of his last trip to the training ground, James Milner, who filmed his walk out, and goalkeeping coach John Achterberg:

Left Melwood for the last time today, thank you for the memories ? #Melwood #YNWA pic.twitter.com/Q1r1ssEZD7

Last day for me today @LFC great Melwood I worked 10 years with keepers players staff and managers ! What a history is left behind here ! Now positive looking at the new place at Kirby were the club will recreate more legends and history! ???? YNWA #Melwood #LFC #Legends pic.twitter.com/2Ucys1aKaD

Melwood has been a part of Liverpool for almost 70 years, and it is clear that it has had a huge impact on those who came through it, particularly with the staff who made the players feel at home.

But while the Reds will leave behind their history, as Jurgen Klopp summed up: “The good thing is a place is always only as good as the people in it, and we will take them all to Kirkby.”