Gini Wijnaldum has now scored as many goals in his last 20 games for the Netherlands as Harry Kane has for England, with yet another in Wednesday’s 2-1 win over Poland.

Captain in the absence of Virgil van Dijk, Wijnaldum has stepped up to take the burden for Frank de Boer’s side, and has continued his excellent form through the international break.

After a brace in the 3-1 victory over Bosnia-Herzegovina on Sunday, the 30-year-old made his third start in a week as Poland played host in midweek, having already started in a 1-1 friendly draw with Spain the previous Wednesday.

He lined up in an advanced midfield role, with Davy Klaasen and Frenkie de Jong again providing the stability as the deeper two-man unit, with Memphis Depay leading the line up front.

It did not start well for the Netherlands, however, with Derby winger Kamil Jozwiak putting Poland 1-0 up with a brilliant solo goal in the fifth minute.

The post denied Przemyslaw Placheta soon after, while Klaasen was unable to get anything on a smart ball over the top at the other end, but fortunately the momentum shifted after the break.

Lukasz Fabianski saved well from Depay’s low effort, before Steven Berghuis fired wide from range, and in the 75th minute Jan Bednarek was adjudged to have fouled Wijnaldum in the box.

Depay stepped up to convert the penalty, and seven minutes later Wijnaldum had scored the winner, this time a header from Berghuis’ corner. 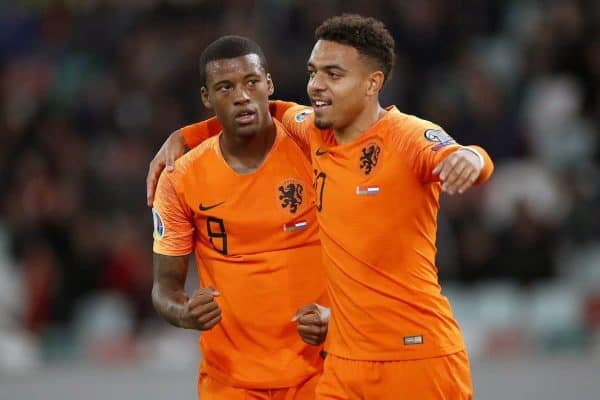 It was the 13th goal Wijnaldum has scored in his last 20 games for the Netherlands which, remarkably, is the same tally Kane has managed in his 20 most recent outings for England.

While there is no direct comparison between the two, of course, it is an interesting parallel to draw given how prolific the Tottenham striker is on all levels and how typically quiet the No. 5 is in front of goal for Liverpool.

Wijnaldum plays a different role for the Netherlands, but it is still hugely impressive how often he is able to get his name on the scoresheet.

Once again, he paid tribute to the injured Van Dijk with his celebration, and having made it through another international break with no fitness issues, he can resume his influential role for the Reds on his return.