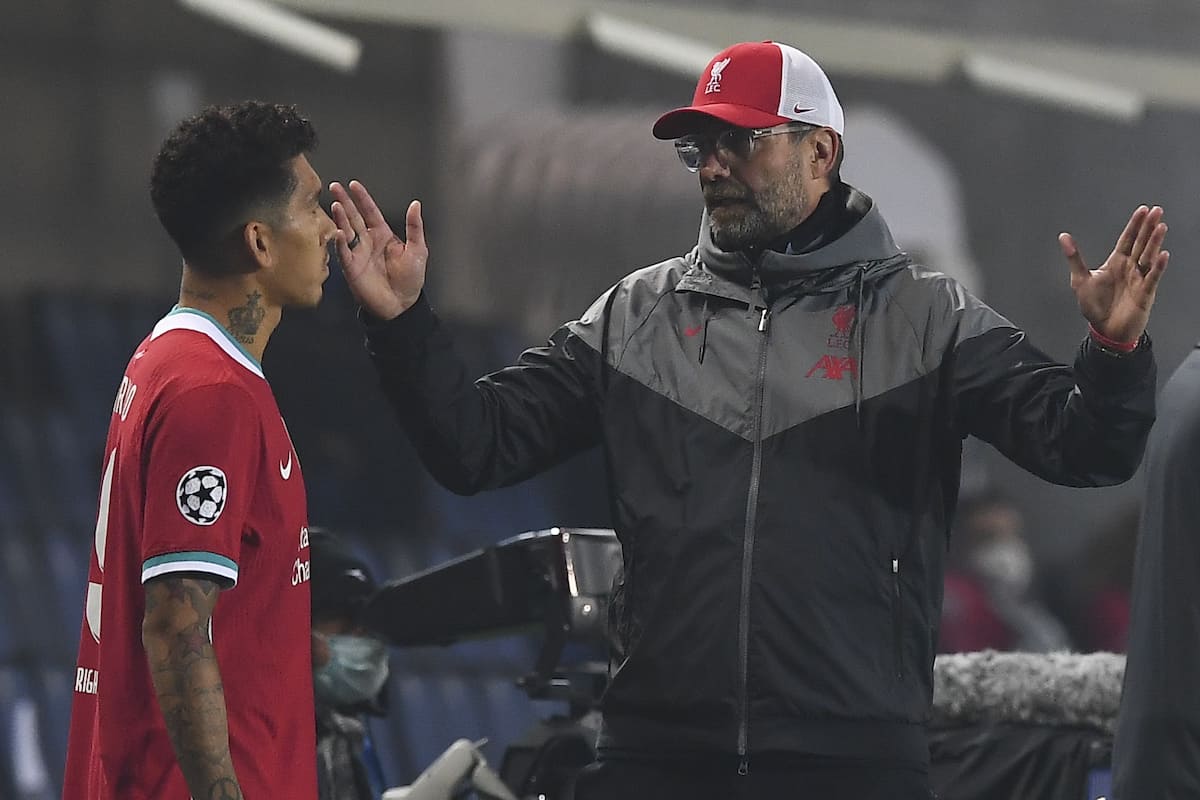 Jurgen Klopp has rejected criticism of Roberto Firmino‘s form, and in particular within the context of Diogo Jota‘s hat-trick as Liverpool surged to a 5-0 win at Atalanta.

Firmino has not been at his best of late, and ahead of the Reds’ trip to the Stadio di Bergamo, there were widespread calls to drop the No. 9 from the starting lineup.

Klopp did, in fact, omit the Brazilian, with Jota taking his place in the side and scoring a treble as he led the line excellently and interchanged freely with fellow goalscorers Mohamed Salah and Sadio Mane.

Unsurprisingly, this led to a suggestion in the manager’s pre-match press conference that Jota would give Klopp a “headache” when it came to choosing his side moving forward, with the inference being his inclusion would come at the expense of Firmino.

However, Klopp stressed that “good performances never give me a headache,” and questioned the need to even focus on a player who did not start when Jota produced such an emphatic display.

“For tonight that was the decision, it was clear it makes sense for tonight, first of all to use the good shape Diogo is in,” he explained.

“And because of the way Atalanta plays and defends, it made sense that the skillset of Diogo helps.

“But the world is sometimes a really bad place that in the moment when somebody is shining, we speak immediately about another player who played for us, it feels like, 500 games in a row.

It remains to be seen who starts for Liverpool’s trip to Man City on Sunday, though Jota will be top of the list for many at least working outside of the confines of Melwood.

But there would be no surprise to see Firmino return to the starting lineup, with Klopp reinforcing his belief in the striker and dismissing claims of a drop in form.

“He will be in the team and for a lot of people in the world, if you would ask them, ‘what makes Liverpool some days special?’, I would say the way Bobby Firmino is playing because on a good day he is not to defend,” he continued.

“For us, it’s important that we have more than 11 and tonight Diogo used his shape in an incredible way and played a super, super game.

“But that says nothing about Bobby and has nothing to do with me causing headaches.

“I’m more than happy that the boys played like they played tonight.”